These Portuguese coconut custard tarts, made with coconut, milk, eggs, sugar, butter, lemon, and cornstarch, are a classic that meld the best parts of a creamy custard and an eggy macaroon. Best ever. 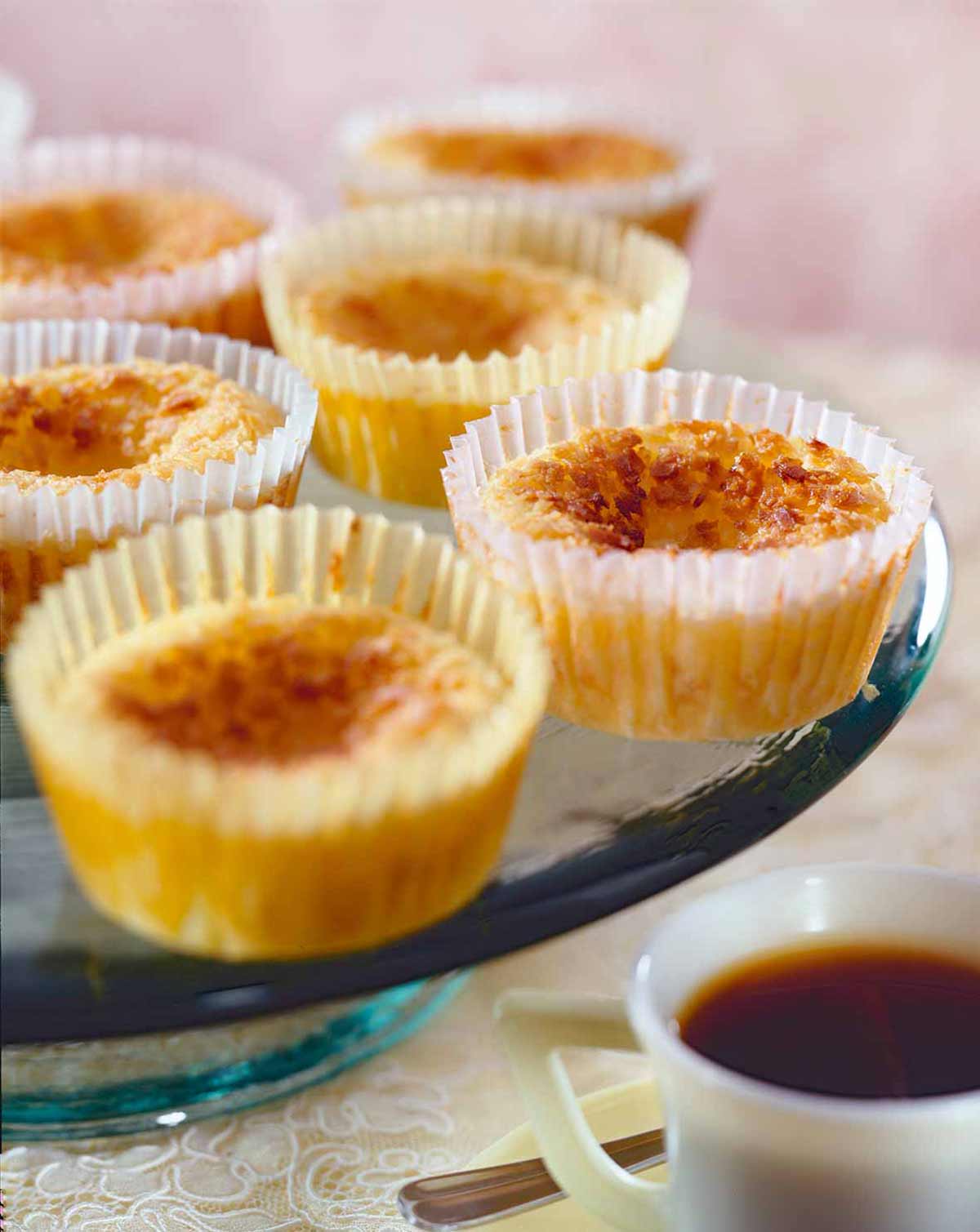 Preheat the oven to 375°F (190°C). Adjust the oven rack to the middle position. Line a 12-cup muffin tin with 11 paper cupcake liners and, if desired, coat the inside of the liners with the nonstick vegetable spray oil.
☞ Tester tip: Or, to avoid the tarts sticking to paper liners, you can do what reader Olga DeMedeiros did and rely on foil cupcake liners sprayed with nonstick vegetable spray to ensure the tarts slip out easy peasy.
In a small bowl, dissolve the cornstarch in 1/4 cup milk.
In a food processor, shred the coconut flakes for 30 seconds.
In a large bowl, stir the eggs and sugar together with a wooden spoon. One by one, add the cornstarch mixture, the remaining milk, the coconut, melted butter, and lemon extract, stirring well after each addition.
Ladle the custard into the paper cups, filling each 1/4 inch from the top. Make sure to stir the custard frequently as you’re filling the cups to keep the coconut well distributed. You’ll be able to fill 10 to 11 liners.
Bake for 25 to 30 minutes, until the coconut is nicely toasted. Cool completely in the muffin tin before serving. Originally published March 10, 1999.
Print Recipe

This recipe is really good. My daughter refused to share them with the extended family. Moreover, we waited for these to cool ever so slightly on day one and then just ate them plain. That afternoon we tried some with jam. The last couple days, my daughter has been eating them both with and without jam. Jam or no jam, these are delicious. The verdict is that this recipe is easy and fantastic.

Serving these tarts a little bit warm is better than completely cold. Note: Look closely at the picture. There is a little dip in the top. The recipe is a custard with no flour to hold it up structurally, so there is definitely a place for jam (hence the accurate use of the word "tart").

One per person was plenty due to sweetness.

These pastries are a perfectly lovely springtime dessert. As they bake, the batter puffs up and separates into a crispy toasted coconut topping with a sweet smooth custard underneath. As they cool, the center collapses slightly creating a nest. It would be fun to fill the hollow with some small jelly beans or chocolate eggs for the Easter holiday.

As far as flavor, I think the recipe could benefit from some added salt. It does include some lemon extract, but I don't detect any lemon flavor. Maybe adding some lemon zest would help, as well. Peeling off the paper muffin cups there is some sticking and I wonder if these would be better made and served in small ramekins and eaten with a spoon.

I was tempted to remove the tarts at 23 minutes because coconut was getting brown on tarts at back of oven. I opted to turn the pan and leave them in for the full 25 minutes and it was fine. I would probably recommend turning the muffin tin, half way through baking time, to promote even browning.

With no more effort than making some coconut haystacks, these coconut tarts come together easily and deliver a beautiful little tart that tempts you to eat more than one. They have a much more special flavor and texture than my back pocket cupcake recipe, and if you have the coconut on hand, you're ready to go.

Almost as soon as you remove these from the oven, the golden brown top begins to sink in front of you (and suggests a berry or two, or maybe a dab of lemon curd would be welcome). The slight bit of lemon extract works well without standing out.

Once upon a time, it seemed like all the coconut on grocers shelves was sweetened. Now it takes a search and you might easily come home with unsweetened accidentally as it's much more common now. Now, at least if you shop places like Whole Foods or other "healthy-ish" places, all you will see is unsweetened versions, all organic, PBS-watching and polite! Today, to find sweetened you end up with store-brand versions in more traditional stores, like Raley's or Nob Hill or Safeway, and certainly not organic. It is the kind most kids my age grew up with if they made coconut haystacks macaroons or German Chocolate cake, when sugar was not considered evil! Do not worry—you can use unsweetened (although you may need to process it more like a minute instead of the 30 seconds for the sweetened, which the recipe was written for).

So partly to address the fact that more than once, we have thought we were buying sweetened coconut only to realize we misread the package, I thought it was worth trying the recipe both ways (no need to "sweeten" the unsweetened version, though, since the recipe ran a bit too sweet for us). I made them both ways, and we liked the slightly less sweet result a bit more. In a third batch, I also reduced the sugar about 20% and we preferred that level of sweetness without sacrificing any texture. I think the unsweetened coconut browns a bit sooner, as there is more fat in the coconut.