Chocolate babka fans, rest assured, this is not a lesser babka. Instead it’s practically oozing with chocolate and butter and homemade babka-y awesomeness. 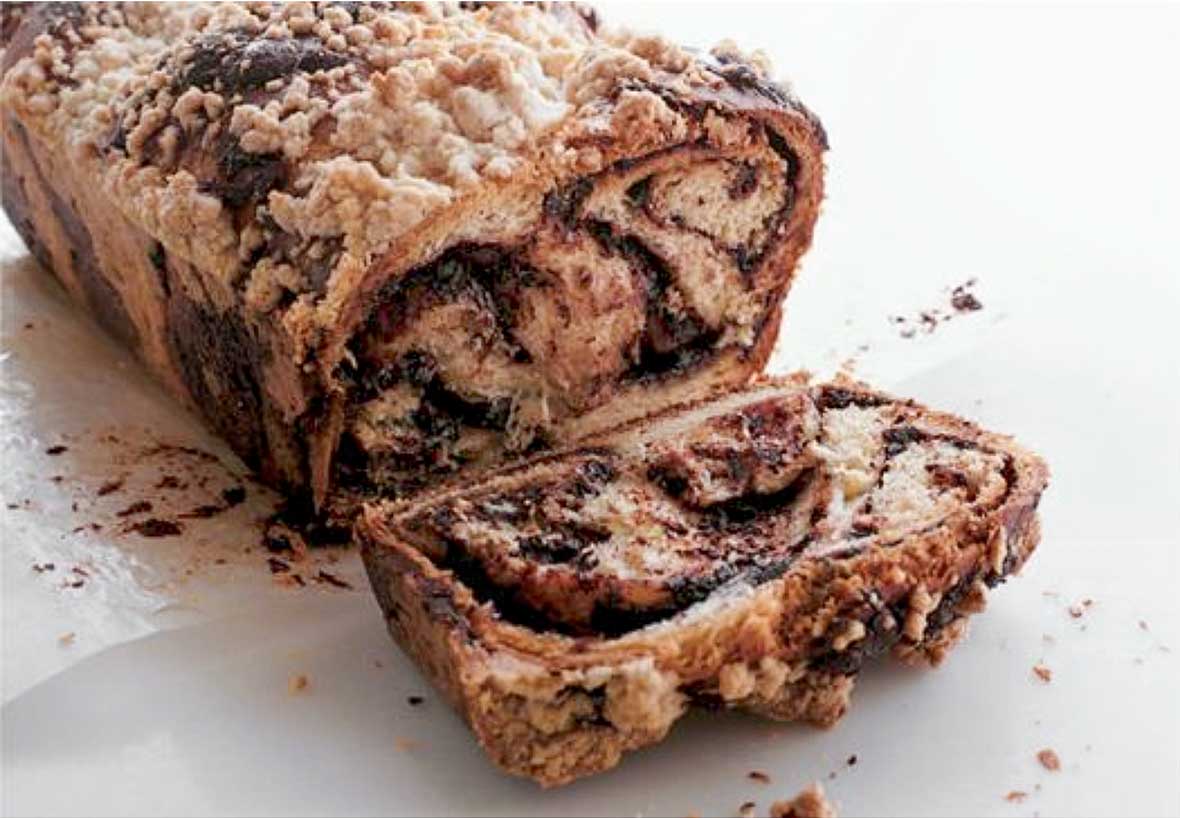 Know what makes this chocolate babka recipe not only memorable but the best babka ever? Butter in blissful abundance and more than two pounds of chocolate. Fat phobes and calorie counters, take comfort in the fact that this chocolate babka recipe makes a few loaves. So if you do the math, that’s a tablespoon (or three) of butter per slice, which seems reasonable enough to us. And Seinfeld fans, it draws on both chocolate and cinnamon, ensuring it’s not a lesser babka.–Renee Schettler Rossi 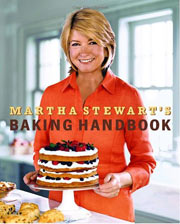 Make the chocolate babka dough
Pour the warm milk into a small bowl. Sprinkle with the yeast and a pinch of sugar and let stand until foamy, about 5 minutes.
In a bowl, whisk together the sugar, 2 of the eggs, and the egg yolks. Add the egg mixture to the yeast mixture and whisk to combine.
In the bowl of an electric mixer fitted with the paddle attachment, combine the flour and salt. Add the egg mixture and beat on low speed until almost all the flour is incorporated, about 30 seconds.
Change to the dough hook. Add 2 sticks of butter and beat until the butter is completely incorporated and the mixture forms a smooth, soft dough that’s slightly sticky when squeezed, about 10 minutes.
Turn the dough onto a lightly floured surface and knead a few turns, just until smooth. Butter a large bowl. Place the dough in the bowl and turn to coat. Cover the bowl tightly with plastic wrap and let rest in a warm place until doubled in size, about 1 hour.
Make the filling
In a large bowl, combine the chocolate, sugar, and cinnamon and stir to combine. Add the 1 1/2 sticks of butter and, using 2 knives or a pastry cutter, cut in the butter until well combined.
Asemble the chocolate babkas
Generously butter three 9-by-5-by-2 3/4-inch loaf pans and line them with parchment paper. Beat the remaining egg with the cream.
Gently punch down the dough and transfer it to a clean surface. Let the dough rest for 5 minutes.
Cut the dough into 3 equal portions. Keep 2 portions covered with plastic wrap while working with the remaining portion.
On a generously floured surface, roll the dough out into a 16-inch square that’s 1/8-inch thick. Crumble a scant 1/3 of the chocolate filling evenly over the dough, leaving a 1/4-inch border. Brush the border with the egg wash and, starting at one side, roll the dough up tightly like a jelly roll. Pinch the ends together to seal. Holding an end of the dough in each hand, twist it 5 or 6 turns. Brush the top of the roll with the egg wash and carefully crumble 2 tablespoons of the filling over the left half of the roll, being careful not to let mixture slide off. Fold the right half of the roll over onto the coated left half, then fold the ends of the dough underneath and pinch it to seal. Twist the roll 2 turns and nestle it into the prepared pan.
Repeat with the remaining 2 pieces of dough and the remaining filling. Don’t discard the egg wash just yet. (The babka loaves can be frozen for up to a month before baking. Remove from the freezer and let stand at room temperature for about 5 hours before baking.)
Make the streusel topping
In a large bowl, combine the sugar, flour, and butter. Using a fork, stir until the ingredients are fully combined and the streusel is in pieces ranging in size from crumbs to about 1-inch (25-mm) clumps.
Heat the oven to 350°F (176°C).
Brush the top of each loaf with the egg wash. Crumble 1/3 of the streusel topping over each loaf. Loosely cover each pan with plastic wrap and let stand in a warm place 20 to 30 minutes.
Discard the plastic wrap and bake the loaves, rotating them halfway through, until golden, about 55 minutes. Lower the oven temperature to 325°F (163°C) and bake until the babkas are a deeper shade of golden, 15 to 20 minutes more.
Remove from the oven and transfer the pans to wire racks to cool to room temperature. Turn the chocolate babka out from their pans and cut them into thick slices. Originally published December 16, 2011.
Print Recipe

“HOLY COW!” I said when I saw how much butter and chocolate the recipe calls for, and again when I tasted the babka. The texture is flawlessly half bread and half cake, and every bite has even swirls of chocolatey and just-eggy-enough heavenliness.

Those who don’t have a stand mixer or 3 loaf pans (join the club), don’t fret. You can make this babka. There was too much dough for the short hooks on my hand-held mixer, so I incorporated the butter into the flour and egg mixture mostly by hand, which didn’t take much time at all. I only have 2 loaf pans, so I froze 1/3 of the dough for later enjoyment.

The recipe does take a while from start to finish, so get your calendar out and plan an afternoon centered around this chocolate babka! It’s truly worth the effort and time.

OMG! I’ve died and gone to heaven! I love babka and have made it many, many times with numerous recipes, but this is THE ONE.

Not only was it delicious, but it seems to be indestructible. I made the dough and started to let it rise when I realized that I didn’t have enough chocolate, so I wrapped the dough in plastic wrap and put it in the freezer, where it sat for 3 days before I got out to buy more chocolate. I took it out of the freezer and started to let it rise when I had to leave home, so I put the bowl in the refrigerator and left it there for 4 hours. I thought I might have to redo the whole thing but the dough was fine. Very straightforward and easy to do.

When I first read the recipe I thought 2 1/4 pounds of chocolate and five sticks of butter will make anything taste good, but the cake part of it was just the right amount of lightness and sweet. The only problem, if you could call it that, was twisting and folding the dough after rolling it jelly-roll style. My dough just didn’t seem to want to be twisted, but I twisted it as best I could and it looked beautiful and tasted like heaven. The recipe calls for baking it about 55 minutes, lowering the oven, and baking it longer. Mine, however, were completely done after 55 minutes. (I always test for doneness with a thermometer — 190°F when it’s done.)

Well, one other problem. You just can’t stop eating it! (I froze one of the babkas and obviously it wasn’t as good as fresh out of the oven, but it was still excellent. It was absolutely “inhaled” by my guests.)

Holy babka! This was amazing! I cut the recipe by 1/3 as I did not want 3 of these things hanging around, as I would have eaten them all. The recipe worked perfectly with the reduced quantities.

Though the recipe did take some time, it was absolutely worth it, resulting in a rich, chocolatey treat. Plus, if you prepare it the night before, refrigerate it, and proof it the following morning, the process is less onerous.

My favorite part, though, was the streusel topping. Not only did it add a perfect textural contrast, but the addition of confectioner’s sugar (with its cornstarch) kept the topping light and crisp. Perfect recipe for breakfast during the holidays!

Wow! This bread was worth all of the steps! I don’t think I’ve ever had chocolate babka before, so I don’t know what to compare this to. How about decadent chocolate baked into a crusty bread with a soft center? How about the house smelled incredible? How about it’s fun to make? How about 3 full loaves yielded from one dough recipe? I’m excited to say that this turned out so delicious! It really was fun to make. The dough was beautiful; so velvety and so easy to work with.

Each step is explained thoroughly enough, except I had a bit of trouble shaping the first loaf. Once I got to the second and third loaves, their shapes were more consistent, and more of what it was supposed to be like. Although the shape of my first babka wasn’t probably exactly as written, once baked, you can’t even notice.

I was turned off when I read of the two and a half tablespoons of cinnamon in the chocolate filling; but this was perfect! I don’t usually prefer cinnamon with chocolate, but it’s only slightly noticeable and delicious. This loaf is chocolaty, it rose well in the oven, and with the streusel topping, it looks as if it came from the bakery. I did freeze the other 2 loaves (made them up to step eight) and will send them home with my Thanksgiving guests for their holiday weekend!

Do try this recipe. You will not be disappointed.

While this is an involved recipe, the end product is delicious.

Like any yeasted bread, the amount of flour may need to be adjusted (as well as timing on kneading). Pay attention to the baking time. Mine took a lot less time to get to the color prescribed. When I lowered the temp, I also covered the loaves with aluminum foil.

As I stood waiting on line at my favorite New York City store on Friday, I noticed how many people were buying chocolate babka…but I thought to myself…my guests are in for a real treat…my Saturday morning project was going to be trying out this chocolate babka. I figured that if it didn’t work out I could bake a batch of cookies really quickly and my guests would never know what they were missing.

As I started working with the dough and following the step-by-step directions, I had a feeling that it was going well. The dough was silken and rose beautifully. The assembly process went smoothly and the tons of chocolate filled the loaves to perfection. They looked great, they smelled great, and then when I tasted the babka, I knew it was perfection. My project gave me a perfect reward. My New Year’s brunch guests got a perfect dessert. I am thrilled to have 2 more loaves in the freezer, one fully baked and one ready to be brought to room temperature and then baked off.

Those people at the store should have gone home and baked just like I did…this cake can’t be beat. It is perfection.