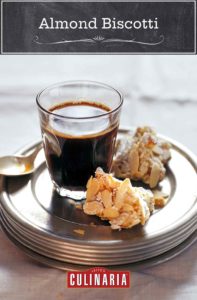 These almond biscotti have a different shape and texture than the traditional Italian cookie, but that classic flavor remains.

Rosa’s almond biscotti are displayed on our counter on Mondays and Saturdays. Those are the days Rosa, my sister, manages to squeeze cooking for the café into her busy week while raising Sophie and the twins, Francesca and Marcella, as well as feeding Michael and conducting her popular cooking classes. These biscotti make a lot of people happy, just like Rosa.–Guy Mirabella

What makes these biscotti different than most?

These bewitching biscotti may not turn out quite how you’re expecting. Different shape. Far less fuss. But with all that classic biscotti flavor and function. Also, the brilliant baking force behind this fine creation, Rosa, was generous enough to chime in below in the comments with a few insights into some of her variants on the recipe; don’t miss this cooking lesson! 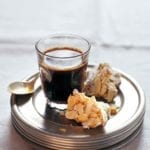 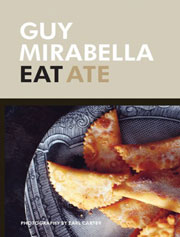 My tasters all said that this biscotti was absolutely delicious and looked like it came from a bakery. To me that seems like a pretty good endorsement! The final product was slightly chewy and crunchy on the outside and not too sweet. The shape was a bit unusual, but I’m not sure I properly made a pyramid shape. I was able to make about 30 cookies.

These are the easiest cookies to make, and they look far more sophisticated than what you would expect to get for so little effort. I was a little concerned about making these instead of my classic biscotti, but they truly did not disappoint. In spite of their goodness, they are quite different from traditional biscotti. The use of almond flour and egg whites make their texture and taste more like almond macaroons or even Italian pignoli cookies without the pine nuts.

A level one-tablespoon ice-cream scoop yields the perfect size for this cookie. I used a combination of blanched and sliced almonds, and when they were dusted with confectioners sugar, they sort of looked like little pine cones.

Also, these cookies are only baked once, so calling them “biscotti” is a bit of a misnomer. Perhaps they would be more aptly named “Better than Biscotti” cookies!

Unlike the typical sturdy bars, these almond biscotti have a very delicate texture, a surprise I enjoyed very much. They are fantastic with coffee or espresso (dunkers, go right ahead); the almond flavor is lovely with the aroma of the orange zest.

Almond meal is expensive—over $10 for a small bag—making these precious little morsels even more special. When ready to form the biscotti, wet your fingers with water to keep the dough from sticking to your hands.

I really liked the flavor of these cookies. They had a slight crust on the outside and a nice softness in the center. The cookies were hard to shape and lost their shape a bit in the oven. And I needed a little more baking time for the cookies than the recipe indicates. I used sliced almonds and crushed them to get smaller pieces of almond all over the biscotti. Other people might like the texture of sliced almonds but I like this a bit better.

So simple, delicious, and chewy with a little bit of crunch from the almonds the cookies are rolled in. I love the orange zest in these. I might put just a pinch of salt in the next time I make them. Great for a last-minute treat.

While not really a traditional biscotti recipe, this recipe results in a deeply almond-flavored hard cookie that reminds me of a macaroon without the coconut. While I had to go to a few stores to find the almond meal, I had the rest of the ingredients for this easy and quick recipe already on hand.

The recipe worked well with a fine almond meal (e.g., Bob’s Red Mill) but I’d like to try it again with a less fine almond meal (e.g., Trader Joe’s). The biscotti mixture was too sticky to easily roll into a ball. I kept the mixture cold and used a little a water on my palms to help me roll the mixture into a ball. It made a huge difference. I also found that I needed more baking time to get the centers to bake. I flattened the last round of biscotti instead of making them into pyramid shapes, and that helped ensure that the centers were baked through.

While not the most attractive biscotti or cookie, this recipe showcases the almond-orange flavors well and I’ll make them again.

I’m feeling guilty because I whipped up these almond biscotti; they’re a rather healthy treat, however, I just ate several of them. I can’t stop; they’re that good!

When I first saw this recipe, I was unsure of the orange and almond combination. But, wow, the flavors really highlight each other and meld perfectly. The dough came together in minutes. I ran my granulated sugar through the processor as I didn’t have superfine sugar, and this worked well. I thought I’d have trouble finding almond meal at the grocery store, but I did not. It was expensive, but I’ll gladly make these cookies again soon.

I wouldn’t say mine were a pyramid shape, but they tasted great. Some did fall over during baking, so I will be sure to form a better “base” on my “pyramids” next time I make these. I don’t think they need the sprinkling of confectioners’ sugar at the end, or perhaps it’s just to make them more pretty? In my experience, biscotti are very hard when bitten into. These are not the texture of a typical biscotti; they have a crisp outer part with a rather grainy/somewhat soft interior. These are much more pleasant!

These are a great cookie for this time of year when we are all trying to cut back a little; however, there’s no stopping at just one!

I tried this recipe mainly because it would use the almond flour I had tucked in the back of my fridge, but I was really happy with how well it worked out. My freshly opened bag of sliced almonds, with an expiration date more than a year away, turned out to be rancid. I improvised by tossing some raw almonds into my food processor and pulsing them a few times.

When I make this recipe again, I will repeat this, as the crunch and variety of texture in the almond bits was great, and I don’t think I’d enjoy it as much with sliced or slivered almonds. Back to the recipe itself and baking: I took them out of the oven when the biscotti were just starting to achieve that light golden color called for. They were achingly tender and stayed that way for a week in a sealed container. Generally, a batch of baked goods staying around that long would not be a vote of confidence.

In this case, it was, as I decided to savor every bite of biscotti throughout the Christmas baking season, along with tastes of my favorite cookie recipe–also one that keeps very well–Jennifer Lindner McGlinn’s Chocolate-Ginger Crinkle Cookies.