This beer roasted chicken draws its unique flavor from European-style beer, orange zest, and coriander. And it’s a one-pot meal, which makes it a cinch to both toss together, forget about while it’s in the oven, and not to mention clean up afterward.

This roast chicken takes its flavors from one of the classic European beers: Belgian witbier. This style, which often uses orange peel and coriander seeds in the beer-making process, leads to unexpectedly wonderful flavors in the final brew—flavors that also happen to pair well with roast chicken.–Ian Knauer

What’s the best beer to use in this beer roasted chicken?

As noted above, this recipe was designed to use not just any old can of PBR but rather a European-style beer with subtle nuances. The brands we find to be fairly readily available include Blue Moon, Hefeweizen, and Shock Top. If those aren’t to be found in your local stores, you can opt for a lighter-style ale, such as a summer ale or even a slightly more robust Belgian farmhouse ale. You want something that has some complexity to it but isn’t overwhelmingly heavy or dark, as the beer is the foundation for the flavor of your pan sauce. 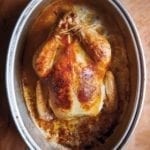 This beer roasted chicken draws its unique flavor from European-style beer, orange zest, and coriander. And it’s a one-pot meal, which makes it a cinch to both toss together, forget about while it’s in the oven, and not to mention clean up afterward.
Ian Knauer
Prep 15 mins
Cook 1 hr 15 mins
Total 1 hr 30 mins
Mains
American
4 servings
381 kcal
5 / 2 votes
Print Recipe 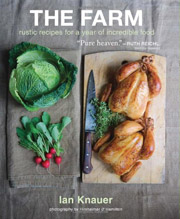 This is a crazy-good roast chicken that, as an added bonus, is a cinch to make. We feasted on this crisp, juicy chicken. It was divine.

I used Sam Adams Summer Ale as my wheat beer of choice. To roast my chicken, I placed it in a 12-inch cast-iron skillet and poured the beer over it, straight from the bottle, while it was cooking. After exactly 50 minutes, I pulled the golden brown chicken from the oven (checking the internal temperature with a digital thermometer to make sure it was done, which it was), transferred it to a cutting board, and got to work on the gravy. Instead of adding the cornstarch slurry, I finished the sauce with a tablespoon of butter and some salt and pepper.

This makes a lovely roasted chicken, a posh version of beer-can chicken. I used Shock Top Belgian White. The flavor of the beer was subtle in the chicken and on the skin, but more pronounced in the pan sauce. The chicken was moist and flavorful. My diners were asking for more crisped skin. The cornstarch slurry stirred into the pan juices went nicely with the roasted potatoes I made. A very nice roasted chicken that I’d make again.

This recipe will definitely be in my circulation of awesome roasted chicken recipes, as I roast a chicken every few weeks. It was fun to try something new. And although I’m not certain I could detect the wheat beer flavor—the orange seemed to be more highlighted—the flavors were perfect together. The chicken was full of moist, citrus goodness.

To make the flavored butter, I got down and dirty, as I felt that combining the ingredients in my hands worked best (think of mixing meat loaf by hand). I’d recommend using a small roasting pan, one that’s close in size to the chicken. I used a larger pan and some of the drippings got rather dark. I don’t think the slurry was needed nor was the gravy needed at all, really. The chicken had an incredible juiciness all on its own!

This chicken recipe is a keeper. It cooked up nicely in the 50-minute time frame. It was moist and juicy with a crisp, seasoned skin that tasted fantastic. The beer “gravy” was easy to prepare and came together in a snap.

I needed to use 2 teaspoons of cornstarch to 1 1/2 tablespoons of cold water to get the gravy to a consistency that would pour well without spreading like broth all over the plate. The flavor of the gravy was outstanding and tasted wonderful on our potatoes too. I used a hefeweizen, which worked very well. This is an easy way to roast a chicken with a unique twist on the gravy.

I used a Belgian farmhouse ale for this recipe. This is a beer that often incorporates wheat and spices such as orange zest, coriander, and ginger, so I felt it would pair quite well with the chicken. And it surely did! The compound butter under the chicken skin and the garlic and orange in the cavity imparted a wonderful, rich orange flavor to the chicken and the gravy as well. The little bit of slurry added to the roasting liquids gave it just the right amount of substance to coat the meat on the serving platter. I’ll definitely be making this recipe again and again.

The wheat beer reduction gives this moist roasted chicken an unexpected savory quality. A cast-iron skillet was the perfect “flameproof” roasting pan for this recipe. I opted not to add the cornstarch and just reduced the sauce to my preference.

The directions for this chicken were very straightforward. The finished product was a crisp-skinned, mahogany-colored, moist, delicious chicken. I liked the fact that specific beers were recommended for folks who may not know beers well enough to pick an appropriate one. We used one of the suggested beers, Blue Moon. Initially I was a tad concerned with the 450°F oven. With that high a temperature, we’ve set off the smoke detector when roasting chickens many times in the past. Perhaps it was the combination of the beer and a fairly lean, organic, air-dried chicken, but we had no problem with smoke at all, and no need to pull a chair over to where the smoke detector is.

One thing that bothers me with many roasted chicken recipes is that they rarely tell you how to put the chicken in the pan. Personally, we like to first put the chicken in breast-side down, and then we turn it breast-side up, usually halfway through the cooking process, which is what we did in this case. However, there are a lot of folks out there who may not know “which end is up,” so to speak, and would like to know which end should be where.

There was no need to add the cornstarch slurry. The pan juices resulting from adding the rest of the beer to the browned bits in the pan were wonderfully flavorful and a beautiful color that made our plates very enticing. It was a feast for the eyes, as well as one for the stomach.

Really good recipe. The chicken meat was moist and tender and tasty, including the breast. The skin was crisp and delicious. And the directions were easy to read and understand and quite accurate.

Roasting chicken at 450°F is my preferred method, since it creates a great crisp skin and moist meat. I loved the Blue Moon beer baste, and it left some great fond (the stuff left on the bottom of the pan), which made a terrific sauce. I added the juice from the 1/2 orange leftover from what goes in the cavity to the beer that I basted with and it was really tasty. I didn’t need the cornstarch and water; the sauce was just fine without it. If you had a lot of beer left and added it afterward to the pan when the chicken was done, perhaps you’d need the slurry to thicken things, but I didn’t find it necessary.

Will definitely make this again. Oh! And if you bought more than 1 bottle of beer and have any left, the beer itself is delicious nice and cold with a slice of orange in it.

This recipe produces a wonderfully moist and flavorful chicken. The pan gravy is also quite tasty. The only downside is that this also produces a fair amount of smoke from the hot oven, even with the basting. Plan ahead for good ventilation when making this.

The basting used up most of the cup of beer—I used a hefeweizen—so I added a little more to make the gravy. This recipe is definitely a keeper. I don’t know if the slurry is absolutely necessary, but I liked the way it came out, so I wouldn’t change it. I grew up eating gravy thickened with cornstarch this way, and it just seems right to me.

I found this to be a fun recipe. My chicken was about 4 1/2 pounds. Because of the size difference, I had to cook it for an extra 20 minutes. I used Blue Moon and it gave off a great flavor, although I think any wheat beer or even Leinenkugel Honey Weiss would be great.

I basted the chicken with a 1/4 cup of beer every 15 to 20 minutes. There wasn’t any beer left, but the gravy was okay without it. Depending on how thick you like your sauce, I’d suggest doubling the cornstarch.