This North Carolina clam chowder has a light broth that lets the clamminess of the soup come through. It comes together easily with fresh, frozen, or canned clams along with bacon drippings, potatoes, and clam juice. Here’s how to make it at home.

No, not Maine clam chowder. North Carolina clam chowder. All along our Outer Banks and southern Outer Banks is home to this style of chowder. Somewhat akin to the chowders of Rhode Island, this style is more about the clams than the thick, cream-based chowders of New England. “It’s a type of chowder,” says Fred Thompson, a cookbook author, resident of Raleigh, North Carolina, and publisher of Edible Piedmont, “that you’ll find at a local’s home.”–The Lodge Company

How do I make sure my clam chowder is as good as possible?

The folks at The Lodge Company—you know, that place that does cast-iron cookery of all sorts—came up with a list of essentials when it comes to how to make darn good North Carolina Clam Chowder. Here’s what they have to say on the topic:

1. The key to a good chowder is timing. Wait until the potatoes are fork-tender before adding the clams in the shell, because they don’t take long to cook.

2. Be careful not to overcook the clams. They will be completely cooked when their shells open wide (about 10 minutes). Discard any shells that remain closed.

3.To thicken this chowder like the locals do, place a slice of white bread in the bottom of each serving bowl before ladling the chowder into the bowl. 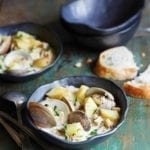 This North Carolina clam chowder has a light broth that lets the clamminess of the soup come through. It comes together easily with fresh, frozen, or canned clams along with bacon drippings, potatoes, and clam juice. Here’s how to make it at home.
Prep 30 mins
Cook 1 hr 30 mins
Total 2 hrs
Mains
New England
8 servings
160 kcal
5 / 2 votes
Print Recipe 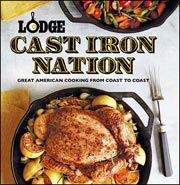 Wow, was this recipe for North Carolina clam chowder a beautiful change of pace from the heavy clam chowder that I’ve been accustomed to all these years. If you like clams, you’re going to love this chowder. It definitely makes you feel like you’re eating fresh clam chowder along the Outer Banks of North Carolina. Its flavors are rustic and comforting and even a bit elegant with the addition of the clams in the shell and the cream. The chowder is chucked full of tender clams—lots of clams in every spoonful—and the broth is very flavorful.

I followed the recipe ingredients and directions pretty much as written. It’s pretty straightforward. My 1/4 pound salt pork rendered about 2 teaspoons, which was just perfect. Any more would have been too much grease. I used 1 bottle (which was 1 cup) clam juice along with 3 cups water. I used 1 1/2 pounds frozen chopped clams that I bought from my local fishmonger. They were relatively inexpensive at just $6 a pound and were very good. I added 2 cups heavy cream to thicken the broth just a bit. This was the perfect lunch on a cold and rainy day. 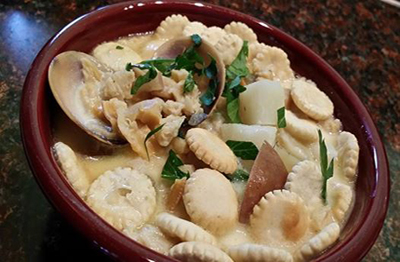 This is a delicious North Carolina clam chowder, or rather, broth-based soup. I found the soup to be incredibly light, and I think it’s a winner not only in my home, but at any potluck and at any time of the year.

I used canned chopped clams in liquid. I used 4 cups chopped clams and all of the liquid they came in, which was about 2 1/4 cups. I added 2 cups water plus 2 cups clam juice and at the end I had the most flavorful, light, dairy-free clam chowder. Please taste the broth before adding the salt, as there is salt in the broth that the clams come in. Add the fresh clams as soon as your potatoes are fork-tender and this way you won’t overcook the clams. You don’t have to add milk or cream, which is a surprise, as the flavor is there without either one.

I served the soup with a slice of fresh bread in the bowl, as suggested, and a sprinkle of chopped parsley. I think one could add fresh thyme and fresh veggies, too. It’s well worth the effort.

This North Carolina clam chowder was so good. It’s more like a stew than a chowder because there are so many clams in it. I loved the overabundance of clams because I love clams.

I used 2 tablespoons bacon drippings, as I always have bacon drippings because I save them anytime I cook bacon. (Someone who wants to make this recipe healthier could substitute olive oil or some other oil to sauté the onions.) I emptied the clam juice from the container of clams into the measuring cup, and I used clam juice and water to make up the remaining liquid. My significant other, who grew up in New England, would have liked more liquid. I cooked the potatoes for 10 minutes and then added the clams for another 10 minutes. This worked perfectly.

I couldn’t find those little oyster crackers at the store, and we didn’t have any bread. However, I did find some little mini melba toasts in the cheese section of our grocery store, and we floated some of those crackers in our soup. They were perfect.

I really enjoyed the flavor of the clams accentuated by the salt pork in this North Carolina clam chowder. I added the bread but not the cream. It worked well, and I think the recipe could easily be adapted for mussels or oysters. The recipe is similar to a French seafood dish called à la nage, but the French don’t add potatoes.

I’ve made a recipe for Boston Fish Chowder that’s quite similar, but in the Boston recipe, I used a blend of clam juice and fish stock, and heavy cream is added.