These homemade thin mints are copycat Girl Scout cookies made with everyday ingredients. Like the original, they’re thin peppermint cookies coated in a shiny chocolate glaze and taste just like your beloved Girl Scout faves. Includes gluten-free as well as dairy-free options.

No more waiting and waiting and waiting each year for that magical moment when your boxes of Girl Scout Cookies FINALLY arrive. No more trying and trying and trying the rest of the year to resist the lure of those boxes you attempted to hide from yourself to make them last. No more praying and praying and praying you’ll forget the craving because you depleted your secret stash of Thin Mints and there are still months to go before they’re once again available. No more wishing for a homemade Thin Mints recipe, because here it is. Whew.–Renee Schettler Rossi 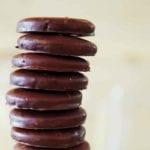 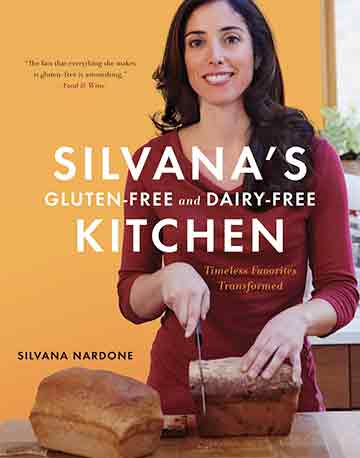 Coat the homemade Thin Mints with the chocolate glaze

This take on the famous Thin Mints cookie brought to you annually from the Girl Scouts is, in a word, UNBELIEVABLE. The flavor and texture are incredible.

I found the finished dough to be soft but not at all sticky. Having little room in my refrigerator to rest rolled sheets of dough, I chose to roll the dough into a log about 2 inches in diameter. It worked perfectly. I then wrapped the dough tightly in plastic wrap and refrigerated it overnight. When it was time to bake the cookies, I simply sliced them a bit under 1/4 inch thick.

I couldn’t find chocolate coating, so in its stead, I melted 14 ounces semisweet chocolate with 1 tablespoon vegetable shortening. It worked very well, hardened nicely, and had a beautiful sheen. Now that I have this MAGNIFICENT homemade Thin Mints recipe in my arsenal, I shall easily be elevated to a cookie baking god. Although trust me, there is enough room in the cookie kingdom for everyone!

This homemade Thin Mints recipe really does replicate the taste of the iconic Girl Scouts Thin Mints. These are a bit chewier and moister, which I think is normal given that they’re homemade and have fewer preservatives than “the real thing.” The mint flavor and the texture were delightful, and the chocolate coating really made them feel like Thin Mints. These were a real pleasure to make.

This recipe is quite easy to follow and mostly true to the directions. A few things to note, however. First, I used regular white flour, not gluten-free. Second, the sugar and shortening mixture never got “fluffy” for me like it does with butter and sugar. Also, the dough was VERY sticky. I had to use a healthy coating of confectioners’ sugar on the rolling pin and tabletop to be able to roll the dough out.

I refrigerated the cookie dough overnight. When I took it out in the morning, the dough cracked easily. It’s worth noting that the first batch I made I did not coat in chocolate, but rather put a layer on top, and the full cookie coating in my second batch made a huge difference in the flavor and similarity to real Thin Mints.

Every now and then, a recipe comes along that really grabs my imagination. The kind of recipe that, as soon as I make it, or even before I’m finished making it, has me thinking about 50 different variations, and wanting to get right back into the kitchen to start trying them out. This homemade Thin Mints recipe was like that.

I also used butter instead of shortening, since having the cookies be dairy-free wasn’t important to me and I don’t keep shortening in the house. The cookie dough was very sticky—far too sticky to roll out. I started out using confectioner’s sugar to roll out the dough, but it became clear that I would have to use so much sugar it would change the flavor of the dough, so I switched to the flour blend. And instead of rolling it out to 1/8 inch from the start, I got it into a disk, and put it in the freezer for about 15 minutes, after which it was much easier to roll. After rolling and cutting out the cookies, the 2 baking sheets went back into the freezer for another 15 minutes or so before baking. This was sufficient to keep them firm and they held their shape nicely during baking.

I used Ghirardelli coating chocolate disks and found that 12 ounces was plenty to coat the whole batch of cookies with some chocolate left over. What to do with the leftover chocolate? Pour it on a piece of parchment, and sprinkle on some nuts, dried fruit, or coconut flakes, and let it harden into bark. Cook’s treat!

The cookies came out beautifully. I do think that I would increase the mint extract in the future, as once the cookies were coated with chocolate, the mint got overwhelmed. I’d also love to try other variations of this. For example, I think these would be great made with some orange extract and zest instead of mint. Or one could skip the cocoa powder, add some more flour, and flavor the cookies with lemon and coat them with white chocolate. The recipe seems to be pretty forgiving, and there are lots of possibilities to explore.

This homemade Thin Mints recipe was a true hit in our household. The cookies are very comparable to the Thin Mints we are all used to, but in my mind, they’re even better as they’re not as sweet and use darker chocolate.

This is a very easy recipe to follow. The only problem I had was creating a disk out of the dough, so I decided to refrigerate it for about 20 minutes, and I was then able to create the disk, as prior to that it was too sticky. After the dough was rolled out, the first batch stayed in the fridge for about 2 hours. The second stayed overnight. The baked cookies came out hard enough not to break apart when dipping in the chocolate.

In terms of the melted chocolate, the temperatures worked beautifully. The hardest part was dipping. I guess it’s a matter of experience, as my fingers were filled with melted chocolate! One thought I had for those who prefer less dark chocolate taste would be to use sweet chocolate for the melting portion of the recipe.

This recipe will absolutely be a favorite for us here at home, but also as Christmas gifts, for parties, etc. For the last batch, I decided to melt semisweet and sweet chocolate to use on the cookies. My older daughter’s comments were:” WOW… how did you do this? They’re a cross between Thin Mints and Milano cookies. I LOVE them!”