This poutine, made with French fries smothered in cheese curds and gravy, is a Canadian classic. Here’s how to make it at home.

Thankfully for those of us needing to satiate our craving for the obscenely indulgent Canadian classic known as poutine, it’s no longer something that mandates a pilgrimage. Perfectly crisp fries, rich gravy, and tender cheese curds all dogpile in a gloriously messy plate of what we consider bliss.–Renee Schettler Rossi 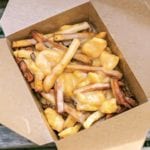 This poutine, made with French fries smothered in cheese curds and gravy, is a Canadian classic. Here’s how to make it at home.
Prep 45 mins
Cook 30 mins
Total 1 hr 45 mins
Mains
American
6 servings
775 kcal
5 from 1 vote
Print Recipe 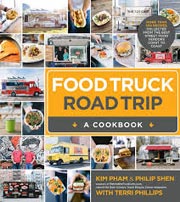 For the gravy (or substitute your fave gravy)

What You Need To Know About How To Pronounce “Poutine”

Thankfully for those of us stateside seeking to satiate a craving for obscenely indulgent poutine, it’s no longer a relatively little-known Canadian delicacy. During the last couple decades, poutine has increasingly earned a place on menus everywhere, whether embraced as homey pub grub or elevated as fancy-pants haute cuisine. The only trick? Knowing how to order it—which essentially means knowing how to pronounce it. If you’re in western Canada, anyplace south of the border, or, actually, just about anyplace other than where they speak that tricky Quebecois, “poo TEEN” will do quite nicely. If you’re in Quebec, forget it—that lingo is just too nuanced for any of us to hope to master without proper instruction. Just point at the word on the menu and smile. [Editor’s Note: The kind and lovely Pina of One Two Culinary Stew just wrote us to say, “I’m originally from Montreal and I’d say the closest Quebecois pronunciation would be ‘poo-TSIN.’” Bless her.]

Who knew a French fry could be improved? The French fries alone are worth the time it takes to make this poutine recipe. This recipe for preparing French fries is the best I’ve ever tried.

The steps to putting this dish together are simple; they just take a bit of time. The results are well worth it.

I allowed the potato slices to rest in water for 30 minutes. I expected them to take a couple of hours to dry; however, they were ready to go about half an hour after I removed them from the water. The recipe for frying works exactly as written. It took 6 minutes for my fries to cook and become translucent. I did this step in 4 batches to keep the potatoes in a single layer. The second frying was done in 3 batches. After the second time I fried the potatoes, I could’ve stopped there and eaten every fry myself. However, there was gravy to make.

The good news about this gravy is it only takes 10 minutes from the first step of melting the butter until it’s complete and ready to pour over the fries and cheese. I used beef stock in my gravy and curds that I purchased from my local farmers market.

Since I’m not going to make it to Canada anytime soon, I’m thrilled to have this recipe to indulge my inner imaginary traveler. This recipe is worth every ounce of effort and time it takes to prepare. I used a combination of russet and Yukon Gold potatoes. I’m sure some people would frown upon this, but there was no issue with separate cooking times, and both kinds of potatoes were wonderful in this dish. This recipe makes a good amount of gravy. I didn’t use it all. I guess I’ll have to make another batch of fries to use the leftovers. 3 cups curds is a lot, so you can choose to use less depending on your preferences.

In the future when I make fries, I will use this recipe, regardless of whether I am making poutine or not.

Poutine! I’ll admit that for most of my life, this dish has held no interest for me. Why would I want to glop up my fries with cheese curds and gravy? An opinion based on complete ignorance, mind you. Then I took up cheesemaking as a hobby and was exposed to the delicate deliciousness of curds at all stages of a recipe between milk and aged cheese. Sometimes the curds barely make it to the cheese press—I want to gobble them up fresh and warm. Suddenly poutine started sounding a lot more interesting to me. And then this poutine recipe showed up, and I had my excuse. And you know what? I have seen the light. Poutine is good eating. I like it so much that I made it 2 days in a row!

Your poutine recipe will not be any better than your fries are, and you can follow the method given in this recipe for a two-stage fry and get excellent results. This method works great for restaurants, because they can do the first fry early in the day, and then hold the fries and do the second fry just before serving. But for a home cook, it’s a bit of a pain in the…well, you know. And there is an easier way that yields results that are every bit as good if not better. That would be the cold oil start. Just cut your potatoes into batons, no soaking needed. I use Kennebecs when I can get them from a local grower and Yukon Golds when I can’t. Both work beautifully. Dump the potatoes into a pot and pour in just enough oil to barely cover—it’s okay if a few tips stick out. Turn on the heat to medium high, and go off and do something else. Allow up to 40 minutes for your fries to get done. Stir them gently once at some point in the middle of cooking—not too soon or they will break apart. When they look done, pull them out with a skimmer and drain on paper towels or a paper bag. Sprinkle with salt and there you are—perfect fries.

This is a super-simple gravy, but it is good. I used a vegetarian stock—a vegetable and mushroom combo. I had to make the gravy gluten-free so I used sweet rice flour for the roux—it works perfectly in a one-to-one substitution for wheat flour in roux. Next time, I’ll probably use turkey stock as I think that would be ideal for this purpose.

The trickiest part of this whole recipe, to me, is getting the 3 components together at the right temperature with perfect timing. The poutine can go cold fast, so each component of the recipe has to be ready. The curds will hold over warm water, so that’s not a problem. Some people use cold curds and like the temperature contrast, but that brings down the temperature of the whole dish too much for me. I want the curds warm but not so hot that they melt. The fries need to be hot out of the oil, and the gravy needs to be hot—it cools quickly, which isn’t what you want.

Now, for those of you in Canada or the northern reaches of the U.S., you may be able to just go buy your cheese curds and you’re all set. But I live far south of the poutine belt, and fresh cheese curds are not readily available. If I wanted poutine, I would have to make them myself. I know that poutine is normally made with Cheddar curds, so I looked at some Cheddar recipes, and then I looked at more recipes just for curds for poutine. What I found was that they varied wildly—some used a mesophilic culture, some a thermophilic, for example. After giving it some thought, I realized it didn’t matter. Having made a number of different cheeses in a variety of styles, I can let you in on a secret: In the early stages, the curds all taste the same. It is only with time that the characteristics of the culture come through, and these curds aren’t going to be around that long. In fact, I think you can make a good argument that you don’t need a culture at all in this situation.

So if you want to make yourself some cheese curds, you’ll need some milk, a culture if you want it, and some rennet. If you’re using pasteurized milk, which I was not, you may also need some calcium chloride in order for the curds to set up. One gallon milk should give you about the right amount of curds for this recipe. Heat the milk to anywhere in the 90 to 95°F range. If you need it add the calcium chloride (30% solution) at about 1/4 teaspoon per gallon of milk. Add the culture, if you’re using one, and hold the milk in the 90 to 95°F range for an hour. Or just skip that step and go straight to adding rennet, either vegetable or calf, at 1/4 teaspoon (or 1/4 tablet) per gallon. Dissolve the rennet in a bit of water before adding it to the milk. Hold the milk at the same temperature for 30 to 40 minutes, then cut the curds into chunks with a knife. The texture will be like silken tofu. Gradually raise the temperature of the curds and whey over the next hour until they are at 116°F, stirring occasionally to keep the curds from matting together. The curds will shrink and firm up, and at 116°F, you will have the squeaky quality you want for poutine. Drain the curds in a colander (save the whey!) and sprinkle with salt to taste. Set the colander over a pot of hot, but not boiling, water to keep warm while you finish making your fries and gravy. The curds will continue to firm up in the colander. If you make your own curds, as I did, that’s going to take a good 2 hours, 3 if you use a culture. So you’re looking at about 3 1/2 hours total time, most of it hands off, but I’m not sure I can divide it up, since you do have to keep an eye on everything the whole time.