These baked pumpkin donuts are gluten-free and can be topped with dark chocolate frosting or maple-bacon glaze. You’re welcome.

Adapted from Danielle Walker | Against All Grain | Victory Belt Publishing, 2013

These baked pumpkin donuts are reminiscent of the old-fashioned variety of cake donuts I used to love. Dense, satisfying, and rich, they also have two crunchy and sweet topping options—maple-bacon or dark chocolate. With each bite, you’ll taste all the flavors of fall: pumpkin, cinnamon, nutmeg, ginger, cardamom, and clove.–Danielle Walker

We know what you’re thinking. Something that’s GF and paleo and baked rather than fried really can’t be considered all that much of a splurge, right? Wrong. Tasting is believing. Just see what our testers had to say about these pumpkin spice little lovelies in their comments beneath the recipe. (Yes, we test all our recipes before we share them with you, dear reader. Go on. Just scroll down and see what they have to say. Just as a teaser, some of the comments we’ve heard include “I’ll be making and savoring these little treasures again!” and “I immediately ate 3. Just saying.”) 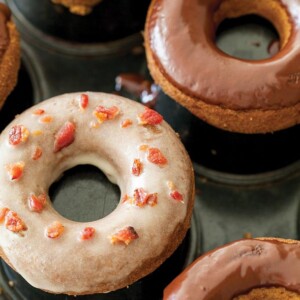 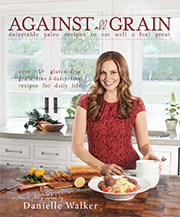 For the pumpkin donuts

For the dark chocolate frosting (optional)

For the maple-bacon glaze (optional)

These baked pumpkin donuts hit the spot for GF people, paleo people, and donut lovers in general! The donuts were dense but very moist. They had a nutty, sweet, spicy flavor. I used a couple 6-cavity donut pans and the donuts were puffed and looked set at the end of 15 minutes. My kitchen smelled like fall while the donuts baked. The chocolate frosting was perfect with the flavor of the donuts. I’ll be making and savoring these little treasures again!

I’m not much of a sweet tooth and I’m definitely not living a gluten-free life, but I’m a sucker for the combination of pumpkin and chocolate and thought, what the hell? For me, the label of GF in regards to baking goods usually sets the expectation bar pretty low. Be prepared to be pleasantly surprised. Bring this treat to your next gathering this fall, and you’ll be an instant hit. These baked pumpkin donuts are wonderfully delicious and too easy to eat. I immediately ate 3. Just saying.

I’ve never baked donuts before, so I needed to acquire a donut pan. And the only one I could find locally was a 6-cavity pan. I would definitely recommend getting two or ordering a single 12-cavity pan as it would have certainly sped up the process. I followed the baked pumpkin donut recipe exactly save for substituting cashew meal for the almond flour because I had it in my pantry. While I have read that nut meals traditionally do not sub well for nut flours in baked goods, I found it to be a non-issue with this recipe. I also made the pumpkin pie spice mix from this website. Very simple. The spice flavor was very, very subtle, and I would’ve preferred a little more punch. This donuts recipe called for 2 teaspoons pumpkin spice but I would add at least 1 more teaspoon if not double the amount. I found the batter to be rather thick, and it was pretty tricky to only fill each cavity 2/3 as instructed. It’s also important to note that whatever texture you leave the batter, that is the shape it will bake. So if you are desiring both sides of your donuts to be relatively smooth, you will want to smooth each batter-filled cavity (with the back of a spoon?) prior to baking. The donuts were ready in 14 minutes. At this point, the house smelled wonderful.

The maple-bacon glaze recipe calls for palm shortening. I am a big fan of all Spectrum oils. They make a great vegetable shortening that is made only of pressed organic palm oil. Very clean. I opted to make only the chocolate frosting. I combined all the ingredients, and it came together very easily in the microwave in approximately 30 seconds. The glaze will harden once in the fridge, although it’s worth noting that by that point, your donut will be cold. There’s something to enjoying donuts at room temperature and messy. Also, you’ll need to double the frosting recipe if you want to top all 14 donuts. I was only able to dip 7. Fear not, as I happened to have chai spiced whipped cream in my fridge, and while I theorized that the cream would go well on a donut, I can now confirm, it’s fantastic!

I had to admit I was skeptical—this baked pumpkin donuts recipe seemed so on-trend and I was a bit worried that the result might be merely a DSO (donut-shaped object) that was leaden and gooey. Surprise! These baked pumpkin donuts not only turned out to be flavorful and easy, they also won over a room of health-conscious critics: my Friday morning workout folks, some of whom are very health-conscious, some of whom have wheat issues, and of course no one wants to be seen as being piggish at the gym.

I’ve never actually made donuts before, as I’ve been trying to tell myself for decades that I don’t like donuts, and usually this works (hough I do have a secret weakness for maple-glazed cake donuts that I try to deny). I bought a Wilton’s 12-cavity medium donut pan and made multiple batches. I used canned pumpkin purée from Trader Joe’s and a freshly mixed batch of the Pumpkin Spice Mix recipe from this site. (I might add a little cardamon next time since the spice blend doesn’t include that, although the spice level of these donuts as-is was well-received.) I used a food processor and relied on a brief pulse since I don’t have power levels. The batter is not so much pourable as spoonable, and since I made it in multiple passes, I decided to pipe in the second and third trays to make it more even (I just used a resealable plastic bag and cut the corner, nothing fancy, but easier to control the flow). I got 31 smallish donuts out of the batch, 3 bakes, and for the smaller size, I found it took about 12 minutes per batch, and they were nicely rounded and even, the sides just hinting at pulling away from the mold. The pan has a nonstick coating, and I greased it with palm shortening the first batch and didn’t really need to re-grease it, though by the third tray, it could have used a little more. The bottom half had a nice golden brown color, a little darker than the top. Overall they had a light, almost sponge cake-like consistency. They came out of the pan easily when gently nudged with a skewer. I let them cool completely and then left them uncovered overnight because I did not want them to get moist or soggy. That was definitely the right thing to do. I made the glaze fresh in the morning. We tasted a couple donuts plain, unglazed, and they had a nice, light texture, not gooey at all, though not particularly dense. My super sensitive other half is particularly sensitive to the presence of baking soda and thought it was noticeable. I didn’t taste it, but maybe it could be reduced slightly. Once the donuts were glazed, that wasn’t a factor as the other flavors really popped with the glaze. I made the chocolate glaze, and the method worked beautifully. I’ve never tried dipping donuts (or cupcakes for that matter) in glaze to achieve a smooth top. Actually, mine had a tiny bit of texture and crunch because I was using a posh chocolate that had bits of pear and almond, which I thought complemented the pumpkin spice flavor very well. I bet you could choose a chocolate that had some ancho chile or bacon in it and get similarly delightful results. I took most of these to my morning workout, and they were met with oohs and aahs, and a friend who’s sensitive to wheat loved them, too. I assured everyone that these small donuts were more virtuous than your everyday donut, and I think if I ran the numbers, it would be true. I stored the remaining ones (both glazed and unglazed) in the fridge on day two so the glaze would remain set). Now I’m considering what else I can bake in a pan designed for DSOs (donut-shaped objects)!