We show you how to make ham with red eye gravy, that fabled Southern classic made with pan drippings, coffee, brown sugar, and a couple other everyday pantry staples.

Red eye gravy. It’s a Southern classic that’s frugally made from pan drippings and coffee. Though it’s traditionally served with country ham, any ham steak will work admirably, as long as it has sufficient fat around the edges to create drippings. Keep things classic and reach for your trusted cast-iron skillet when you make this.–David Leite

What Is country ham?

Country ham, popular in the deep South, results from dry-curing and smoking ham. The technique relies heavily on salt and, as such, what results has a lingering saltiness that’s quite intense. Country ham is less common today than in the past but is still available. It’s typically either used in ham with red eye gravy as here or thinly sliced and sandwiched in biscuits. 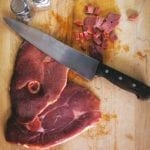 Red eye gravy is an old family favorite that I’ve eaten all my life. This recipe is almost the very same as the one that my grandmother made. YUMMMMMM!

The ham steak didn’t produce a lot of drippings, but I added the flour anyway and stirred. Once the coffee was added, it mixed nicely and thickened within a few minutes. Then I added the butter, pepper, and hot sauce. I didn’t add salt since the ham steaks were already sufficiently salty. I’m not familiar with adding brown sugar, but I did anyway to stick with the recipe. I served this for breakfast with biscuits and eggs.

This red eye gravy recipe gets a hearty bravo from me for its awesome rustic flavor.

I find that country ham is far too salty for my aging and sensible palate but this gravy is so tasty that I found it difficult to not sneak it right from the gravy boat! The star here is the wonderful red eye gravy. I promise I’ll forgo the country ham but will certainly whip up this red eye gravy with a simple ham steak or even biscuits and sausage. You will need nearly a tablespoon of all-purpose flour to thicken a whole cup of coffee.

Ham with red eye gravy is completely new to this California girl—and something I enjoyed playing with. I can see why the name must conjure road trips and traditions. I’d heartily recommend it.

My first attempt at this, we purchased a so-called country ham slice, packaged as a single piece, and very solid looking. It did not yield any significant drippings, so in a panic, I grabbed the closest fat on hand and frantically made a gravy approximating the missing drippings. Surprisingly the coffee laden gravy had just the right balance of sweet and hot with the dash of Cholula hot sauce and the brown sugar. We served with pan-roasted potatoes for dinner.

I decided I needed to seek out a fattier, maybe more traditional piece of country ham, so I bought a piece just over 8 ounces from a local charcuterie. This didn’t have a bone (either) but was a bit thicker and had some visible fat around the edges, so I knew I could get more fat in the pan. I actually pressed down on the fatty edge while cooking to ensure that, and when I added the flour, I quickly had a paste. The hot pan made adding the coffee a little more exciting—it bubbled quite high for a moment and then calmed as I added the other ingredients, and I ended up with a lovely silken sauce. This time I used Tabasco and maybe was a little generous, as there was more noticeable heat.

I served this version with a batch of quick-cooking white grits and passed the gravy on the side. I think seeking out a nice, fatty, traditional country ham steak is key to making this work, and the combination is a real treat. This served 2 very nicely.

If the coffee seems overpowering, I’ve seen several references to using a combination of broth and coffee. The idea that’s most interesting to me is trying this with a thin-cut smoked pork chop! I know there’d be more drippings, and I might reduce the amount of butter in that case, but for a country ham (or the kind I am likely to buy locally), this recipe works just fine. What a fun weekend breakfast or quick dinner, no hangover required.