This cacio e pepe kugel combines the flavors of Rome’s famous pasta dish with the comfort of a rich baked kugel. Cooked linguine is mixed with ricotta, mascarpone, Pecorino Romano, and plenty of black pepper and baked until crisp and golden.

This recipe takes the traditional Jewish noodle casserole known as kugel and smothers it with the rich, cheesy, peppery goodness of Roman cacio e pepe. It’s simple to make and comforting as heck.–Angie Zoobkoff 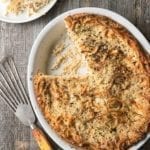 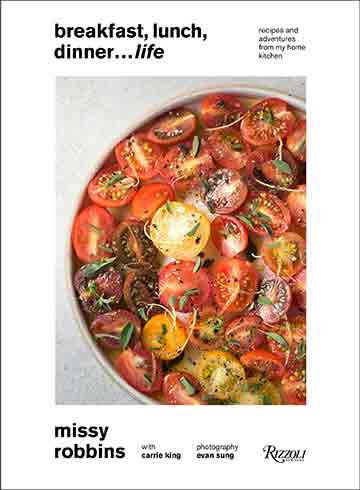 This twist on the classic cacio e pepe recipe is very quick and easy to put together, has a relatively fast bake time, and tastes delicious! I made this during the last (hopefully!) Nor’easter to rumble through New Jersey and we were all looking forward to a warm, filling, and yummy dinner. My husband and two teen sons described the dish as “delicious,” “rich without being too heavy,” “creamy and cheesy,” and “love the crunchy topping.” I definitely think this can be a “make-ahead” dish. I will keep this in my repertoire of recipes that I can prepare in the morning and bake at night.

This cacio e pepe kugel works well as a main course with just a salad or as a side dish with ham or chicken. It would also be a great pot-luck casserole as I think this would be a real crowd pleaser. I saved about 4 tablespoons of the pasta water and added it to the cheese and pasta when I tossed all together. I think it made a difference in the ease in which it all came together and made it a bit lighter and smoother. I used linguine and I think the recipe’s suggestion to use linguine, spaghetti or fettuccine is spot on as any other pasta shape would make this dish too heavy.

I dread the thought of cleaning baked-on cheese from my casserole dish so I lined the pan with aluminum foil and sprayed it. The dish came out perfect and my cleaning time was cut substantially! This makes A LOT but it reheated very well.

Taste memory can be an amazing thing. The aroma, the look of a dish, the taste, can all transport you to another place and time. This cacio e pepe kugel did just that for me. On one hand, it took me back to my youth. I don’t have a lot of memories of food from when I was growing up. My mother worked more than full time, which didn’t leave much time for cooking once she got home. However, one thing that I can remember, and I do remember fondly, is her kugel. I was a bit skeptical because the kugel I knew was made with egg noodles, but I was willing to give this recipe a chance. I’m so glad that I did. I used a favorite imported spaghetti. The end result tasted just like I remembered my mom’s kugel tasting. It was not heavy in any way, something that I had been concerned with, using spaghetti instead of egg noodles.

The second place that I was transported to with each bite of this kugel, and a place that I was hoping to revisit by making this, was Rome. Cacio e pepe is a traditional Roman dish, one which we were lucky enough to enjoy this past fall in the beautiful capital of Italy. If I closed my eyes, I could imagine us sitting in a trattoria, sipping a glass of house wine, and enjoying a bowl of cacao e pepe.

I divided all of the ingredients, and made half a recipe in a 9-by-9-inch Pyrex dish. It could have fed 6 people, especially with a refreshing salad on the side. I made a salad with Cara Cara oranges, thinly sliced red onions, arugula, and toasted pecans. It was a wonderful meal. One well worth repeating, especially when I want to revisit either place in time.

I’m not sure I’ve ever turned down kugel or cacao e pepe, so a cacio e pepe kugel is dangerous. Very dangerous. Needless to say I cut the recipe in half so I could exercise some self control. I just threw the whole thing in an 8-inch-square baking dish and baked.

Speaking of self control, I let it stand about 10 minutes before digging in. I got 4 very generous servings from half a batch. But I’m getting ahead of myself. This recipe is super easy. I whipped the ricotta for about a minute on the highest setting of my stand mixer using the wire whip attachment. If I was super lazy, I would have added the mascarpone, Pecorino, and pepper right to the mixer for a 30-second blitz, but stirring with a large spatula works just fine too. I added only half the salt since the Pecorino was plenty salty. For ease of mixing, make sure the pasta (I used fettuccine) is still rather warm. Use tongs to make sure every strand gets coated.

The finished product is super rich and cheesy and salty, which is just fine by me. The cheese does get a bit curdly looking and it doesn’t really cut into clean squares, but I think that was me. I may have baked it a bit long to get those crispy edges and a crunchy cheese topping. Don’t cut the amount of pepper. It’s not too much, especially if it’s freshly ground. Also, it reheats well if you take the chill off slowly. Oh and you can totally sell this to a preschooler as cheesy noodles.

This dish took my Jewish heritage and my enjoyment of Cacio e Pepe and combined them into a kugel-y sort of a dish that’s both flavorful and pleasing. Despite the 3+ pounds of cheese, dare I say it could use more?! My tasters and I agreed that, while it was certainly tasty, cheesier would be tastier! It took substantially longer than the stated 35 minutes of baking time to get to golden brown and crispy top and sides, and it was actually the bottom that browned to golden first. I removed it from the oven after 50 minutes. In addition to the comments about more cheese, please!, it was also important to pepper atop generously as pictured, or it did not seem peppery enough. Personally, I would have loved it served with almost any simply-prepared green vegetable or a salad, both for the color and for the texture or crunch. And in case you are on the kugel fence, one of my tasters, after having eaten their initial portion, refilled their plate, and said, “It kept staring at me so I had to eat it, and it’s delicious.” Enjoy!