Adapted from Diana Henry | How to Eat a Peach | Mitchell Beazley, 2018

A Mexican classic, tinga poblana, or, as it’s more commonly known, pork tinga, is a slowly simmered pork stew made with roasted tomatoes, chipotle chiles, chorizo, and onions. And it’s as complex, as robust, as rich, and as unbelievably satisfying as you’re imagining. Tuck it into tacos, smother some rice with it, or simply spoon it straight from the bowl.–Angie Zoobkoff 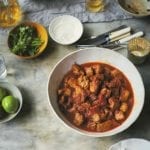 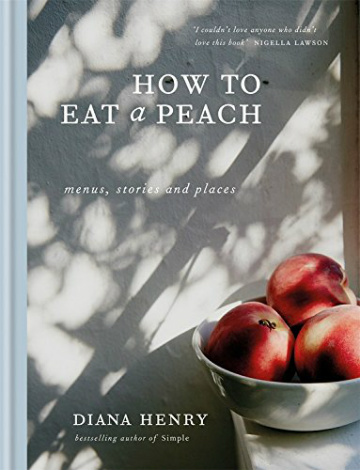 Tinga Poblana is one of my favorite Mexican recipes. I make it often but I always use chicken. I was really excited to see this pork tinga version and it didn’t disappoint.

Tinga Poblana is a fairly easy recipe that cooks slowly and yields a very flavorful and rich dish. I loved the addition of the roasted tomatoes as they added an additional layer to this dish. I will definitely make this again. Easy and so delicious.

This recipe made a lot. I would say enough for at least 15 tacos or 6 servings.

You know you have a winner of a recipe when your husband claims all leftovers for his lunches the rest of the week! This pork tinga is one of those dishes that tastes great for days because the flavors continue to meld in the fridge. And with all the accoutrements, this dish is over-the-top delicious. I have a feeling this will be a regular lunch request going forward.

My one tweak would be to suggest turning the oven up to 400° or even 425° when roasting the tomatoes. I roasted them for an hour and 20 minutes at 375°, but they still weren’t blackened and shrunken. I finally broiled them for 7 minutes.

My husband took his first bite and immediately asked if there would be enough for lunch the next day. The flavor of this dish is so authentic and the finished result unbelievably satisfying. Easily the best thing I’ve eaten all month.

Made some homemade naan on the grill for sopping up all the amazing sauce.

I’m expecting at the moment and I’ve been craving Mexican and Latin American food like crazy. This was an AMAZING weeknight dinner that hit every note. There’s a bit of prep, but once everything is browned, it all goes into the pot and simmers over the stove until it’s ready–the longer the better, too! My husband and I get home hours apart sometimes, and by the time he got to it, it had been bubbling away on the stove for about 4 hours and it had definitely gotten better by then.

Please, please make sure you serve it with avocado and sour cream. They provide such a nice creaminess and richness to cut the heat and acid of the dish. We had plenty left over, too, and it absolutely gets better with age.

There aren’t many recipes where I genuinely say that I wouldn’t change even one little thing, and this is one for sure! This will absolutely make you 6 very generous servings.

This was a Mexican dish like none other I’ve ever had or made. I knew this recipe would be a winner when the deep, rich aroma of roasting tomatoes filled the house. It just got better from there. The tender chunks of pork combined with the spiciness of the chorizo and the spicy-tart-sweet sauce from the tomatoes, chipotles, and onions made this recipe worth all the time. It’s definitely a keeper.

It wasn’t difficult, just time-consuming. One thing: Pork shoulder is a fatty cut. The trick is to be sure you don’t have chunks with too much fat.

I was unable to get dried chipotles, believe it or not, so I used chipotles in adobo. Not ideal but it worked.

The dish was even better the second day, after everything had a day to marinate.

We had it with cilantro, avocado, and chips.

This dish requires an investment of time but it will be time well-spent. It can be served plain with only the suggested condiments or with some simple steamed rice or more traditionally as a tostada or taco as you would chicken tinga.

The goat cheese might seem unusual as a garnish but the earthiness of the cheese works with the acidity of the tomatoes and spiciness of the chilies.

I’ll make anything that calls for pork shoulder, so I had to give this a go. This was a terrific tinga that will go into my regular rotation.

By the way, tinga means stew, and poblana means from Puebla (not the chile). It always includes tomatoes, chipotle chiles, thyme, and oregano and can be made with pork as well as chicken.

This tinga has great flavor due to the chiles and roasted tomatoes. I found this to be at a medium spice level, so if you’re worried about the chipotle chiles and don’t mind some spice, go for it!

This can be served as a meal in a bowl, with all the yummy garnishes suggested. But for me, it was begging to be folded into warm corn tortillas. I set out little bowls of cilantro, avocado, sour cream, red onion, and crumbled queso fresco and let people customize their tacos.

I didn’t want to babysit a pot on the stove so I put in into a 350° oven for the same amount of time. It worked beautifully and resulted in tender, juicy, morsels of pork.

I reversed the order called for to cook everything though. My reasoning was that the chorizo would make the pan unduly sticky with residue. So I started with the pork cubes first, then added a touch more oil for the onions, they picked up all the color and residue from the pork and cleaned the pan nicely, then I cooked the chorizo last, ending with deglazing the pan.