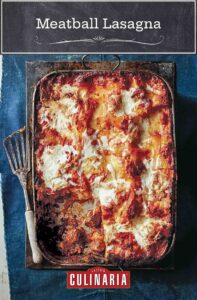 This meatball lasagna is a playful riff from Alex Guarnaschelli on the Italian classic where tender mini beef and veal meatballs stand in for traditional meat sauce.

Meatball lasagna?! Yep. It’s a sorta playful riff on the Italian comfort food classic with bite-size meatballs standing in for the usual meat sauce. Yet all the cheesy goodness of traditional lasagna remains unchanged. It’s from celebrity chef Alex Guarnaschelli (and you can take it seriously because, c’mon, look at her last name!) The recipe makes an ample amount, although you won’t have any difficulty using up leftovers. In fact, you may have to break up a fight or two.–Angie Zoobkoff

I want to make this for a gathering. Is it better when made ahead of time?

It is, actually! We had a number of testers comment on how this is one of those miraculous dishes that get better with a little time in the fridge. We’d suggest 24 hours ahead is good. Too much more than that and you might find it starts to dry out.

The recipe recommends whole San Marzano tomatoes. What are they?

San Marzano is a very specific type of plum tomato that comes from the San Marzano region of Italy. They’re prized for their sweetness, flavor, and lower acidity, as well as being meatier with fewer seeds and easier to peel. They can be a little harder to find but are worth searching out. If you can’t find them, “San Marzano-style” is close and will still be better than your average, grocery store canned tomato–they’ll likely be from somewhere nearby, but not directly in, San Marzano, Italy.

How do I make my own breadcrumbs? 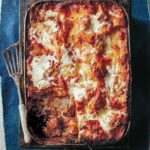 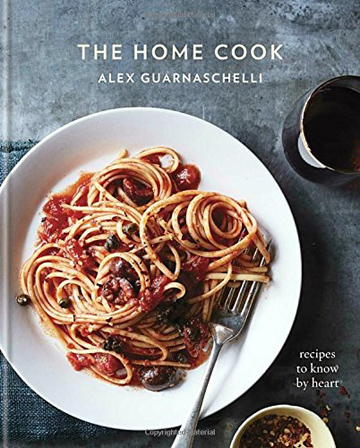 Even traditionalists will fall for this riff on classic lasagna. The mini meatballs have all the flavors of meat sauce, delivered in tiny textured morsels.

I found the recipe to be adaptable to time and scaling. I needed to halve the casserole as I didn’t have an afternoon to spend in the kitchen. I made the meatballs on a weekday after work. I made the whole quantity of meatballs and half of them disappeared that night, a testament to their tastiness! Two days later, I made a half recipe of the sauce, boiled a half box of noodles, and assembled the casserole in a shallow 8-by-10-inch baking dish (pleasingly, the exact length of the noodles!). I did come up short with the amount of sauce required, so I ended up using the entire 28-ounce can of tomatoes in the sauce instead of just half of it.

Limited grocery access left me unable to find ground veal or panko so I used all beef and Italian-seasoned crumbs.

The short simmer time yields a slightly watery, very chunky result, even after I broke them up with a spoon. However, the noodles soaked up the sauce pretty well and did even better as leftovers; in fact, the lasagna was even better the second time around.

I used the full amount of Parmesan in the meatballs but when it came time to layer the lasagna, I eyeballed a good sprinkle in between each layer and over the top. Used the large end of a melon baller to portion the meat which worked great and I had 50 meatballs.

This stores well and the lasagna was less weepy the second day, when the slices cut beautifully and the noodles weren’t soggy at all. Better than any other reheated casserole pasta I’ve made, in fact. We enjoyed it so much the first time around and the second night it was even better.

This is an excellent recipe for a family favorite. The little meatballs make for a nice change from the normal ground beef filling or sliced meatballs. The flavors of the sauce are sharp and garlicky, a perfect foil to the creamy ricotta and melted mozzarella. The amount of sauce and filling is perfect and the slices maintain their shape well on the plate. (I really hate it when a lasagna piece falls apart into a mess as soon as it’s removed from the casserole dish.)

We enjoyed the lasagna the day I made it but it really improved with age! My wife declared it much better the next day when she heated up a slice in the microwave. The most time-consuming part here are the small meatballs but if you have some kitchen help (I volunteered my son), rolling the meatballs goes by fast.

I highly recommend weighing the Parmesan cheese in the meatballs. It’s more than you think if being grated fresh as it’s closer to 1 1/2 cups. Skimping on the cheese makes for an okay meatball but using the whole amount is what makes these excellent.

Definitely leave the noodles very firm. I’m not talking al dente here. These are undercooked but pliable. They work great in this dish and finish cooking perfectly without turning to mush.

Remove the ricotta from the container and put it in a bowl. Whip it well with a spoon or whisk to make it a bit looser and easier to use. Dollop on each layer then when you put a lasagna layer on top press gently to spread the ricotta a bit.

I quite enjoyed this meatball lasagne. The tiny meatballs make it different enough to be a standout along with the creamy cheese filling. I will likely make this again. It makes a lovely dish to serve to guests.

I never add sugar to a tomato-based dish and I disliked the way it made the final dish taste, especially paired with such a large amount of ricotta cheese. The comments from my guests were all very positive, though; no one disliked the sweetness as much as I did.