This Italian-style braised chicken in wine is made by gently simmering chicken pieces in a sauce of wine, peperoncino, and tomatoes until tender. Fancy enough for company yet completely doable on a weeknight.

This southern Italian-style braised chicken in wine has us smitten with its rustic ability to coax incredible flavor from a handful of everyday ingredients, creating something that’s comforting and luxurious all at once. In this one-pan wonder, chicken pieces are gently braised in wine spiked with peperoncino and tomatoes until tender. It’s elegant enough for company yet completely doable on a weeknight.–Angie Zoobkoff 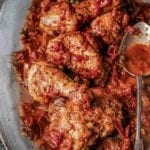 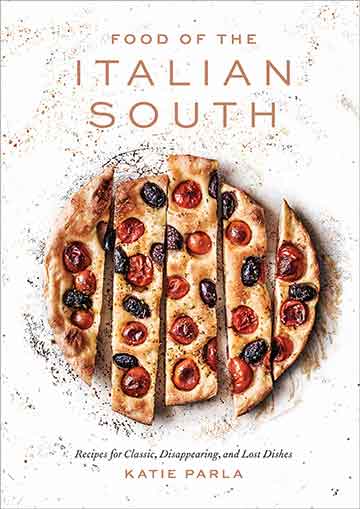 Simple, rustic and doable with staple household ingredients. I couldn’t ask for too much more from a recipe for a midweek dinner. This one reminds me a lot of the classic flavors and process for a Pollo all a Cacciatore minus the mushrooms.

We loved the stew and served it with crisp oven roasted potatoes but it would be equally at home with mash, pasta, rice, or crusty bread.

This is a delicious, no-fuss, comforting dish that’s perfect for midweek dinners. The chicken is succulent and juicy and manages to retain its crisp skin whilst sitting in a wonderfully reduced and thus creamy sauce.

I didn’t think any tweaks were needed really. Lovely just as it is.

I used lard. I was dubious about this because I frequently fry chicken pieces without any fat because the fat renders down from the skin and provides enough to cook the meat without adding extra fat. I was glad I did, though, because the flavor of the sauce at the end, I think, was so successful because of the use of lard. I would imagine it’s good with olive oil but I was really pleased with these results and would stick to using lard when I make it again. I also used Villa Maria New Zealand Sauvignon Blanc.

It took me 11 minutes to brown the chicken though I would probably fry it for a little longer next time to ensure it’s really nice and golden. I realized at the end that this is the only time the chicken will get to brown the skin to nice and crisp so it needs to be done at this stage as there is no opportunity later.

After another 5 minutes the sauce was very thick—thicker than gravy. I spooned (dolloped) the sauce onto the plate and placed the chicken pieces on top. I didn’t think the sauce was too dry and in fact felt this amount of reduction resulted in a more flavorful sauce.

The basil was nice with it but it easily could have coped with a lot more—say, at least double the amount. Or rosemary would work well.

We ate it with roasted crashed potatoes cooked in olive oil and rosemary along with garden peas. Next time I think we will have it with mashed potatoes for a real comfort food meal.

I adore rustic Italian dishes like this one! Just a handful of quality ingredients that magically come together to create something much larger than the sum of its parts. You can almost imagine enjoying this delicious chicken dish in the kitchen of someone’s Italian nonna.

The texture of the sauce was perfect. The tomato pieces were still pretty intact after cooking for about 30 minutes but they were just broken down enough so that the chicken was nicely coated. This is definitely a dish to serve with a simple pasta side, polenta, or even crusty bread for dipping. Whatever you have on hand to sop up the tasty sauce.

I used an Italian Pinot Grigio and my tomatoes were ripe, organic beefsteak tomatoes I served it with some orzo pasta and a tricolore salad with a balsamic vinaigrette.

I was pleasantly surprised by the results of this recipe. The flavor was what I was hoping for, but the sauce I ended up with wasn’t as thick as the photo despite having a lot of flavor along with a little bite from the crushed red pepper.

It was a really delicious dinner. I served it with brown rice and a salad and everyone ended the meal very, very satisfied.

This is a good weekday chicken dish with not a lot of fuss. The sauce had great flavor—you could really taste the heat from the pepper flakes.

Most of the instructions were straightforward, except wouldn’t you want the breasts, as the biggest pieces, to cook the longest? [Editor’s Note: We understand the concern, yet chicken thighs are notorious for taking longer to cook than chicken breasts, even though it’s a seeming anomoly, which is why chefs often prefer to cook chicken as pieces rather than a whole hen as the white meat tends to be overcooked by the time the dark meat is done.] I reversed this. I served this with the Eva Longoria roasted asparagus recipe and extra chardonnay! Yum!