These chipotle chicken wings, which are coated in a spicy chipotle, brown sugar, and paprika rub, are served with sweet potato wedges for a fun and easy sheet pan dinner.

Adapted from Rukmini Iyer | Dinner’s in the Oven | Chronicle Books, 2018

These are not your ordinary chicken wings. Coated in a spicy, sticky, chipotle chile powder, paprika, and brown sugar rub and roasted with sweet potato wedges, these no-fuss wings are an easy, single sheet pan stunner.–Angie Zoobkoff 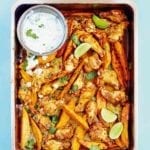 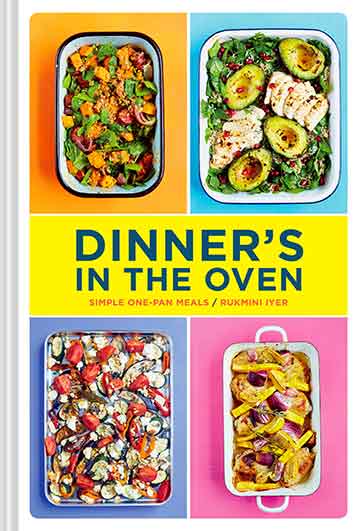 Slam dunk sheet pan dinner! Preparation is quick and the finished meal is on the table within an hour. I jumped at the opportunity to prepare an alternative approach to a family favorite.

Recipe is intended to serve 4 but I knew that 1 3/4 pounds of chicken (15 wings) would not be enough, especially since it was our main course and I have growing teenage boys. We didn’t need a fight on our hands! (I do think the quantity written would be perfect as an appetizer or for smaller appetites.)

I decided to double the recipe and use 2 sheet pans, use a family-size package of quality chicken wings and drumettes, and about 3 pounds of sweet potatoes.

I was careful not to crowd the chicken and sweet potato wedges close together in the pan for fear of creating too much steam. There is a lot of moisture created in the first 40 minutes at 350°F. Once I increased the heat to 400°F, both ingredients crisped up nicely. The brown sugar caramelized on the pan side of the sweet potato wedges. I did not turn the “spuds.” I used about 3 limes for each pan.

The yogurt cilantro lime sauce was delicious and a welcomed “coolness.” I used the whole bunch of cilantro and 2 limes in the sauce. It’s a wonderful recipe! Next time I might do one tray of wings and the other tray of chicken thighs. Make sure you have plenty of napkins and maybe a fork for your wedges. It’s a yummy mess!

The tangy lime yogurt sauce for dipping is a perfect counterpoint to these spicy baked wings and fries. The chicken emerged juicy and the potato wedges were thoroughly cooked and still firm but becoming soggy by the end of the cooking time. The potatoes firmed once they were off the pan and remained intact while being moved.

The chicken pieces didn’t crisp up when the temperature was raised but they were done cooking at the end of that time and tasted great. I think I would try cooking everything at a higher temperature next time (say, 375°F) and then finishing for a few minutes under the broiler for crisping.

A half sheet pan was just big enough to contain all of the pieces. Since the coating tended to pool up on the surface of the pan as everything cooked, turning the potatoes partway through to even things out might help mitigate the tendency towards sogginess.

We enjoyed these. They were pleasantly spicy and the cooling sauce was delicious. I will be making this again with a few adjustments.

The yogurt sauce was quite good and didn’t need more lime. It helped temper the spiciness some. While they weren’t insanely spicy, they were up there on the heat scale.

I added the full amount of salt but it’s way too much for me in an everyday meal, so I would halve it (at least) next time. The salty merged with the spicy so it was not distinct in the flavor. I restricted the amount I ate of this because of the salt I knew was in it, but it probably would be 3 to 4 servings under different circumstances.

Who can resist a good two-for-one recipe? Two components–wings and fries–but just one spice mixture! I did end up doing the wedges and wings on separate pans because they seemed too crowded. Personally I could’ve used more heat from a recipe that calls itself spicy, but overall the recipe’s method worked.

The wings were sticky and the fries were nicely roasted rather than soggy, which my past attempts at homemade sweet potato fries usually end up as.

I also got a lot more lime flavor from the yogurt dip than from the wings.

This could serve 4 as an appetizer or 2 for a meal in front of the TV, as my boyfriend and I enjoyed it.

After 20 minutes at 400℉, the wings had quite a bit of liquid in the bottom of the pan and the skin seemed like it would still be chewy, so I left them in for an extra 10 minutes, which did the trick to dry the outside just a bit. I think it would be hard to get actually crispy crunchy skin like the fried wings at restaurants, but this was still good for an at-home version.

The sweet potatoes also were left in for the extra 10 minutes to dry out the wedges a little more so they weren’t soggy. I did flip the potatoes just to make sure they got heated evenly, but they didn’t *need* to be—they weren’t getting overly brown on the surface.

My boyfriend and I liked them, but I think a little shake of cayenne would help add a little more kick. I think this would make 4 small appetizer servings or 2 for a meal.

This recipe is fantastic for many reasons. The chicken wings were cooked perfectly, the spices made the sweet potatoes taste amazing, and the yogurt sauce provided a refreshing and flavorful accompaniment.

This recipe could also be easily split, with modifications to the amounts of spices, to cook just the sweet potatoes as a side dish or just the chicken wings on their own. We loved these and are already planning to make them again. I didn’t have a baking sheet or roasting pan big enough to hold everything comfortably for roasting, so after mixing everything together, I transferred half to another baking sheet.

I also found it helpful to turn some of the sweet potatoes part way through if they looked like they were getting extra browned on the bottom.