This yogurt and spice marinated salmon is a quick and easy weeknight meal made with pieces of fresh salmon that are coated in harissa-spiced yogurt and roasted at a high temperature.

I love to cook salmon in the oven. It’s lazy, quick, works really well, and you don’t need any oil, as salmon is naturally fatty and delicious. These little salmon bites are something I’ve made time and time again over the years and this method of roasting them at a high temperature ensures you get a little charring on the outside yet perfectly cooked salmon on the inside. Leftovers also make a great addition to your lunchbox the next day.—Sabrina Ghayour

I’m not a huge fan of spicy dishes. What can I do to get the all great flavor without too much heat?

By just cutting back the amount of hot spices, you do get a more moderate heat but you’ll lose lots of fabulous flavors, too. Instead, try using sweet paprika and mild harissa to temper the heat.

Can I leave the skin on my salmon?

You sure can. Either cut the pieces into large chunks and follow the recipe directions or leave the pieces whole. Large, solid pieces of salmon may take a minute or two longer in the oven but will cook just as well. Once cooked, just flake the meat off the skin, as our tester Olivia Bleitz did. 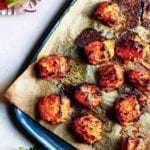 This yogurt and spice marinated salmon is a quick and easy weeknight meal made with pieces of fresh salmon that are coated in a harissa-spiced yogurt and roasted at high temperature.
Prep 10 mins
Cook 15 mins
Total 25 mins
Mains
Persian
4 servings
214 kcal
4.67 / 6 votes
Print Recipe 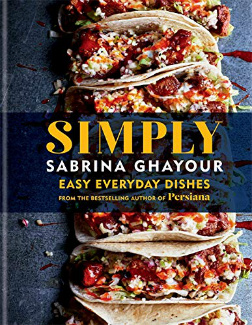 11/10. Ridiculously fast! Ridiculously good! Where has this recipe been my whole life? It’s a weeknight dream. It took all of 15 mins to prepare (and that is only because I had to remove the skin from my salmon) and 10 mins to cook. BOOM—dinner was on the table in 25 mins. The salmon was so tender and flavorful that I’ll be making it regularly and serving it every which way I can think of (in tacos; over rice; on top of salad; the list goes on…)

In the marinade, I used regular harissa, hot paprika, and half a lime’s worth of juice. And 10 minutes was the perfect cooking time—they were just starting to get beautiful charred bits.

I added a few extra items to the selection of toppings: red cabbage for crunch and Leite’s pickled jalapenos for some extra spice and saltiness. Both were incredible and I would highly recommend them! To serve, I added finely chopped red cabbage and the pickled jalapeno. Incredible!

Serves 3 to 4. Depends on how hungry you are…in our case, it was enough for 3 (because it was so good we kept picking at the salmon.) 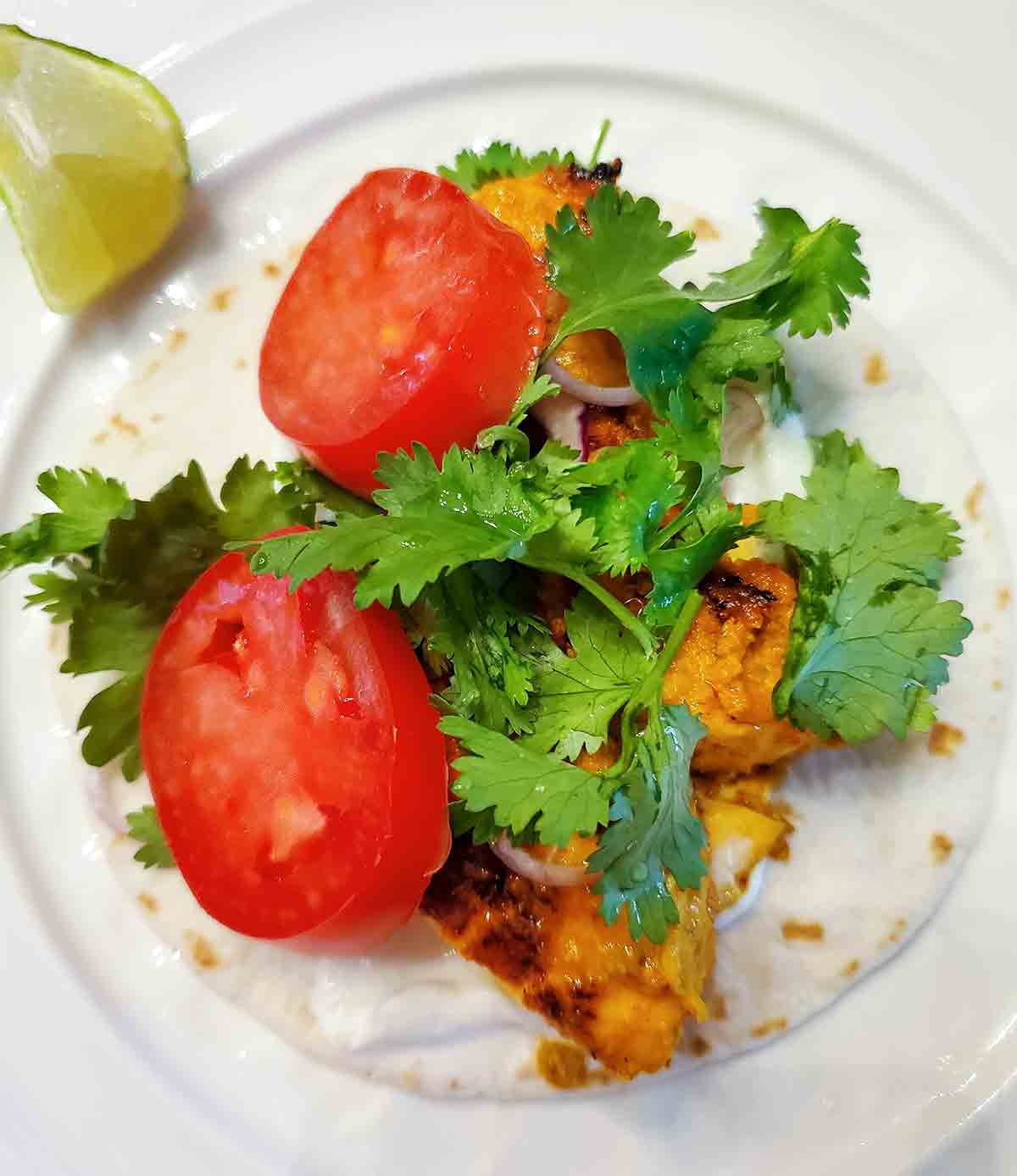 Wow. This was seriously, just, wow. The flavors, the simplicity, the fact that the finished product went into tortillas…it’s a weeknight dream meal!

I used fresh wild king salmon. Admittedly, it was skin-on, but I didn’t want to risk pulling the salmon apart by taking the skin off so I just cooked it with it on. Instead of leaving the fish in cubes, I flaked it apart when filling my tortilla so the fish was more evenly distributed.

I served it with all of the recommended toppings plus a homemade tomatillo salsa; a carrot, red cabbage, and carrot slaw; and homemade tortillas. The whole thing just SANG.

Everything, from the flavor of this dish to its easy preparation, was a hit! I served this yogurt and spice roasted salmon over some brown rice with a garnish of chopped cilantro, diced red onions, and diced ripe plum tomatoes.

The two of us had some for dinner and I’m planning to enjoy the remaining salmon for lunch the next couple of days simply tossed over a green salad.

As for the recipe itself, I used sweet paprika. I was hesitant to cook the salmon at this temperature, to tell you the truth! I just knew the yogurt mixture would get too smoky so I cooked my marinated salmon pieces at 475°F for 10 minutes, which worked very well. I loved the flavor combo here and highly recommend that however you choose to serve it that you do serve it with fresh garnishes as suggested—the combo of the well-spiced, hot salmon really does pair well with the freshness and cool taste of the tomatoes, onions, and cilantro.

Wild-caught salmon is one of our favorite meals. Most of the time we simply steam the salmon—this yogurt- and spice- roasted salmon is now our new favorite! Beautifully flavored with simple ingredients. Fiery harissa and smoky paprika stand up to the flavor of wild salmon. The fish was moist, flaky, and perfectly seasoned. The dish paired really well with fresh tomatoes and the crunch from the sliced onion.

I used smoked paprika as I felt the addition of smokiness would enhance the flavour profile. I left the salmon in the marinade for around 15 minutes to allow time for the flavors to combine. Be sure to watch the cooking time as 10 minutes is ample time to cook the salmon. Next time I would cook it for around 6 to 7 minutes to try and keep the salmon pink in the middle.

Needless to say, I’m hooked on this combination. A perfect midweek meal—simple, quick, and bursting with flavor. Two servings with no leftovers!

I was prepared for this recipe to fail. I laughed at the audacity of the author asking me to throw tender chunks of salmon into the hottest oven I could muster and expecting anything other than disaster to ensure. In fact, I was so certain of the outcome that not only did I minimize my risk by purchasing the least expensive salmon I could, I had a backup meal ready to go. It felt cruel sending my salmon chunks, slathered up in yogurt sauce, off to the executioner. This year was already bad enough, did I have to ruin perfectly good seafood now, too?

Ten minutes later I could not believe what emerged from the oven. Not only did it smell wonderful (no fire or smoke in sight), but the fish was perfectly cooked and flaky, not dry in the slightest, and packed with flavor. The coating makes it taste similar to tandoori chicken. We ate pieces straight from the baking sheet and then made the suggested wraps using the rest of our lime zest and juice to jazz up the yogurt with a bit of salt for a sauce to spread inside.

While the wraps themselves were good, it was the salmon that was the scene-stealer. We kept poking the pieces, convinced at least ONE of them must have been overcooked and dry: we couldn’t find one. Everyone agreed it is one of the best things we’ve eaten this year.

Tip: Make sure to taste the seasoning levels of the sauce BEFORE adding the raw salmon. You’ll likely need more Maldon salt than the recipe calls for.

This recipe seems to be a riff on a tandoori meal one could make at home without a clay pot oven. As I subscribe to Sitka Salmon Shares, where fresh wild fish are caught, flash-frozen, and shipped to some areas of the US, I had some right at hand. And salmon is such a great fish that can stand up to a lot of intense spices.

I used a fillet of salmon for this dish. And because it was wild, I also needed to remove the pin bones and skin, so it took a little longer than a store-bought salmon. I do a bit of Middle Eastern cooking, so I usually have a jar of Mina’s brand mild and spicy harissa in the fridge. For this recipe, I used the mild one plus sweet paprika, as I was unsure how the spice level might end up.

It took a while to get the oven up to a high temp and then placed the fish on the top shelf to give it the most heat. I checked it after 5 minutes and kept it in for 9 minutes overall. That was probably a minute too long.

I served it with thin slices of sweet onion, heirloom tomatoes, and I mixed my Greek yogurt and cilantro together so it was more like a crema or raita. I had recently made some sourdough discard tortillas so they paired nicely with the fish.

Overall, it was a nice dish. It has an Indian flavor profile, a bit sour from the lime, which is offset by the yogurt crème when in the tortilla. The fish has a mild to medium level of spiciness, so I may try a mix of mild and spicy harissa in the next version. I used sweet paprika.

My better half advised me to add this to our repertoire of ways to cook salmon as she quite enjoyed it. I think that next time we might add a bit of cumin and garam masala to the marinade. I’ll likely also add some cucumbers and garlic to the yogurt next time to make it more like raita.

By the way, I made enough marinade to put it on a few pieces of 13- to 16-size shrimp, which I cooked with the salmon and that’s an even better combination.

Tandoori-style salmon is one of those restaurant splurges I never thought I’d be able to master on my own, but this is a quick, foolproof way to enjoy the experience at home. I was worried the extreme heat would dry out the protein pretty quickly, but the yogurt acted as a tasty shield to avoid that dreaded fate. Instead, the salmon was perfectly flaky and its butteriness…oh, it’s butteriness! I can’t get enough of it.

The yogurt marinade added a nice tang and subtle smokiness to the salmon. While it had a little grittiness from the lime zest, it was barely noticeable because I was just so enamored by everything else that was happening in my mouth. It also turned into a light crust by the time I took it out of the oven, giving the fish a little extra texture.

I used smoked paprika. In lieu of eating it with the suggested tortillas and accompaniments, I served it with a bowl of green rice and Cuban-style black beans.

What’s for dinner? Something light, fast, and relatively healthy? Do you like salmon? Do you like slightly spicy? Do you want to have dinner in less than a half-hour and not have a ton of dishes to do? If your answers are an enthusiastic YES, this is the meal for YOU!

My husband was a little peeved that his football team lost. Our two daughters were hangry and have the tendency to be a tad on the picky side. And even our dog wasn’t eating his food. I was hopeful that this recipe was going to satisfy and it did. Everyone left with a smile. This recipe will now be in regular rotation. (I didn’t give it to the dog, but upon smelling the salmon cooking, he decided to eat.)

I baked the salmon for 10 minutes. It was perfectly cooked. I served it with the recommended tortillas, onion, Greek yogurt, cilantro, and onions. It served 4 but we would have happily eaten more.