This lemon confit is nothing more than thin slices of lemon that are slowly cooked in a sugar and vanilla syrup, yet its ability to elevate all manner of desserts and beverages is anything but understated.

Lemon confit–or really citrus confit–is for when you want to add a bit of citrus glitz to cakes and bakes. It’s sweet and soft, but not so candied as to be chewy. The citrus is soaked in cold water as a pre-soften for the white pith, so it turns beautifully translucent when cooked.–Natalie Paull

HOW DO I USE LEMON CONFIT?

These pretty slices of citrus have so many possible uses. Try one of the below or let us know what you did in a comment below 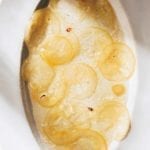 This lemon confit is nothing more than thin slices of lemon that are slowly cooked in a sugar and vanilla syrup, yet its ability to elevate all manner of desserts and beverages is anything but understated.
Prep 15 mins
Cook 9 hrs 45 mins
Total 10 hrs
Dessert
French
12 servings
70 kcal
4.50 / 2 votes
Print Recipe 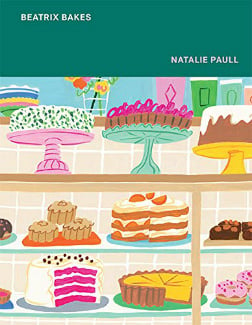 Get a little extra spice mingling in there. Try star anise and tangelo, which are exquisite together. Or orange with a cinnamon stick or a few cardamom pods.

This is a nice alternative to the candied citrus recipes I use on desserts. It’s easy to prepare and the result is still citrusy but mild and not nearly as sweet as candied citrus. I like it!

The only tricky part is slicing the citrus. I chose to use Meyer lemons for my confit, and I sliced them with a mandoline with four pre-set thickness choices. The recipe suggests a thickness of about 1mm, so I used the 1.3mm setting. I found it very difficult to get the slices as described in the recipe. Very few came out intact, but I found the result quite satisfactory for a rustic look on the cheesecake I topped with my confit.

I used a 1 quart saucepan, which was more than roomy enough for the liquid and fruit. I used normal sugar and observed no problems and no graininess in the end result.

This flexible recipe could have infinite applications. Whatever citrus you have on hand (right now I have limes, pomelos, lemons, grapefruit, and oranges—hard to just run this recipe once!).

This recipe was incredibly easy, even without a mandoline, and I’ll be making it a regular part of my repertoire in the spring for lemon poppy tea cakes, shortcakes, and poundcakes; in the summer for limeades, lemonades, and cocktails; in the winter for orange clove tea cake. While the citrus confit can stand alone, the leftover liquid (including from the first pour off, to which I added ice and cucumber for a refreshing wake-me-up morning flavored water) and syrup are invaluable extras. At the very least, this recipe gives you two for one, and if you ensure that your seal atop the citrus in the oven is super tight, your leftover syrup yield will be generous enough to experiment with in cocktails, as an extra glaze on a layer cake, and, as suggested by the recipe, in a luscious whipped cream to go with pound cake. It would also be excellent in lemonade.

Whatever spices you want to add, this base recipe reads more like keeper technique than gospel. Next time, I’m trying an grapefruit and cardamom or orange and clove situation. As soon as I completed the recipe using fresh lemons, I ate some directly from the pot (and had to force myself to stop), stirred a couple into my apricot tea, and considered what baking project should be on deck (classic lemon pound cake was the winner!) to gild the lily, so to speak.

I’m not a big sweets person, so I made this with the intent of using it to add a bit of glitz to yogurt, to a cheese board, to spreads like labneh or cream cheese, a compound butter, atop ice cream—funny, it looks like I’m all in for this with a variety of dairy options! Because of my intended uses, I especially liked the note at the end about overcooked (or caramelized) confit can be chopped up and used in place of citrus peel in recipes, which tempted me to overcook the confit on purpose. While I didn’t do it this time, on subsequent batches, instead of overcooking all of it, I’d likely remove half as per the true confit recipe here, and then overcook the other half.

I foresee using the leftover syrup in exactly the same ways, stirred into yogurt, drizzled atop cheese on a board, mixed into spreads or compound butter, and spooned atop ice cream. This citrus confit in its syrup packed into a pretty jar would be a lovely holiday gift, especially as citrus can be so wonderfully uplifting during the cold and dark holiday months.

Additionally, if this citrus sounds tempting—which it is!—another recipe that will likely also be of interest is the Candied Kumquats.

Lastly, this interested me in no small part because of its use of the whole fruit, including the citrus peels, which often go to waste. Coincidentally, The New Yorker published today an article by Tamar Adler, entitled “All the Ways to Not Waste Your Citrus Peels,” which provides more exploration of this interesting subject, especially for those of us interested in the intersection between food and cooking and sustainability.

To speak of servings for what I consider a condiment is a conundrum, as one could certainly sit and nibble on the whole batch (the equivalent of two pieces of citrus fruit, albeit with a lot of sugar!), or it could be parceled out, a little atop yogurt, a little on a cheese board, a spoon in a spread, in which case it would last for many servings, likely a dozen or more.

I used a large navel orange and a fairly small sized lemon. Having done this, I now want to expand the repertoire of citrus to include some more flavors, especially those on the tarter side, and more colors as well. This could include grapefruit, ugli fruit, pomelo, blood orange, and lime, for example. I’m especially interested in the play of the more tart citrus fruits with the sweet syrup. However, if going with a larger citrus or pair of citrus, it might be necessary to increase the syrup, since, with my 1 medium and 1small citrus, I had to seriously press down on the parchment in order to make certain my citrus was all snugly submerged within the syrup bath at the outset of the cooking time. Additionally, making a one and a half or two times batch of the syrup would yield additionally the pleasure of leftover syrup to play with. Options for the syrup not paired with dairy could include a spoon in hot tea or lemonade; a spritz in seltzer water or soda; or a drizzle on French toast, waffles, or pancakes.

Note that, following a mandoline incident at my house (yes! It was me!), the mandoline has been retired. I used the super sharp serrated knife discussed as an option and had nearly perfect success achieving the super thinly sliced yet intact cross section slices described. I had the perfect casserole dish for the oven portion, but it wasn’t flameproof, so I ended up using an extra dish, and made the sugar syrup in a saucepan followed by cooking in the casserole dish.

The timing noted was short for my fruit. My lemon was starting to turn translucent at 60 minutes and my orange pith took even longer, a total of 1 hour and 15 minutes.

I think my confit is prettier than that accompanying photo, as my oranges lent color to the otherwise pale lemons; it may be partly the bright sunshiny lighting of the photo, but even my lemons were more colorfully yellow than those depicted in the photo.

This is a simple recipe—the tough part is not eating all the slices as soon as they leave the oven! The next challenge is deciding what to do with them, I’m thinking of arranging them on top of a plain cheesecake. Or maybe I could incorporate the syrup into buttercream, then use the pretty slices to decorate the cake.

Adding a couple of star anise was a real win for flavor, so you can bet none of that syrup will go to waste. It will be excellent in cocktails or soda water.