Blueberry and white chocolate mousse from Donna Hay is made with simple ingredients yet its taste is anything but simple. It’s actually quite sophisticated. We think you and everyone who tries it will feel the same.

Never had white chocolate pudding? Think of a ganache made with white chocolate. It’s a simple yet stunning dessert and exactly the sort of cooking that’s made cookbook author and magazine maven Donna Hay, oft referred to as Australia’s Martha Stewart, renowned the world over. And it’s so memorable it just may make you renowned in your corner of the world.–Renee Schettler Rossi

This recipe requires little kitchen know-how although it does demand some patience at two different stages. First, be sure to resist the urge to stir after you sprinkle the gelatin over the cold water. It’s imperative you not disturb it while it’s “blooming,” as this allows the gelatin to absorb the water evenly and, hence, dissolve smoothly when it’s heated a little later in the recipe. You may also need to sit on your hands while the white chocolate mousse chills. It will have an unspeakably more impressive texture if you can stash the dessert in the fridge for at least an hour, preferably longer. Who says patience doesn’t pay? 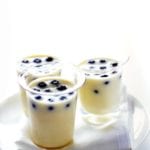 Blueberry and white chocolate mousse from Donna Hay is made with simple ingredients yet its taste is anything but simple. It’s actually quite sophisticated. We think you and everyone who tries it will feel the same.
Prep 20 mins
Cook 10 mins
Total 1 hr 30 mins
Dessert
American
6 servings
378 kcal
5 from 1 vote
Print Recipe 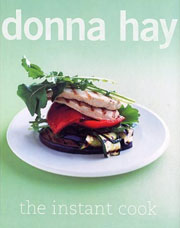 This produces a delicious and elegant dessert with the white chocolate providing a mellow background for fresh blueberries. It’s very rich so a little goes a long way. The instructions are simple and straightforward, requiring almost no effort. The only thing I found confusing is the consistency of the “mousse.” With the addition of the gelatin, it has a more pudding-like consistency when it has set. While this is not a bad thing, it was confusing to several of my tasters, who are used to a lighter mousse texture. I will certainly make this again, but perhaps add a cup of whipped cream to the cooled cream and berries to lighten the texture.