This eggplant caponata is a classic Italian dish made with eggplant, celery, fennel, zucchini, garlic, onion, tomatoes, and olives and is finished with almonds and pine nuts.

This eggplant caponata recipe actually turns out something more akin to a rich, intensely flavored, chutney-like condiment rather than the more traditional eggplant caponata. No complaints here. It’s a roll-up-your-sleeves, spend-some-time-in-the-kitchen type of recipe. And worth every second. And, as the authors of this recipe explain, it turns the familiar purple-black vegetable so many of us don’t really know what to do with into something that’s silken and sexy and just sorta has to be experienced.–Renee Schettler 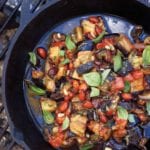 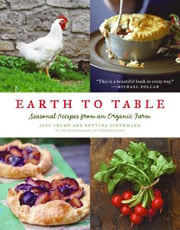 This eggplant caponata is full of flavor and textures and is good with grilled meats or as an entree for a vegetarian meal. My husband normally turns his nose at eggplant, but he actually complimented this dish—plus he had seconds!

Give yourself plenty of time to make this dish; it doesn’t come together quickly, so you really want to make sure that you can put it in the fridge for the suggested 8 hours to let all the flavors meld. This recipe says that it serves eight, although I would say it’s more like 10 or 12.

I love both the versatility of a traditional Sicilian eggplant caponata as well as its sweet, salty, and tangy flavor combination. Whether as a topping for bruschetta, tossed into al dente pasta, or as a sauce for grilled protein, the colorful combination of eggplant, tomatoes, olives, capers, and basil with a touch of vinegar is sure to please any palate!

This particular recipe was attractive to me because in addition to its classic ingredients, it also had fennel, zucchini, and raw almonds, which were all new to me! The more veggies the better, in my opinion, but I loved the combination of pine nuts and raw almonds that are added at the last minute for crunch.

I had some ripe red slicing tomatoes from the garden on hand, so those are what I used here; and I used organic golden raisins in the sauce as well. I think with such a traditional recipe like this one, it’s super important to follow the steps very closely! You can tell this is a tried-and-true recipe by all of its descriptive steps; if followed correctly, the results will be just perfect. Each step seemed to be very perfectly timed in terms of cooking each portion of ingredients. Just a note, cooking the eggplant separately first in oil until golden brown really gives the eggplant a silken texture that’s just lovely.

I allowed the caponata to cool for 1 hour and then spooned it into shallow bowls and topped it with the grilled salmon fillets. Served with a mellow glass of Italian red wine and a fresh summer salad of cucumbers, feta, radishes, and watercress, we were in for a treat!

I used the caponata last night as a sauce for some grilled salmon fillets and plan to use the rest tossed with fettuccine.

I have never had eggplant caponata but the recipe sounded so good, I had to try it. It was quite time consuming, lots of dicing and stages of cooking, but the worst part was you had to wait 10 hours before you could even eat it! The components of the dish, varying from raisins and fennel to celery to eggplant, amongst many other things, turned out to be positively delicious. The eggplant did get a little soft, but after refrigeration overnight, the textures and flavors complemented each other.

One thing I would change would be to use a little less oil in the beginning. I felt 1/2 cup was too much and that 1/3 cup would have been sufficient. Other than that, the recipe is clear and times are accurate. I used a high heat when cooking celery and fennel, then adding zucchini to get a little color. The toasted nuts and basil really take it to another level.

I would serve this as a side dish for grilled chicken or fish, but I think you could use it as a bruschetta topping. We enjoyed it as a meal! I only wish it made more. This was a lot of work for only 6 servings, so if you can, go ahead and double it. You’ll be glad you did after you taste this delightful caponata!

There’s a lot to love about this eggplant caponata recipe. It’s like a farmers market one-pot side dish. It has all the textures and tastes that really sing in the fall.

For me, the garlic didn’t come through, if at all, and was masked by too much sugar. I would make it again with 2 cloves garlic and 1 tsp sugar. It’s possible that the fall produce was sufficiently sweet on its own this time of year, so the additional sugar pushed it over the edge. Given the recipe calls for raisins, this adds to the sweetness coming through.

I grew up in a Sicilian household, so I have tasted my fair share of eggplant caponata. This recipe is a winner! It’s actually quite different from the caponata recipes I’m used to, so I wasn’t sure how I’d feel about. My family’s caponata does not include celery, fennel, or zucchini, but I will say that this recipe converted me. I really liked the various textures—the celery and fennel were crunchy while the eggplant and zucchini were on the verge of melting. Absolutely delicious. It was the perfect balance of agrodolce (sweet and sour). I truly think if my grandmother were still alive, she’d approve of this caponata and let’s be honest, Italian nonnas are tough critics!

Eggplants aren’t nearly as bitter as they used to be. I still did this step for the sake of the recipe, but only let it sit for 30 minutes. Some water came out, but not a lot. I also like to put a weight on top of my eggplant to help force the water out a little faster.

I love recipes for a dish that tastes better after a few days and a classic eggplant caponata is certainly one of them. I’ve only made a traditional Sicilian version, so this one had me a bit skeptical at the inclusion of zucchini, fennel, pine nuts, and almonds. I’ve also never been instructed to salt the eggplant before cooking it for a caponata.

I love that this version makes use of summer’s garden tomatoes instead of canned tomato. I let this sit in my fridge for a few days. It’s excellent. I’m impressed that the zucchini and fennel work so well and developed the consistency of the other vegetables. And the nuts provided a nice crunch to the dish. I’ll be eating this with dinner all week!

I used the hour that the eggplant sits in the salt to cut and prep the remaining ingredients. It made cooking the caponata a breeze.

Although this eggplant caponata recipe involved a fair number of steps and took a while to make, the result was so flavorful, I’ll definitely be making it again! We enjoyed this warm, with some pasta, as a side dish for chicken, and on its own as a starter. So versatile!

We stored this in the fridge after cooling and it was still good 7 days later.