These five-spice chicken wings are easy to toss together in minutes and taste contemporary even though they rely on a traditional spice blend. They’re baked and served with a creamy cilantro sauce for a more refined riff on classic Buffalo wings.

The sweet yet not too subtle heat of five-spice powder may not be what you typically think of in terms of chicken wings. But these unconventional and very un-incendiary wings are an unexpected keeper. The easy-to-achieve crisp skin comes from the blast of a hot oven rather than the splattering of hot oil, which means ease of cooking as well as cleaning up, which only further endears these wings to us.–Renee Schettler Rossi 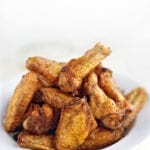 These five-spice chicken wings are easy to toss together in minutes and taste contemporary even though they rely on a traditional spice blend. They’re baked and served with a creamy cilantro sauce for a more refined riff on classic Buffalo wings.
David Lieberman
Prep 15 mins
Cook 25 mins
Total 40 mins
Appetizer
American
40 servings
122 kcal
5 / 2 votes
Print Recipe 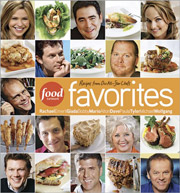 For the five-spice chicken wings

For the creamy cilantro dipping sauce

What an easy and simple recipe. You can make this as an appetizer or as a meal. We chose to make it as a meal and all of us loved it. It has a little kick but it’s not so strong as to make people shy away. My toddler alone ate 10 wings. Next time I will be making more of the dipping sauce as she alone ate half of it! It was perfect to lighten the flavor.

I knew I would like these chicken wings as soon as I saw “Five Spice” and this recipe did not disappoint. The warm spice blend is wonderful as-is on chicken as well as pork and a little cayenne added a sharp dimension to the rub. Thanks to the high oven temperature, the chicken wings were addictively super crisp on the outside they stayed that way even after they cooled a bit. I ate my first one without the dipping sauce and loved it. After my third wing, I started to feel the cayenne and black pepper on my lips and I was glad to have the cool creamy sauce to reach for.

These wings couldn’t be simpler and they’ll fill your house with the most delicious aroma. I’m not a fan of wings covered in a sticky sauce, so I appreciated this version, which went with a simple rub of five-spice powder, cayenne, salt, and pepper. They crisped up beautifully in the oven, but I’m sure they’d be great cooked on the grill as well. The cilantro dipping sauce wasn’t very exciting on its own, but went beautifully with the wings. The one thing I would change is perhaps to up the amount of spice next time, especially the cayenne. I gave the sauce a few quick pulses with a hand blender to mix in the cilantro and called it done.

This is a simple and yummy recipe. I enjoy a crisp yet moist wing. I made two batches, one as the recipe calls for, with generous amounts of kosher salt and spices. The other batch I brined with salt and sugar for only an hour and a half. I have to say, brine makes chicken better. So if you have the time, brine the wings, pat dry, then season and bake! You will love it!

With or without the brine, it’s a good recipe, but for the super-moist chicken lover…brine it, baby! The cilantro sauce was good, I recommend making this first so all the flavors have a chance to marry.