“My family has made these schnecken for most every holiday for as long as I can remember,” explains Seattle chef Tom Douglas. “Schnecken, which means “snails” in German, are basically pecan cinnamon buns. Once the schnecken were turned out hot from the pan and the top of the buns covered with gooey pecan caramel, the real struggle began—fighting my seven siblings for first crack at our favorite piece. It might have been the first time I realized that my rotundness and arm length gave me a distinct advantage over my sisters as I groped for the warm center of this classic pull-apart bun with cinnamon. After the center pieces were gone, I went for the ultra-caramelized golden brown corners.” We suspect you’ll be fighting for these as well given how tender and fluffy the buns, how ooey and gooey the caramel coating, and how decidedly and devilishly decadent the resulting schnecken or, if you will sticky buns. Trust us when we say you may just be surprised at how your loved ones lose a little of their decorum when going after these. And it’d be understandable.–Renee Schettler

When The Schnecken Beckons… 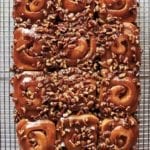 These schnecken, or pecan cinnamon buns or sticky buns, are ooey and gooey with caramel and chopped pecans. They've been in my family for years and I still make them to this day.
Prep 20 mins
Cook 40 mins
Resting Time 3 hrs
Total 4 hrs
Breakfast
German
12 to 14 schnecken
563 kcal
5 / 9 votes
Print Recipe 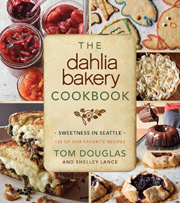 For the pecan topping

For the cinnamon sugar filling

I make cinnamon buns quite often in my house, but never with the sugary pecan topping, so I thought I’d make these schnecken (pecan cinnamon buns). That, and the fact that I’ve been waiting for the opportunity to say, “When the schnecken beckons.” The dough is absolutely beautiful. It’s soft and supple and bakes up fluffy and rich. The topping comes together with ease and clings perfectly to the buns when they’re unmolded.

As the recipe suggested, I made the buns and the topping, assembled them all in the pan, and left it in the fridge overnight. The next morning I let it proof on the counter while the oven preheated and with barely any effort we had beautiful, fresh sticky buns.

These are so far superior to anything one could buy. They’re well worth the effort.

These pecan cinnamon buns, as with any yeast product, do require a certain investment of time. However, a lot of that is hands-off time, and if you’ve some experience working with dough, these come together quite easily in between bouts of resting and rising. The end result is *very* gooey and extraordinarily sweet—next time I might knock back the amount of pecan caramel, but that is just my own preference.

We served them warm with cream and ate them with a spoon, which sidelined the problem (benefit?) of getting covered in caramel. This is down to your own discretion.

The next time I make these schnecken, I’m going to try and get some apple in there somewhere—maybe slices in between the rolls, or maybe grated and pressed dry and then rolled right up inside.

At my house, we all love cinnamon buns. Who doesn’t? This recipe for schnecken (pecan cinnamon buns) is another delicious addition to my repertoire. Decidedly buttery, almost brioche-like, the schnecken were as tender as could be, yet rich and substantial enough to hold up to the gooey caramel.

The only slight issue is that they’re best eaten warm, as the caramel got just a little too firm when the schnecken cooled to room temperature. I find that is a common problem with sticky buns; rewarming the schnecken softened it up again. All the neighbors were delighted to taste test this recipe for me. Everyone gave it a thumbs up.

The schnecken beckoned at my house yesterday. It was my mom’s 90th birthday and although most would love a cake filled with frosting, her favorite is a pecan cinnamon bun. These didn’t disappoint.

Everything about this recipe was spot on. I prepared the dough the evening before using instant yeast and my Kitchen Aid for kneading the dough. I left it in the fridge overnight and served them warm for dessert at dinner the following day. The aroma in my house was intoxicating and the results were Instagram-worthy and incredibly delicious.

They came out of the pan perfectly with all of their sticky goodness intact. Twelve hours later, they didn’t have that “right out of the oven taste” as they had when I first served them, but they were still soft and incredible. I stored them overnight wrapped in parchment and then a layer of foil. These appear more challenging to make than they actually are and should be tried by anyone who loves this type of sweet…be forewarned…they serve a crowd!