Most of us eat turkey only once or twice a year—at Thanksgiving and possibly at Christmas. However, once you taste smoked turkey prepared in your own smoker, you may find yourself wanting it a little more often. There’s just one potential downside. Ever notice that smoking turkey tends to produce rubbery skin that is pretty much inedible? Poultry skin needs high heat to get crispy, but low and slow is where the flavor happens, so you have to find a balance between those two worlds. To crisp the skin on your turkey, see the variation that follows the recipe.–Jeff Phillips

LC Get Lit On Thanksgiving Note

If the lure of a phenomenally tasty turkey isn’t sufficient to convince you to smoke your turkey this Thanksgiving, there’s another darn good reason: More oven space. Think for a moment how lovely that would be come Thanksgiving. And there’s no need to invest in a smoker, seeing as you can jury-rig your grill for smoking. (We’ve included all the basic information you need to know in the recipe below, although if we were you, we’d get us a copy of Smoking Meat, the encyclopedic compendium of smoking know-how written by Jeff Phillips from which this recipe is taken.) Actually, there’s a third reason, too. Smoking in the backyard gives you a legitimate need to excuse yourself from your mother-in-law’s clutches and go outside to get lit on Thanksgiving. We mean, to go outside and get the fire in your smoker lit. Uh, yeah, that’s what we meant. 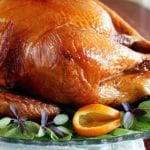 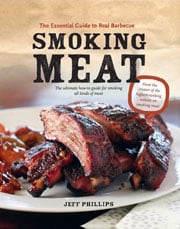 For a turkey with crisp skin, smoke it until the internal temperature of the bird reaches 145°F. Transfer the bird to a hot grill preheated to 350° to 375°F and finish it off until the temperature bumps up to 165°F. (You can instead smoke the bird the whole time at 275°F to 300°F, but the cooking time will be much shorter than what is stated in the above recipe. This method really cuts down on the time a bird spends in the smoker, and for me that translates to cutting flavor. But if you’re curious—or short on time—you should try the various approaches to determine which works best for you.)

This smoked turkey isn’t only easy to make, it wows a crowd like nothing else. I own a Big Green Egg and cooked the turkey in that. It was a little difficult to keep the temperature below 240°F (116°C); I think I put too much lump charcoal in the grill/smoker. So be careful of that. You really don’t need that much coal if you’re cooking at such a low temperature, as the coals won’t burn up as fast. I followed the recipe as written, using only salt, pepper, and olive oil for seasoning. Next time, I’d bump up the flavor a bit and add some herbs, lemon zest, etc. The turkey was a bit bland, but the smokiness of the meat thrills people. Also, the cooking time is way off. It only took 2 hours and 45 minutes to cook my 14-pound bird. [The recipe says to cook a 12-pounder for 6 hours, but I took my turkey off when the thickest part of the breast meat reached 150°F (66°C), not the 160°F to 170°F (71°C to 77°C) others recommended. The meat continues cooking while resting and is perfectly cooked through and moist.] Not your normal dry turkey. Try it—you’ll like it!

What can I say about this magnificent bird? I don’t have a smoker or charcoal grill so I made 3 wood-chip packets for the gas grill. Keeping only 2 burners out of 5 on, I placed 1 packet over the live burners to create the smoke. The temperature inside stayed between 250°F (121°C) and 300°F (149°C) for cooking, as I fiddled with the positions of the burner knobs between half and fully on. Cooking time was about 4 1/2 hours for a 12-pound turkey. Instead of brining the bird (I forgot), I injected it with a light marinade and dried it off again. I used cherry wood chips to smoke it with and used almost all of the 3 smoke packs. The end result was a golden bird with crisp skin and a light smoky flavor. The bird was magnificent to look at and delicious to eat. Because of the injected marinade the meat was juicy and tender. I think brining/injecting a marinade into the meat is essential to keep it moist. In short, this was the best turkey I’ve made in a few years. I’d certainly be happy to do this again.