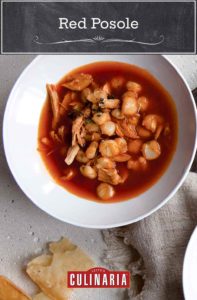 Chicken posole is a source of tremendous pride for Mexican home cooks. And, as you can imagine, there are as many recipes for this classic as there are families. This recipe makes a big batch and tastes even better when reheated, making it swell for feeding the family for a couple days or for entertaining a small crowd.

The word pozole (pronounced po-so-LAY if in Mexico, po-SOL if in Central America, hence the interchangeable use of the word “posole”) comes from Nahuatl and means “foam,” explains author Pati Jinich. The hominy expands while it cooks and opens in such a way that it appears to bloom—and in so doing it forms some foam on the surface of the cooking liquid. “That’s how you know when it’s ready,” explains Jinich. We could’ve sworn it means “make a big batch of this on the weekend and reheat during the week after soccer practice.”–David Leite

What’s the difference between posole and hominy?

Sometimes these words are used interchangeably but they’re not really the same thing. If you want to get food nerdy about it—and you know we do—then here’s a handy definition for you. Hominy is the corn kernels that’s been soaked in lye water to remove the hulls, which allows them to swell to outsized proportions. When you take those big ole kernels of hominy and add them to a pot of brothy chicken, and chiles, you get, in this, red chicken pozole. And when you’ve got posole, what else could you ask for? 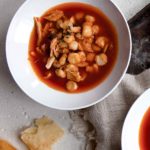 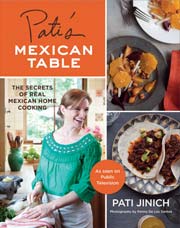 For the chicken posole base

For the chile purée

Make the posole base

Oh, this red chicken posole recipe was so very delicious.

Although not difficult to prepare by any means, it does take time to cook each component before the final assembly, so it’s best left for a weekend dinner. You can find junctures where components can be made in advance and stored, as when the meat is shredded and the hominy is boiled. The chile pureé can also certainly be made ahead of time and stored in the fridge.

I halved the recipe and didn’t encounter any issues. I used canned hominy, which was fine, although you do need to be careful about the accuracy of your final simmering time—you don’t want to overcook the corn.

It reheated beautifully the next day for a quick office lunch. I’d never had the red version before, and I think it’s my new favorite.

Pozole is a standard in our home, where I make it at least once every 2 or 3 months. But I’d always made the white version. Time to try out something different. In the end, the two posoles are identical except for the chile sauce in the red version. The chile added a somewhat earthen flavor to the dish. I’ll make this recipe again.

I didn’t use dried hominy but opted for canned instead. I’ve used dried hominy before but I didn’t think the taste was that much different. As accompaniments, I used most of the things mentioned in the recipe, but I added diced avocado and minced cilantro on top of the refried beans.

There seemed to be a lot of ingredients and steps to making this red chicken pozole recipe, but all in all, it was just chicken, chiles, and hominy. This very simple combination ended up tasting complex and delicious. It had just a hint of heat, and while the hominy and chicken were soft, the addition of the crunchy accompaniments made for a tasty dish. I’ll definitely make this again and combine the chicken with the pork.

I used canned hominy but wonder how cooking the dried hominy with a head of garlic would have changed the flavor. Also, there was a lot of broth left after poaching the chicken, and not having made this before, I had to guess how much liquid I should put in.

I finally got to use the dried chiles I’ve been hoarding, so there was no problem getting both the ancho and guajillo.

With this red chicken pozole recipe, you have the potential for a fantastic meal, made hearty from the hominy, chicken and chiles, with bright, fresh tastes and textures from the lettuce, radish, and lime.

I used dried hominy and it really does add a richer flavor. And you’ll have the cooking liquid from the hominy to use as part of your broth for the final stew. The name the author gives for the appropriate dried hominy to buy, maíz mote pelado, is correct. “Pelado” is the operative word, which means that the skins have been removed. This is corn that has been treated with slaked lime (cal), had the skins rubbed off, then dried again.

The recipe is a bit vague on quantities, especially liquids. I cooked the hominy in a 5-quart pot with 10 cups of water. This was less than 4 inches above the hominy, as the recipe specified, but it was plenty. After the hominy was cooked, which took about 3 hours, rather than 4, it left me with 1 quart of cooking liquid. The instruction not to add salt is an old wives’ tale, just like the old saw about not adding salt to beans. I added the 2 teaspoons salt as called for from the get-go. I added another teaspoon later in the cooking, so 1 tablespoon turned out to be the right amount.

For the chicken, I used a single 5 1/2-pound chicken, cut up, in a 4 1/2-quart pot with enough water to just barely cover it. Once again, not as much water as the recipe called for. After the chicken was cooked, cooled, and shredded, I still had almost 1 quart of extremely rich (gelatinous) stock, which was more than enough for this recipe.

For the chile paste, I processed mine in a Vitamix, which made it very smooth, so I omitted the step of passing through a sieve. If you use a regular blender, you may want to take the trouble. For the garnishes, I used Tajin for the chile powder, which is a seasoning that combines dried chiles, lime, and salt. It’s neat stuff to have around for putting on grilled corn. If you don’t use this, you’ll need more lime and some extra salt.

The fresh vegetables should be placed generously on top of the chicken posole, and offer a nice cool, crunchy contrast to the hot soup.