This maple glazed turkey is paleo friendly and gluten free and crowd pleasing and easy to make and, as if that’s not enough, magnificent in taste.

We understand that it can be tricky for you home cooks cooking for others on Thanksgiving. And not just because of the obvious stovetop and oven acrobatics. There are guests, God love ’em, who can’t tolerate—for whatever reason—gluten, dairy, processed carbs of any sort, and so on. And for that reason, we’re unspeakably grateful for this simple maple glazed turkey recipe, which is gluten-free, dairy-free, paleo-friendly, and, as if that’s not enough, easy-to-make. It also tastes magnificent. Be warned, it ditches gravy for a simple yet spectacular pan sauce with a touch of citrus and just the right amount of sweet. Talk about a darn good reason to give thanks.–Renee Schettler Rossi 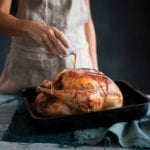 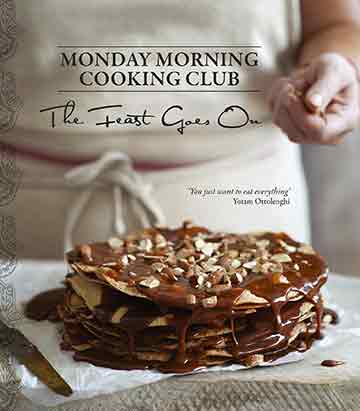 Thanksgiving, here we come! Orange and maple glazed turkey—a dream come true. And yes, it did come true. Those flavors meld together to give you a smooth, harmonic note that makes this maple glazed turkey much better than usual. There are no hidden tricks here—just plain, everyday kitchen skills that we all possess.

Almost all of the ingredients were already in my kitchen, I just had to go out and round up a turkey! Our turkey was a bit on the heavy side, but stylishly so, weighing in at just a bit over 13 pounds. That made for some time adjustments, but not enough to have anyone throw in the towel.

All in all, a great, moist, citrus-y, maple-y turkey with an after-kick of garlic that was subtle and pleasing.

Let me start by saying I had to use a much bigger turkey than called for in this recipe as we were hosting Thanksgiving dinner this year for 18 people. I used 2 apples and 2 oranges and doubled the ingredients for the glaze. Hands-on time to prep the turkey was 30 minutes. I had a 30-pound turkey and rubbed it first with the olive oil and then with the garlic and orange zest. I then gave it a generous sprinkling of salt all over. I put the peeled apples in the cavity and tied it up. We roasted it in a 400°F degree oven for 60 minutes and then poured on the cup of glaze, covered it with foil, and roasted it for 5 hours and 30 minutes until it registered 150°F on a meat thermometer. The last 20 minutes it was uncovered.

The bird was a deep mahogany color with crisp skin, and the juices ran clear. When I poured the pan juices into a saucepan, I did have to skim off the extra fat, but there was no scum. I reduced the remaining glaze and pan juices until syrupy, which took 15 minutes. After the maple glazed turkey rested for 30 minutes, we carved the bird, and the meat was tender and juicy, and the skin was slightly sweet, but there was barely a hint of citrus. We served the extra glaze on the side for those who wanted it. The maple and citrus flavors were a little stronger in the glaze. I would have zested the oranges, minced the garlic, and mixed those together with the salt to rub on the turkey before roasting. I think this would have made the citrus and garlic notes a little more pronounced. While they appreciated the glaze, I was asked repeatedly where the gravy was. I had to quickly make some while the turkey was being passed around.