This leftover pasta frittata makes terrific use of last night’s spaghetti leftovers—with sauce or without sauce—along with the easy additions of eggs and Parmesan cheese.

To create a leftover pasta frittata, start by warming last night’s puttanesca, pesto, primavera, or any other sauced pasta in a skillet with a couple tablespoons water. Or go with unsauced spaghetti for a crisper effect. Having the filling hot when it’s mixed with the eggs helps with the flipping step by sort of cooking the frittata from the inside and avoiding overbrowning the bottom before the center is set. To avoid unappealingly dry overfluff, I cook frittatas on the stovetop and never in the oven. It’s a little trickier, but it keeps the texture right and the flavor factor high.

[Editor’s Note: We know a lot of you are sorta scared of the dreaded frittata flip. And we can understand that. But we’re here to assure you that you can let that fear go. The directions in the leftover pasta frittata recipe below should see you through the moment with ease and perhaps even grace. As one of our recipe testers said, “It is a nervous minute or two when flipping the frittata, but it does become easier with practice, and it makes for a dramatic presentation if you happen to have an audience in the kitchen when you’re preparing it.” And if for some reason, despite your and our best efforts, the flip still flops, so what? Just nudge it back together as best you can, finish cooking it, plop it on some plates, and grab your forks. It may look like a jumble, but it’ll still taste spectacular.]–Cal Peternell

*Can I Use My Cast Iron Skillet For This Recipe?

Yes, Dorothy, you can use a well-seasoned cast-iron skillet in place of nonstick in most instances. Including here. The trick is that it really does need to be pretty slick from use. We’ve made this pasta frittata countless times in our cast-iron skillet, though we have heard from folks who had a tricky time with the frittata releasing. You simply want to make certain the skillet has no rough patches and you may want to use just a smidgen more oil for effortless flipping and nonsticking. 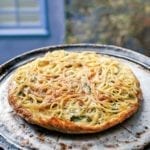 This mashup of pasta and frittata combines some of my favorite comfort foods for a rich, cheesy, inexpensive pantry meal. And the variations are endless, too.
Prep 5 mins
Cook 20 mins
Total 25 mins
Mains
American
4 servings
301 kcal
4.70 / 10 votes
Print Recipe

Herbed Frittata Omit the spaghetti. Whisk chopped fresh herbs, such as parsley, basil, chives, mint, or tarragon, into the egg mixture along with the cheese, oil, salt, and pepper. Alternatively, boiled green vegetables, such as green beans or sweet peas or asparagus cut into 1-inch pieces, work well when added to the eggs once in the skillet. Or add little bits of ricotta or goat cheese, which should be dabbed into the eggs once they’re in the skillet. But everyone’s favorite at our house is the original leftover pasta frittata.

Remember that part in The Breakfast Club, when Claire pulls out her perfectly appointed sushi lunch and Bender gives her a hard time about it? That’s exactly what happened when I slid this frittata onto a cutting board. I had used roughly half a batch of Spaghetti all’Amatriciana, so it had a funny pinkish tint to it. Plus being an odd juxtaposition of breakfast and dinner probably didn’t help matters much. But it was delicious!

I was worried about this recipe since it doesn’t call for an exact amount of spaghetti, but now I see that it really doesn’t matter. It just works! I omitted the salt and pepper since my leftovers were already well seasoned. My frittata served 4 since I used quite a bit of pasta, but yield may vary depending on how much leftover pasta you’ve got. Mine was rather ugly since flipping the frittata wasn’t so easy. I used a large nonstick skillet, which I didn’t realize was so heavy when it was full! It would have been much easier to bake the frittata, but cooking it on the stovetop did yield a fluffy, flavorful result.

I think that this frittata is probably my favorite egg dish next to simple soft-boiled eggs. There’s something elegant about the melding of all the ingredients and the dramatic flipping of the dish that speaks to me. In truth, it’s a simple dish that’s easy to prepare and delicious for breakfast, lunch, or dinner.

I used fresh spinach, pecorino romano cheese, and a few scallions sliced very finely. As the pan heated with a little olive oil and butter, I washed and chopped the spinach, including the stems, before adding it to the pan. When the spinach had wilted, I added a few grates of nutmeg, some salt and pepper, and some of the sliced scallions and stirred before adding the egg and cheese mixture. It is a nervous minute or two when flipping the frittata, but it does become easier with practice, and it makes for a dramatic presentation if you happen to have an audience in the kitchen when you’re preparing it. I added another pat of butter to the pan and slid the frittata back into the pan.

I found that this recipe served 2 as a light dinner with a salad, garnished with the remaining sliced scallion. This left 2 servings for lunch the next day, and the frittata was just as good as the first day. I did make this recipe a second time later in the week and used chopped mushrooms, crumbled bacon, Cheddar, and chives in the filling. Definitely a recipe for everyone’s repertoire.

I rarely make the same recipe twice in a week, but sometimes I just have to try a variation of the original. This is just one of those easy recipes that you can see what you have on hand, follow the basic plan, and create something delicious very quickly that your family will love! When you find a recipe like this that is just so easy to personalize, it is a treasure.

I made this early in the week using leftover angel hair pasta and my three-meat pasta sauce. Not knowing how much pasta to add, I wondered if I had added too much, as it easily covered the bottom of my 10-inch cast iron skillet. I also worried that the pasta had too much meat sauce, but this turned out to be a very good thing. I followed the recipe pretty closely but added closer to 1/2 cup cheese. The flipping process was easier than expected, and after 14 minutes, I felt the bottom was crisp enough to flip the frittata. Instead of using a plate (my plates are not as flat enough to accommodate this), I used a small cutting board. My frittata came out with ease and slid back in with ease. I let it brown well on both sides, yielding a lovely golden color with a few darker edges.

The extra sauce is really what gave the frittata great flavor. When asking my tasters for feedback, they all agreed it was great. The crispy pasta edges were key. They also loved how meaty the frittata was, the only thing they would change would be to add more cheese. Personally I kept wondering if this would work with seafood or just veggies.

A few days later, I did something crazy. I had the base made for a spicy baked crab dip that we no longer needed. It wasn’t baked yet, and not wanting to waste the mixture, I decided this may be good in the frittata. I made some angel hair pasta, added the egg mixture, and tossed in the crab mixture. I followed the same technique as before, letting the edges brown. Once again, the frittata a huge hit with all.

I think an all-veggie version would also be amazing, with onions, fresh tomato, mushrooms, summer squash. Or a jambalaya version with andouille sausage…so many options! I even wondered if this could be made in individual pancake sizes?  You may lose some of the coveted brown edges, but I still may have to try this.

I must admit that I was a little nervous about the flipping step of this frittata recipe. I’ve always cheated when making a frittata by finishing it under the broiler. The flipping method seems to avoid overcooking on either the top or the bottom and gives it a very nice “filling” without a crust of overdone egg on the outside. I made this with leftover spaghetti and a simple tomato basil sauce.

I used two 9-inch skillets to work better with the size of my plates. This only took about 8 minutes to put together and a total of 22 minutes from the start until I plated it to cool. I tried a wedge when it was first plated and then waited about 30 minutes to try the next wedge, and finally left it on the countertop for a couple of hours before trying it again. I think that letting it sit a little longer improves the frittata a great deal.

This is the perfect dish to add to a variety of small plates at a wine tasting or cocktail party. I like the idea of using fresh herbs and other cheeses. A great combination for egg and pasta lovers!

I love frittatas and this is a nice stovetop recipe. I usually use the oven method, but this stovetop version actually turned out great. I halved the recipe and used the ingredients I had on hand—fresh parsley and freshly grated Parmigiano Reggiano. I used a well-seasoned cast-iron skillet and actually flipped the frittata with a spatula since I could tell it wasn’t sticking at all.