This Welsh rarebit grilled cheese is a grown-up take on our favorite gooey, melty open-face sandwich. It’s made with mustard, ale, and sharp Cheddar and comes together oh so smoothly.

This Welsh rarebit grilled cheese sandwich is an indulgent riff on the classic British Welsh rarebit, which is a frugal yet insanely satiating open-face sandwich of sorts made with a thick, mustardy Cheddar cheese sauce spiked with mustard and ale. This sorta begs the question, how does it work to try to sandwich runny cheese sauce and expect to flip it in a skillet? As one of our testers explained, it’s sorta like “sandwiched fondue.” Or, in another’s words, it’s “a delicious but seriously gooey hot mess in a good, eat-at-home sort of way.” Which, quite frankly, seems marvelous to us. And if you’re a sucker for what happens when cheese oozes out of a sandwich and crisps in a hot skillet, this sandwich is most undeniably for you. As for those Brits who consider this grilled cheese rendition treasonous, well, it wouldn’t be the first time we did something like that and not had any remorse, would it?–Renee Schettler Rossi 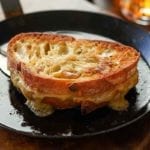 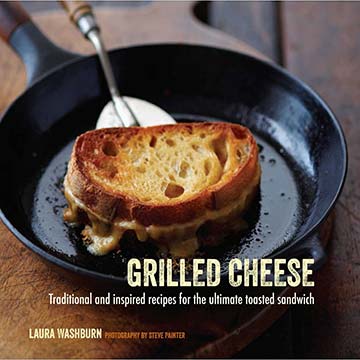 For a more classic Welsh rarebit, make the cheese sauce as directed. Omit the whole notion of making grilled cheese and instead generously slather the cheese sauce over a slice of toast and run it under the broiler until bubbly. Serve with a knife and fork.

This Welsh rarebit grilled cheese is a more decadent, flavorful, and sophisticated version of a simple grilled cheese sandwich. Having recently spent some time in London, I can say that this sandwich is distinctively British but takes the familiar form of a grilled cheese sandwich. The ale and ground mustard give the cheese spread a more heightened, upscale flavor, and the Worcestershire sauce adds depth and savoriness.

After adding the cheese, the sauce almost gets slippery at the bottom of the pan while trying to mix in and melt the cheese. The cheese sauce had a nice consistency, and I was surprised that the sauce didn’t ooze out of the sandwich while cooking. The recipe does make quite a bit of sauce, easily making 2 good-size sandwiches or even 3 smaller ones. I didn’t get much heat, but rather more of an essence, from the good pinch of cayenne pepper I added.

This is a delicious sandwich that will satisfy any grilled cheese lover. Serve it with creamy tomato soup or a peppery arugula salad and you’ll have a very satisfying lunch or light dinner. Add an ice-cold hard cider, and you’ll have a meal worthy of any London pub.

Once I saw this recipe, I knew it would be my reward for shoveling the 4 feet of snow blocking my sidewalk and path. It’s the quintessential cold-weather food and brings so much more flavor to the table than your typical grilled cheese sandwich.

The mustard powder, beer, and Worcestershire sauce add such a great punch to the filling. It took about 20 minutes from the start of prep to grilling the sandwiches, making this a very weeknight- and lunchtime-friendly dish, and I certainly recommend this to anyone coming in out of the cold. The sauce came together quickly, and the roux smoothed out and thickened very quickly once the beer was added. Keeping the heat on low, I was able to slowly melt the cheese into the sauce until it was silky and smooth.

I used Belhaven Wee Heavy, a strong, malty Scottish beer, as my ale, and it was well-suited to this preparation. I used Cabot Seriously Sharp Cheddar.

Starting the sandwich off in a cold pan worked just fine, as it allowed everything to slowly heat through rather than just crisping the outside very quickly with the inside remaining cold. Roughly 4 minutes on the first side and 2 on the other is accurate.

The sauce is very runny, so beware a lot of oozing while cooking. I will say that the leaking sauce formed a delicious cheese crust once it cooked in the pan a little, if you’re into that kind of thing. I would recommend serving this sandwich with a crisp salad with a bright dressing. It’s nice to accompany it with some acid to cut through the richness of the sandwich. This is a RICH dish.

With the caveat that this recipe is messy, gooey, and lushly delicious in an evil way, I find that this version of melted cheese on bread had just enough flavor and gooeyness to quiet all conversation at the table, which is my gold standard.

Welsh rarebit is a pub, tearoom, or home-kitchen dish that I have been unable to resist for most of my double-digit years. Rarebit with a whole-grain or seeded bread, some sliced apples or chutney on the side, and a pot of tea, and I am transported to the creekside tearoom in rural Cumbria! This recipe almost gets me there. It is a delicious but seriously gooey hot mess, in a good, eat-at-home sort of way.

Because the cheesy sauce is already fully liquid, when you attempt to spoon it onto the prepared bread, it wants to run off the bread onto the pan. Because of that, you will probably realize, as we did, that there was enough cheese for at least 4 servings made this way. Don’t worry about the cheese running over the sides of the bread onto your skillet. Use a heavy one like cast-iron, and the cheese that melts on the pan will get crisp browned edges. Turning it over is a bit of a two-handed trick, with a spatula in one hand and maybe tongs in the other. This would work just as well with a traditional open-face plating over toasted bread if you have just made the sauce.

If you weren’t too greedy, put aside some sauce for the next day, toast your bread, and spread the very easy-to-handle chilled rarebit sauce so it completely covers the top of the toast. Then pop it under a broiler (about 5 inches away) just until it bubbles and starts to brown but not burn. Much less fuss and about as quick as turning on the broiler and slicing the bread! I used an ale that was about 5% alcohol by volume, close to a British ale, and even something nuttier or closer to a stout would work well—just make it something you want to drink since the recipe only calls for 1/2 cup. The method of putting the flour in right at the beginning before melting the butter and stirring it as it melts was a surprise, but I think it yielded a really nice sauce, quicker than a traditional béchamel.

The level of heat from the English mustard, Worcestershire sauce, and cayenne was just right, and I wouldn’t want to tart it up with any gimmicks. I used an aged, organic English Cheddar. While the sauce was pulling away from the sides of the pan quite quickly, I continued until every bit of cheese had melted. There was a bit of fat (maybe from the cheese and butter) that wanted to separate from the rest of the sauce, but I stirred it as best as I could before assembling the grilled sandwiches. I used a saucier pan with a rounded bottom, which made stirring with a silicone spatula easy. I made a ciabatta especially for this, but on the second day, I served the rarebit on a seeded wheat. Both were good, though I would give the gnarlier bread a slight edge since that is how I usually find it at a favorite mid-journey tearoom stop when we are visiting England. It is there that I noticed the clever trick of making the sauce ahead in large batches, and spreading it on the toasted bread to order, as needed, and broiled (or grilled, in Brit speak). This recipe made a lovely cheesy sauce that doesn’t need egg or cream (save that for Delia Smith’s rarebit soufflé).

I would gladly eat this sauce spooned over broccoli and cauliflower! Using a cold cast-iron skillet, I gave each side about 4 minutes. I did try it with a heated stainless-steel skillet on a second attempt but was not as happy with the result, and I think the cast-iron will work well on any heat source. I think the extra bread and butter might make this a more substantial (or excessive) meal, but the recipe would be just as satisfying served open-faced and broiled.

You can’t really go wrong with hot cheese on bread. This Welsh rarebit grilled cheese was just a slightly more complex and messy version of the grilled cheese most of us are used to. I served it to a cheese toastie-loving Brit, assuming he’d heard of Welsh rarebit before, but he hadn’t. Nonetheless, we found it to be rich, satisfying, and snowstorm-appropriate food, good with any manner of meaty, vegetal, and malty accompaniments.

Take heed, though: If you tell your eaters you’re making grilled cheese, you should enlighten them about the texture beforehand, which is more like a sandwiched fondue. Since I only shared the recipe’s name with my crowd, the gooeyness of a classic grilled cheese was expected and thus missed. Take caution when pouring the sauce onto the bread, too, as this recipe makes quite a lot, and it’ll run right off the slices and make for messy flipping if overfilled. Of course, at worst, that just results in charred, crusty bits of cheese to snack on as you wait. The cheese is so oozy that you really can’t pile on too much or it spills out the sides and burns. The mustard really comes through, almost overwhelmingly so. My tasters and I love mustard, so it wasn’t offputting, but you may want to add it to taste or crank up the cayenne and Worcestershire.

The most Irish members of the family—my husband and my younger daughter—LOVED this Welsh rarebit grilled cheese sandwich recipe. My older daughter and I also liked it, yet we are still partial to the Three-Cheese Grilled Cheese. This recipe takes a little longer to make.

I used both gluten-free and regular ciabatta breads, and I made the Welsh rarebit sauce with gluten-free all-purpose flour. After adding the ale, it took a good 6 minutes to thicken the sauce. Once the cheese and other ingredients were added, it took about 3 minutes for everything to be nicely integrated. In my mind, the sauce could have been a tad thicker. Once we started sautéing the sandwiches, the timing was perfect. Some of the sauce came out of the bread but not so much that it became a problem.

The result was a very heavy and filling yet tasty grilled cheese. The ale taste was pretty prominent. One sandwich is more than enough per person. I ended up with quite a bit of leftover sauce, which I used the next day on pasta.

From assembling the ingredients to sitting down at the table, this Welsh rarebit grilled cheese sandwich recipe was ready in less than 15 minutes. The flavor is wonderful—strong Cheddar, mustard, and ale. We poured the sauce over sourdough bread and served the same ale we put into the rarebit to drink. YUM.

We didn’t use up even half the sauce for 1 sandwich, as it would have been too much for each of us. We had a bit left over, which we served over steamed broccoli the next day. This is a super snack or could be a meal with a crisp salad.