These refrigerator sweet pickles are an easy homemade Scandinavian-style pickle. Simple to toss together, sweet as can be, and crisp as your favorite pickles from childhood. And there’s no hot-processing canning required as these simply stay in the fridge. (aka refrigerator pickles*). So simple they don’t even require turning on the stove. 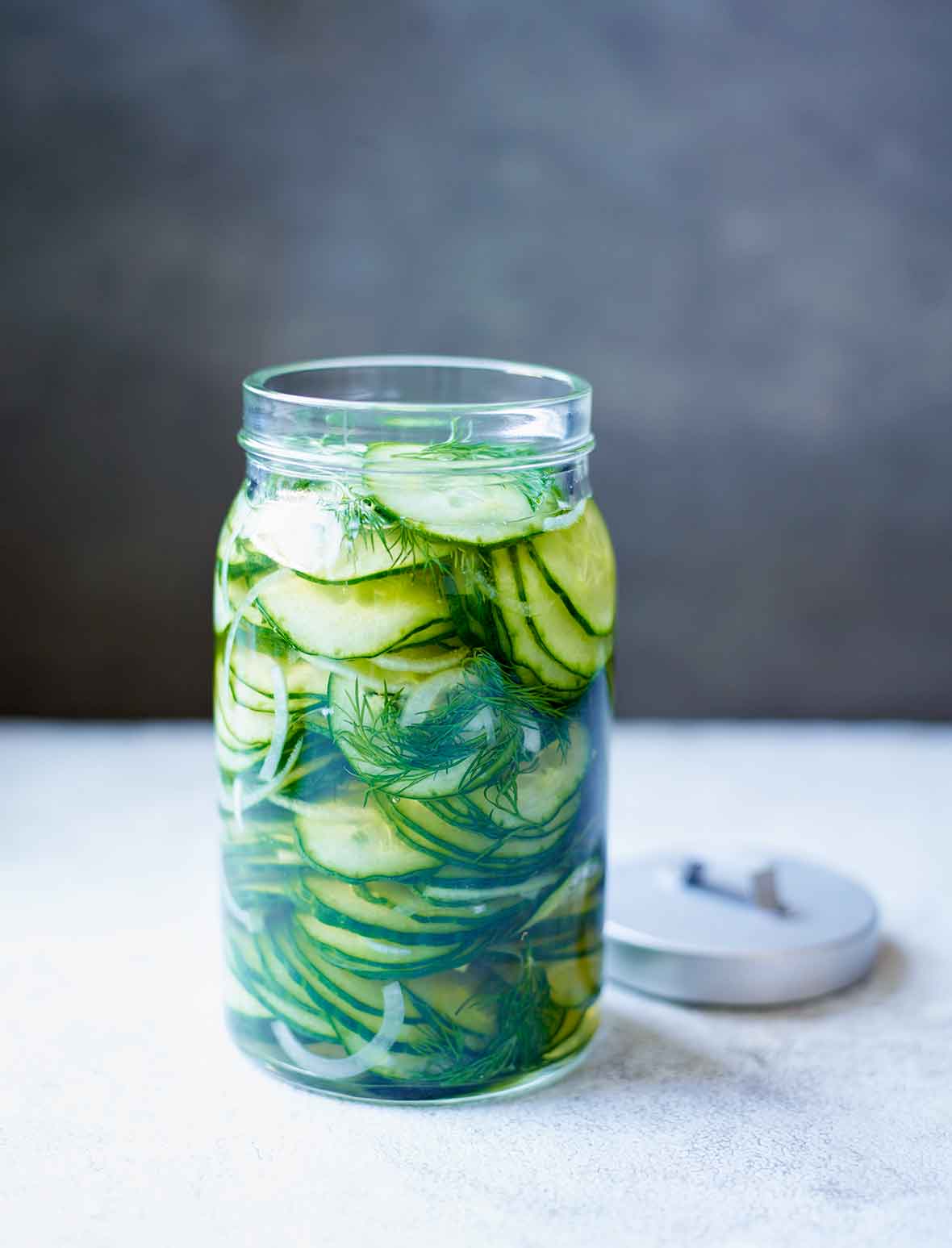 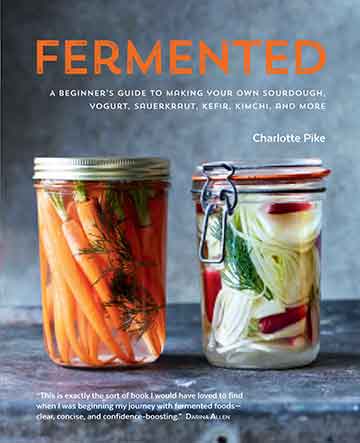 Thinly slice the cucumbers, using a mandolin or handheld slicer if you have one.
Layer the cucumbers, onion, and dill in the jar(s).
If you’re a laid back sort of home cook, simply pour the vinegar, sugar, and salt into the jar(s), screw on the lid, and shake well until the sugar begins to dissolve. It won’t completely dissolve and that’s okay. If you’re a sorta precise, take-no-chances sort of home cook, stir together the sugar, vinegar, and salt in a large measuring glass or bowl until the sugar begins to dissolve. It won’t completely dissolve and that’s okay. Pour the mixture into the jar(s) and screw on the lid.
Stash the jar(s) of pickles in the fridge for up to 1 month—but we bet they won’t last nearly that long. You can try them as soon as 6 hours if you’re the impatient sort although the longer the pickles remain in the fridge, the more intense the flavor.
☞ Tester tip: We found around 3 or 5 days to be the optimal waiting period before diving into your jar of pickles. By this time the dill will have mellowed, the sweetness remains noticeable, and the crunch remains pronounced. Originally published September 1, 2016.
Print Recipe

*What Are Refrigerator Pickles?

This is just the kind of simple, delicious pickle I like to have on hand to serve with drinks, a hamburger, or even a nice piece of grilled salmon. This recipe is particularly great because you don't even need to turn on the stove! Sweet, sour, dilly, but still mild, these are extremely versatile and I can imagine using them to dress up many dishes.

I made a half recipe because there's just me (although my guest loved them). I prefer Kirby cucumbers for pickling, and the ones I purchased were quite large. I mixed the brine in a small pitcher till the sugar and salt was dissolved. I layered the cucumbers, onion, and dill in the jar and poured the brine over, tapping the jar several times on the counter to get rid of any air pockets. I tested mine after 2 and 4 days and they were tasty, but I found that at 5 days they really had developed a full flavor.

The 3 cukes I used (1 medium hothouse and 2 small pickling from CSA) resulted in 4 cups very thinly sliced pieces. Since you don't heat the pickling liquid, it takes a while for the sugar to dissolve. I mixed the ingredients for the liquid together, stirred, and left it on the counter while I was at work as opposed to trying to vigorously stirred it in the jar jam-packed with cucumbers and onions. I used half a large sweet onion. Everything barely fit in the quart jar. Once everything was combined in the jar, there was very little wiggle room. In the future I would mix together the onion and cuke separately, pack it into jars, pour the prepared liquid over the top, tap out any air bubbles, and not even bother with trying to stir as its messy and awkward.

This only took about 15 minutes of prep time, some time to dissolve the sugar, and I waited about 3 days before giving them a try. They're very yummy—a bit sweet for my taste. I might take down the sugar amounts next time, but the dill adds a nice herbal note that keeps these bright.

These refrigerator pickles are lightly flavored with dill, a little sweet, a little sour, and totally delicious. Thinly sliced on a mandoline, they became crisp and flavored on the first day. I used a 1/2-gallon jar which was filled to the top and added the vinegar, sugar, and salt last. Gave it a few shakes and popped it into the fridge. I would give them 6 hours. They have been tasty since the first day and each day since (which was 3 days ago). So easy! I will be making these again.

It was surprisingly not awkward to put everything in the jar. I did not attempt to "stir" the mixture. I layered the cukes, dill, and onion, repeating this 5 times. I used a canning funnel to pour in the vinegar. I added the salt on top and then I poured the sugar in about 1/3 cup increments, and gave it a shake. The sugar dissolved quickly. These would be nice on a small platter with sliced tomatoes around them. I would like to mention that for refrigerator pickles, I generally do not sterilize the jars. I wash them with soap and hot water. It can't hurt, but IMO it makes a quick recipe not so quick. (For regular canning, of course, I would sterilize the jars.)

A tasty version of pickled cucumbers that was sweeter than my normal routine but a unique and welcomed addition to our pickle collection! This is the definitely the time of year to stock up on canning jars. Cucumbers are one of those veggies that are irresistible when fresh and irresistible when pickled. I was drawn to this specific cucumber pickle recipe because of the thinly sliced cucumbers. I've done spears, stackers, and regular round cucumber pickles in the past, but never thinly sliced cucumbers like this.

The amount of sugar in the recipe in proportion to salt was larger than I normally use, but I think for an end use with smoked fish, pates, etc., the sweetness of the pickles pairs very nicely. I liked the idea of thinly sliced onions in here as well--they add a nice peppery tang. So far, I have just tasted these thinly sliced cukes on their own, but am excited to buy some pate or make chicken liver mousse and serve these as a condiment along with some grainy mustard. Or on a smoked salmon bagel with herbed cream cheese and capers.

I actually stirred everything together in a mixing bowl before placing the contents in the quart-sized jar and it was filled to the brim.

This Scandinavian-style pickle is delectable, fragrant, sweet, and tangy all at the same time. I can see how it can be paired with almost anything!

Given the amount of sugar required for this recipe, it was extremely awkward to try to dissolve the sugar in the quart-size jar with everything else. I'd recommend boiling the sugar and vinegar on the stove top first, which would also help with the pickling process. The ingredient amount provided a full quart, with a bit leftover in terms of the pickling juice.

All I can say about this particular style of pickles is, move over hamburger dill, cause there's a new guy in town. I grew up in an Italian neighborhood with garlic pickles in a barrel and have grown fond of them. I love pickles of all kinds. I have had homemade pickles in so many variations but nothing like this one. I'm not sure what the differences are but it may be the sugar, cause all others are pickle spices, or the cooking down. One thing for sure is these are incredible, at least to me.

As written, these are sliced, so use on burgers for a change and on sandwiches, or if you want eat a bunch plain. They can work in salads or whatever. Not too sweet and not too tart. Don't see myself buying pickles ever again, especially the chips for burgers. These went over very well with my tasters and friends that I have to make more. Doing some spears as well along with the others for some variety. Kirby cucumbers are also known as pickling cucumbers and can be found in most supermarkets as well as WM.

Try it I promise you won't be disappointed. I have no comments or notes to add because this recipe is just right. Well, one thing. If you want more heat, then add some red pepper flakes at your own risk.