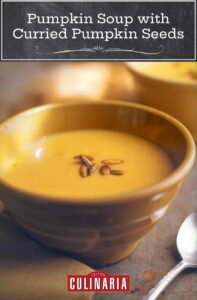 Whenever we walk into our pumpkin patch, we feel like we’ve stepped into Alice’s Adventures in Wonderland. The giant leaves, prickly vines, and massive pumpkins always seem a bit unreal—especially in fall, when the pumpkins ripen and turn the garden bright orange. That’s when we feel Maine nights getting colder, and we start to crave hearty soups like this one.

WHAT PUMPKINS ARE THE BEST FOR SOUP?

Not all pumpkins will work in this lovely little recipe. Fortunately, none has ever changed drastically on us at the stroke of midnight as in Cinderella. Yet as the authors point out, most commercial pumpkins are grown for Halloween decorations and are too dry for cooking.

They suggest you frequent fall greenmarkets for “old-fashioned cooking varieties like Long Island cheese, a popular buff-colored American heirloom; Long Pie, an heirloom from northern Maine that looks like a giant zucchini; and Rouge Vif d’Etampes, the bright-orange French soup pumpkin.” Or, they say, you can substitute an equal weight of any large winter squash. Or if you’re into delayed gratification, look to seed catalogs, which carry these and many, many other varieties of pumpkins. 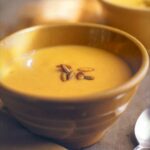 In France, pumpkin is used almost exclusively in soup, so it seems natural to combine it with those other classic French soup ingredients—potatoes and leeks. You can also serve this soup chilled as pumpkin vichyssoise.
Prep 45 mins
Cook 15 mins
Total 1 hr
Mains
American
6 servings
565 kcal
5 from 1 vote
Print Recipe 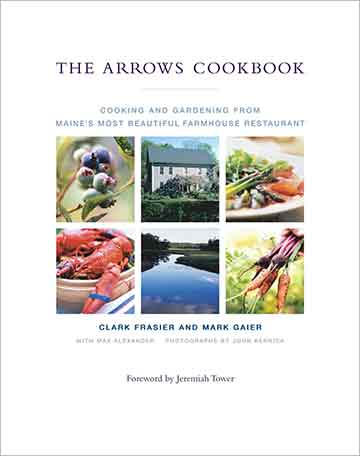 For the pumpkin seeds

This soup is delicious! The fresh pumpkin is slightly sweet and super creamy. I was concerned I wouldn’t like the pumpkin seeds, but I was mistaken; they were the perfect garnish for this silky soup. I didn’t have a 6 1/2-pound pumpkin on hand, so I used an 8-pounder that grew in our garden this summer. It took about 30 minutes longer to roast the fresh pumpkin. And it really is worth the effort to roast an actual pumpkin.

Cooking the leeks and potatoes went as written, and the blending of the soup was effortless. The seeds only took about 6 minutes or so to crisp up with the spices. The recipe makes a substantial amount of soup, but we managed to eat most of it. It’s a real treat. I only used 1/8 teaspoon cayenne, as I had young eaters. It was just the right amount of heat to bring some depth to the seeds. Also, I had a couple of cups of pumpkin leftover. It’ll be fabulous in pumpkin bread.

If you’re a pumpkin soup lover, this’ll appeal to you. The soup itself is very, very delicately flavored with leeks, and just the right amount of flavor and spice is brought in with the curried pumpkin seeds. I used the seeds of the pumpkin itself, washed, and dried.

After roasting the seeds in the pan with oil and spices I poured the whole mixture into the soup and stirred it. With every mouthful, I could really taste the sweetness of the pumpkin along with the hint of curry. A great way to add flavor to soups.