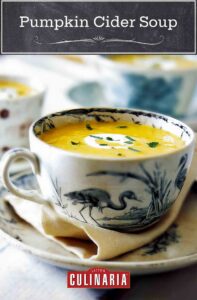 This pumpkin-cider soup gets freshness from tart apples and a good dose of crisp apple cider. Creamy and not too sweet, with an earthy boost from sage leaves, it’s the perfect soup for an autumn dinner. A drizzle of crème frâiche makes it irresistible.

This hearty autumnal soup pairs two of the season’s favorite ingredients, pumpkin and apples, although hubbard or butternut squash can easily serve as a substitute for the pumpkin. The cider adds a pleasant sweetness. Serve the pumpkin-cider soup as a starter for dinner or with a salad for lunch.–Margaret M. Johnson

The sweet tartness that the addition of Granny Smith apples and Irish cider lends to this soup, as well as the fact that the finished soup tastes “creamy, yet light” makes this cozy autumn soup a winner for our testers.

What kind of pumpkins are best for soup?

For soup, you’re going to want to seek out something that’s made for eating. The kind made for carving are grown specifically for looks and size; inside, those bad boys are watery and flavorless.

Edible pumpkins are mostly winter squashes so you can mix and match here. Hubbard or butternut squash would be excellent in this soup. The softer the flesh, the more watery it will be, so keep that in mind when choosing.

As far as pumpkins go, anything that’s sold for pies will also make a terrific soup–not too watery and with a lovely, sweet flavor. Sugar (also called sweet) pumpkins, Long Island Cheese pumpkins (so-called because they look like a wheel of cheese), and grey Kakai pumpkins are all excellent choices.

How can I make my own créme fraîche?

To make crème fraîche, combine 1 cup heavy cream with 1 tablespoon buttermilk in a glass jar. Stir to blend, then cover and let stand at room temperature for 12 to 24 hours, or until thickened. Refrigerate.

What should I serve with this soup?

Irish soda bread is a must, and a salad, like this beet salad with feta and pumpkin seeds would make it a complete meal. 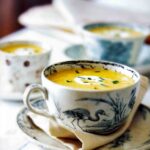 While apples might be best known as ingredients in crisps, crumbles, cakes, and tarts, they're a delicious way to sweeten up vegetable soups made with seasonal vegetables like butternut squash, pumpkins, and parsnips. Try this soup made with squash and apples and spiced with sage and thyme.
Prep 40 mins
Cook 1 hr
Total 1 hr 40 mins
Appetizers
Irish
10 servings
182 kcal
5 from 1 vote
Print Recipe 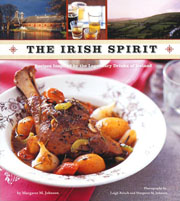 Tasty (and beautiful) soup! The tartness from the apples and cider is very subtle but definitely noticeable and we liked it very much—it sets this soup apart from the typical sweet pumpkin/squash soups. But like other pumpkin soups, this one is pretty straightforward to make, especially if you can purée the mixture right in the pot with an immersion blender.

The finished soup was a little looser than I would have liked, so next time I would add 3 cups of the broth, and wait to add the rest until after I purée the soup. And yes, it was great with brown soda bread on Leite’s website!

Now, about the crème frâiche, I tried to make it twice. My first batch didn’t thicken after 24 hours (the top had a somewhat thick and creamy layer but the rest was still watery). So I read up on homemade crème fraîche and discovered that there is more science to it than “add buttermilk and forget for 24 hours.”

I learned three things: regular pasteurized heavy cream is better than ultra-pasteurized, (which I used for the first batch; “too clean” for fermentation, some sources stated), and only loosely cover the jar (mine had the lid on tightly); and in a cooler environment, it could take longer than 24 hours for the cream to thicken (it’s winter, hence cooler room temp). I made the second batch with these pointers in mind. Well, after 48 hours I had gorgeous and delicious crème frâiche—was a wonderful addition to the soup.

I was drawn to this pumpkin soup recipe because of the inclusion of cider. While I wasn’t able to find Irish cider, I did find a very lovely Spanish cider called Isategi that has some characteristics of a sour beer. I used that in combination with butternut squash and Kerrygold butter. I appreciated the apple flavor that came through in the end product because of the combination of the cider and the Granny smiths.

I also liked that although this soup incorporates heavy cream, it isn’t too rich and still light. I’d like to try this with a more interesting squash than butternut next time. This is a good recipe to add to your soup repertoire.

I used a large veggie peeler to remove the skin to maximize the amount of ‘meat’ from one large squash. I used Crispin Browns Lane Cider, a classic English (non-Irish) Hard Cider made from bittersweet cider apples, which lent a perfect bitter yet sweet taste to the soup.

I used a large Dutch oven to start the soup and cooked the onions and celery for 5 minutes. I often wish recipes would note the time it might take to bring something to boil, especially with large amounts of liquid/ingredients in a soup recipe. In this instance, it took about 10 minutes to bring all of the squash, apples, broth, cider, and sage to a boil. I opted to simmer the ingredients for 50 minutes, an 10 additional minutes than suggested until vegetables were tender and the squash could be ‘squashed’ easily with a spoon.

I highly recommend using an immersion blender for puréed soups, it is just too cumbersome (in my opinion) to transfer a large number of ingredients back and forth to a blender. It took almost 10 minutes to blend everything with my immersion blender, including the addition of cream, salt, and pepper.

If you don’t have crème frâiche on hand, plain yogurt or sour cream is an easy substitute and you only need a dollop to enhance the already delicious soup. Any form of bread would do, brown soda bread is a perfect match but we also had Cheddar biscuits on hand which we spread with more Kerrygold Irish butter.

This soup will serve at least 10 and could be served as a main dish with a large basket of bread and butter on the side. It would also be a nice start to a dinner party or fabulous for an easy weekday lunch. My family of boys, the young ones included, all enjoyed this soup and the subtly sweet flavor and smooth texture and I was happy to fill them up with vegetables in soup form.

This pumpkin and apple soup recipe would serve 8 to 10 people. The soup tasted of squash, but the apple and cider ensured that it wasn’t too sweet. The soup was thinner than I might have chosen to make it so I might make it a little thicker next time. I had my soup with a cheese toastie.

I’d make the soup again, especially if I could buy prepared frozen squash as this was a very slow part of the overall time spent on the soup.

This pumpkin apple soup was delightful–with both squash flavour and the hints of apple from both the fruit itself and the cider coming through in perfect balance. My family loves squash soup and we have several favourites in our files. They all thought this was delicious and worth repeating.

My only criticism would be that I found it slightly thin. Reducing the chicken broth down from 5 cups to 4 cups might solve this issue.