This chocolate pudding pie combines a crunchy cookie crust, a silken bittersweet chocolate pudding, and clouds of voluminous whipped cream. Just like those classic pies you experienced as a kid at diners. But better.

This chocolate pudding pie combines a crunchy cookie crust, a silken bittersweet chocolate pudding, and clouds of voluminous whipped cream in a single dessert that tastes as spectacular as it looks. Just like those classic diner pies you see in the refrigerator case. But better. Don’t blame us if you find yourself sneaking to the fridge at midnight for seconds. Maybe thirds.–Angie Zoobkoff 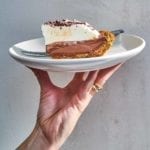 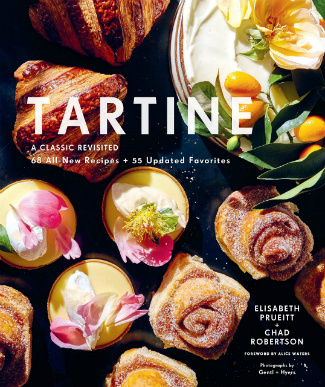 For the dark chocolate pudding

For the whipped cream topping

Wow! This is good. This simple dessert really delivers. A lovely crust with a warming touch of cinnamon and a rich, thick, creamy dark chocolate pudding with a heavenly finish of whipped cream and picturesque scattering of chocolate. A simple dessert that feels extremely indulgent.

It slices beautifully so you get a lovely wedge to sink your fork into. It’s wake-up-in-the-middle-of-the-night-to-sneak-another-slice-from-the-fridge good. If there’s any left, that is. Will definitely make this again and again.

I used only 1 tablespoon chocolate shavings.

I thought of this as like a chocolate cheesecake. The salt was evident in the base of the pie. I quite liked it and the pie had the consistency of banoffee pie and so the salt reminded me of the caramel in the banoffee pie.

The pie had a good taste and was easy to make so I would make it again or perhaps vary the flavour making a strawberry or vanilla flavoured custard instead.

This is the ideal dessert to prepare the day before and thus have more time when there are many other preparations to make. A silken pudding with a delicious chocolate flavor on a sweet and crunchy base that crumbles slightly, which is good, because the combination of this with the pudding and whipped cream is simply delicious.

But if you just want a pudding, this is also a great recipe, just pour it into small individual cups and decorate with the whipped cream and some fresh raspberries or strawberries!

A delicious and exactly-what-you-expect-from-the-name dessert. My tasters loved it as did I. It feels light but indulgent. A great special dessert that isn’t overly fussy.

For the crust, I experimented with animal crackers since they’re similar in consistency to digestives and an acceptable substitute in graham cracker crust recipes–and digestives can be hard to find and expensive. The crust came out a bit crumbly (in my research later I saw that other graham cracker crust recipes have more butter in them) but chilling the crust for a couple of hours before adding the pudding made a big difference to ensure the crust stayed firm and cut nicely.

I used the optional cinnamon in the crust but it was a crowd divider: bottom line, if you like cinnamon, you’ll love it because it’s a dominant flavor.

Also, the picture suggests a thicker crust than I produced, but the ratio of crust to pudding to topping was still just right.

I just couldn’t get the pudding to register 208°F. It quickly thickened and got very, very hot—perhaps my digital thermometer was off. I had it on the burner for over 7 minutes and I felt confident it was cooked enough I wouldn’t poison anyone (!).

I would suggest following exactly the directions to push through the strainer, then blend for 5 minutes. The result was a beautiful, silky smooth pudding of your dreams. I thought I might be able to skip the straining step, but after I finished with the strainer there were a few milk solids in the bottom. After using the immersion blender, the pudding looked beautiful. Worth the effort.

This has got to be the best chocolate pudding pie ever. My family and I so enjoyed this delicious treat. It was very simple to make.

I really enjoyed the crust made with digestive biscuits—this may replace my usual graham cracker crust as I’m appreciating the flavor a little more. The crust came together easily and the times listed for grinding the cookies as well as grinding the entire mixture were accurate. I baked this crust for approximately 7 minutes and this was a golden perfection.

The pudding was actually very easy to make. It did become thick early on but it took 6 minutes to get to 208°F. I struggled slightly with having to hold the thermometer and stir at the same time while the mixture was bubbling. So this is where I had to play a bit of a guessing game.

I had plenty of pudding filling to go into the crust and it didn’t spill over. I refrigerated this pie for approximately 6 hours and it was perfectly set.

The soft cream topping was easy and delicious. It came together quite easily in just a couple of minutes.

We cut this into 10 generous servings and you could go either way as some of my peeps had 2 pieces! This was truly a delicious pie and I am so happy that I made this for my family. It does need to be served on the day it’s made. The next day, the crust was soggy and the soft cream topping had fallen.