These shrimp burgers get their crisp coating from finely ground panko that’s pan-seared until golden and served with tartar sauce. Better than any seafood burger you’ll find on any menu.

A specialty of Southern coastal towns, shrimp burgers are all about the sweet shrimp (no bready fillers allowed) and a coating that mimics the contrasting crunch of fried seafood. To achieve the crunchy exterior of deep-fried shrimp burgers in a skillet, we ground panko to a fine powder before coating the burgers and sautéing them to a golden brown.–America’s Test Kitchen 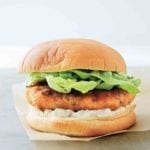 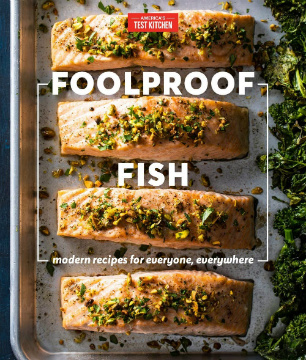 I had a 2-pound bag of large raw prawns at home so decided it sounded like a wonderful Saturday lunch option. I made my own fave tartar sauce and set the bag of prawns out to thaw. This was a little more than the recipe indicated but the burgers filled the buns to the edges!

The crispy topping made from panko was exactly what you would want with the shrimp! I thought the cayenne pepper was just the perfect touch of heat and didn’t overpower the shrimp. Salt and pepper were well balanced. I used 3/4 teaspoon of sea salt as I did have not table salt.

I used a processor and felt that the 8 pulses were not enough for the 1 cup shrimp amount nor were the 4 additional pulses were enough to get an even consistency. It produced some over sized pieces that did not want to stick together when you compacted it lightly. A processor did not really cut the prawns, it rather mushed them up but I went to 12 pulses and quit, perhaps less than 1 cup would be a better amount. Since I have never had a shrimp burger I have nothing to compare it to, but after I cooked the first 2 patties, I used kitchen shears to cut the bowl of shrimp mixture into smaller pieces and it produced a much better burger which didn’t fall apart while cooking or out of the bun while eating.

I would probably use a food processor for the first cup of shrimp to cut up to a thick mixture but mince or dice the additional prawns and incorporate into the seasoned mix.

Having only mayo as a binder is perfect. I would divide the fine crumbs onto 2 plates and flip a dipped patty onto the second plate for a more even coating and then into the skillet.

I placed a lid over the patty at the end as I took the bun out of the broiler and prepped it. I did temp test it but was more comfortable with a little additional time as there were some big chunks in my first batch and I wanted to make sure they were completely cooked. I used large sesame burger buns under the broiler for a toasty bun.

The butter lettuce was a nice touch though not noticed when eaten…but looked pretty. The burgers were a tasty change of pace. If you get the shrimp on sale then it’s a price-worthy treat and certainly cheaper than having shrimp burgers out. I bought the shrimp for tacos, which showcase a chunk of prawn almost like a lobster piece.

What a delightful surprise this was—a lovely light summer dinner that doesn’t use a ton of ingredients but has a ton of flavor! These were so flavorful and juicy! A new “go to” for me—especially as these ingredients are ones I always have on hand!

I was skeptical that the burger patties would hold together properly (no binder except a little mayonnaise) but they did. I left them sit in the fridge for an hour or so after I made them before I cooked them.

Could definitely add a little extra cayenne here for an extra kick! SO GOOD!

Being from New England, I had never heard about shrimp burgers, never mind tasted one. I was in for a tasty surprise. Although I used frozen shrimp, the taste of the shrimp was wonderfully sweet, very much like fresh shrimp. And the texture of the shrimp was not lost in making it into a burger. It had that pleasantly firm, slightly crisp, but tender texture of well-cooked fresh shrimp. And the panko crumbs added just a bit more crispness.

This recipe was a hit in my house and will be made many more times in the future. I served it with the delicious tartar sauce on the Leite’s Culinaria site, which was a great accompaniment and an arugula salad with fennel and red pepper

The most anticipated part of a North Carolina coastal vacation is sitting down to eat anything made with fresh wild-caught shrimp. So when I initially read this recipe and saw that the shrimp would be shoved into a food processor to be used as a binder, I felt my stomach lurch. Horrifying! Mutilating these tasty morsels which I’d much rather eat whole. Forget it, I said to my husband. “But shrimp burgers are my favorite,” he said. “I order it whenever it’s on the menu.”

I had my apprehensions, but rather than going with my gut, I went with my husband’s.

Thank goodness I married that man. The shrimp burgers were absolutely delicious. The flavor of shrimp took center stage. The panko breadcrumbs never tasted heavy or crusty as I’ve sometimes experienced with other coated burgers. Perfect texture and indeed a meaty bite.

My husband and I both like a bit of a kick in our food so I’d also increase the amount of cayenne pepper to 1/2 teaspoon, not too much, though, because you don’t want the pepper to outshine the shrimp.

All in all, I’d gladly pulverize a few shrimp to create this tasty burger.

I used store-bought rolls and wished I’d taken a drive to the local bakery. The roll is a critical component of this burger. I made rutabaga fries to go with the burger. They were a nice change from French fries.

Leftover shrimp burgers are delicious cold on top of a bed of lettuce the next day!

Holy cow, these are good! Perfectly seasoned with a lovely crunchy exterior—you don’t even need a bun, if you’re so inclined. But don’t skip the tartar sauce. They taste like summer!

The only raw shrimp I could find were a bit on the larger side, so I pulsed a few extra times to get the grind I preferred. These patties are pretty giant, and all 4 crowded my largest skillet (16 inches!). I cooked them for 5 minutes per side on medium and reduced the heat to medium-low and cooked for an additional 2 minutes per side to get them cooked through.

I can’t believe I am saying this, but I do think they are a bit too large for my liking. It was hard to finish the whole thing on a bun, but it was great on a bed of lettuce. They do reheat rather well, which was surprising! I plopped it in a cold nonstick skillet and slowly heated a patty through, about 10 minutes per side, over lowish heat.

If I were a shrimp, I’d want to be one of these burgers. I mean, why wouldn’t I grab an opportunity for a fresh transformation while being allowed to keep all of my good qualities? These burger patties aren’t like seafood cakes with lots of fillers. Oh no. They have plenty of succulent chunks of shrimp, and they taste like what they’re called. (Using a small amount of the shrimp and mayo as a binder is a great invention!) The cayenne, scallions, and tartar sauce add a touch of liveliness, and with the soft buns (mine were potato, lightly toasted) and tender Bibb lettuce, each burger is a perfect package.

It takes no time to prepare the burgers, but you could speed things up further by buying shrimp that is already peeled and deveined. If you’re so inclined, the Homemade Tartar Sauce recipe on Leite’s Culinaria is wonderful. I made it while the burger patties cooked and the buns toasted—a snap!