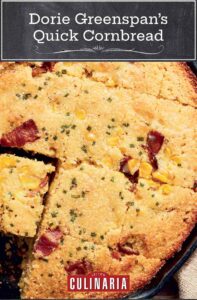 Dorie Greenspan’s quick cornbread has a lot of things going for it–it’s quick, moist, and just crumbly enough. Crispy edges and a tender interior, and the ability to add in nearly anything you like. With just a handful of pretty common ingredients, you can have freshly baked cornbread nearly any time you want.

Cornbread belongs to the quick-bread family, a clan of bread and muffins leavened with baking powder, but its name might just as well mean quick to mix and quick to bake. This bread, which I love alongside roast chicken, anything slow-simmered and saucy, and almost everything grilled, particularly fish, is delicious, good-looking, made with ingredients I always have on hand and put together in minutes.

The bread is moist yet still showcases cornmeal’s crumbliness (a virtue). I use fine-grain yellow cornmeal, but if you like gritty, you can try this with a slightly coarser grind. (Anything rougher is better for polenta or mush, where the cornmeal is cooked in liquid.) You can also add spices, herbs, corn kernels, crisp bacon, and/or chopped scallions and, if you like, top the bread with grated cheese; see the suggestions below. My favorite pan for this is a cast-iron skillet, but you’ll still get a satisfying bread if you use a baking pan or a pie pan.–Dorie Greenspan

HOW LONG WILL CORNBREAD LAST?

As with most quick bread, this one is best the day it’s made, although you can wrap it and keep it at room temperature overnight. You might want to reheat it or slice and toast it before serving. You can also wrap it airtight and freeze for up to 2 months; thaw in its wrapper and reheat or toast it. 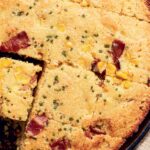 Whether you serve the cornbread straight from the oven or at room temperature, slathered with butter (and maybe a drizzle of honey) or plain as can be, you’ll find yourself marveling at how little effort it takes to make something so good.
Prep 20 mins
Cook 20 mins
Total 40 mins
Sides
American
8 to 10 servings
238 kcal
5 from 1 vote
Print Recipe

I tend to like my cornbread very “cakey,” and this definitely was. It’s the moistest cornbread I’ve ever made, soft, a little sweet, and just the right amount of crumbly. I added corn kernels, which added some extra texture and sweetness, and I would like to make it again with several of the suggested mix-ins, especially the jalapenos or scallions. The final quarter of the bread lasted another two days on the counter, still good at room temperature or warmed in the oven.

Dorie Greenspan’s quick cornbread, indeed, lived up to its name. Over the years, I have tried many cornbread recipes. I have been trying to make a cornbread that comes close to being as good as we get at a breakfast spot near us that bakes all of its bread from scratch every morning. No matter what I order off of their menu, I always ask for a side of their wonderful cornbread. This is as close as I have gotten, and this is, indeed where I am going to stop trying even more recipes, as I am very happy with these results.

I made my cornbread in a 9” cast-iron skillet. To me, a cast-iron skillet is a necessity for good cornbread. I didn’t use any of the “add-ins”, as I wanted to taste the cornbread plain, to see what it is like on its own. When I make it again, (which, now that I’ve found it, I’ll be making it again), I may very likely throw something else in the batter. Or, I like the idea of trying different things in different sections of my cast-iron pan. I may stir in corn kernels, scallions, and perhaps some grated cheese. Also may try some chopped pickled jalepeño slices. It will, of course, depend on my mood at the time, and what I have handy.

At the 20 minute mark, a toothpick inserted into my cornbread came out clean. I put the skillet on a trivet, and as soon as we thought we were safe from burning our mouths, we tasted the cornbread plain, as well as buttered. It was delicious, especially with some butter. I served the cornbread with our Labor Day smoked ribs, corn on the cob, and baked beans. The foods were a perfect complement to the cornbread. My only criticism would be that I felt that it needed more salt. I will make a note, and try adding more salt next time. I did use 2 tablespoons of sugar in the batter. I was hesitant, not wanting the cornbread to be sweet, but that did not prove to be a problem.

We had 3/4 of the skillet cornbread leftover. We sliced slabs of it, buttered them, and browned them in a cast-iron skillet for breakfast. It was very good. I wrapped and froze 2 sections of cornbread so that we can defrost them, and have them the next time we have BBQ, or, even when the urge hits. Hmmm. Chili anyone?

I’m always looking for that perfect cornbread recipe. It should be moist and not too crumbly and savory but have a touch of sweetness. This recipe is one of the best I’ve found so far. As promised, it was very quick to prepare and I liked the suggested additions. I added fresh sautéed corn that was leftover from dinner last night and scallions. It was perfectly moist and held together well.

The corn kernels added texture and the scallions enhanced the savory factor. I did not top this with cheese but I would if serving with chili or stew. I prefer my cornbread a bit sweeter and next time I think I’ll sprinkle a bit of sugar on top before baking. This is a very versatile recipe that could easily be modified to complement whatever you are serving or plain with a little butter and honey.

Dorie Greenspan’s quick cornbread is a nice, easy cornbread recipe. It’s nice to be able to customize add-in ingredients to go with whatever you are serving it with. Comes together very simply and bakes easily as well. I served it with fish and cheddar grits.

This quick cornbread from Dorie Greenspan was lovely! It was so incredibly easy, I’d recommend it for beginners or those who don’t consider themselves to be particularly good at baking. I made mine in a cast-iron skillet and served it alongside some chili–absolutely perfect combo! I added (frozen) corn kernels to the batter, which was a really nice addition. Next time, I may even brown the butter to take it to the next level.