This salt-baked red snapper uses an easy method of encasing a whole fish in a salt crust and then baking it to ensure moist, tender fish every time. Here’s how to cook it.

Adapted from José Andres | Made in Spain | Clarkson Potter, 2008

Called lubina a la sal, or salt-baked red snapper, there’s no better or simpler technique for cooking fish than this. The snapper baked inside the salt shell is soft and moist, with no hint of saltiness, in spite of what you might expect. You normally see this dish in restaurants, but it’s easy to replicate at home. After you make this dish a few times, you’ll discover the right combination of temperature, cooking time, and the weight of the fish to give you a perfectly cooked fish.–José Andres 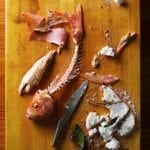 This salt-baked red snapper uses an easy method of encasing a whole fish in a salt crust and then baking it to ensure moist, tender fish every time. Here’s how to cook it.
José Andres with Richard Wolffe
Prep 20 mins
Cook 40 mins
Total 1 hr
Entrees
Spanish
4 servings
5 from 1 vote
Print Recipe 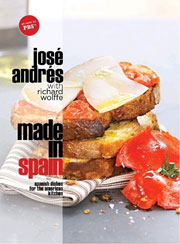 In a word: divine. Flaky and herb-infused, you barely need the salt and olive oil to finish this dish. Salt-baked fish is always impressive, and this particular rendition is no exception.

If your oven runs cool or you have a fish larger than the suggested 2 1/2 pounds, compensate accordingly by cooking an extra 3 to 5 minutes to be on the safe side (if it’s closer to 3 pounds, make it an extra 8 minutes or so). The fish is easy to present, but be careful when removing the top crust—if you didn’t make it thick enough, it may shatter. So practice—you’ll have many opportunities, since you’ll be making this dish again. And again.

Because this recipe calls for a whole fish and 3 pounds of salt, I can see how it would be intimidating. But it’s extremely easy and, quite possibly, foolproof. Once the fish is cooked, the salt lifts off fairly easily. And the fish tasted sweet and moist—succulent, I dare say.

Two caveats: the recipe says to season the fish with salt after it’s filleted. Mine didn’t need additional salt. Secondly, my fish was just under 2 1/2 pounds, but there’s no way it would have served four people. In our case, it served two adults and one child perfectly.

Contrary to what one may think, the salt crust doesn’t season the fish. But it does provide two big favors: it makes for a great presentation, and it keeps the fish super-moist. The flavors of the fish and the herbs were equally delicate and enjoyable.

My snapper was just under 2 1/2 pounds after gutting, and the amount of salt and the baking time were perfect for it. I allowed myself a little wiggle room in terms of where to put the herbs: half of the aromatics in the cavity of the fish, and the rest between the fish and the top half of the salt crust.

This is a quick and easy recipe, and the results are outstanding. It’s moist and wonderfully flavorful, and I can see using this method with a number of other whole fishes such as branzino, orata, or bass.

The recipe calls for sprigs of rosemary and thyme, which were difficult to incorporate into the salt—not to mention make it more likely that the crust will crack—so I chopped the herbs and blended them with the salt. I also placed lemon slices and herb sprigs inside the cavity of the fish, which imparts additional flavor throughout.

I’ve made this recipe with and without the scales on the fish, and the scales definitely protect the fish from absorbing too much of the salt. I didn’t season the snapper with salt because it had just the right amount of saltiness, but I did drizzle over a bit of Spanish olive oil, and it was just the right touch.

TIP: Instead of trying to balance temperature, time, and weight to figure out the right combination for cooking, simply use an instant thermometer inserted through the crust into the center of the fish. At a temperature of 140°F, the fish will be perfectly done.