Crisp potato cakes are latkes with a pedigree. They’re easy yet elegant and are large enough to be cut into wedges. Which means no standing at the stove forever and frying a million individual latkes.

A kissing cousin to the latke, this whopping plate-size potato cake that can be cut into wedges ensures you’re not standing at the stove all night long tediously turning one wee potato pancake after another. Regardless of the season or your religious affiliation, these are so darn satiating. Partly because boiling the potatoes prior to frying creates a crisp exterior and airy interior that reminds us of a place somewhere between latkes and home fries. They also have going for them that whole thing about fried potatoes being unspeakably satiating.–Renee Schettler Rossi 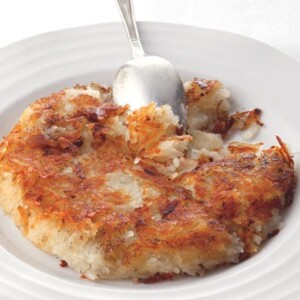 Crisp potato cakes are latkes with a pedigree. They’re easy yet elegant and are large enough to be cut into wedges. Which means no standing at the stove forever and frying a million individual latkes.
Prep 15 mins
Cook 1 hr
Total 1 hr 15 mins
Sides
Jewish
6 servings
190 kcal
4.50 / 2 votes
Print Recipe 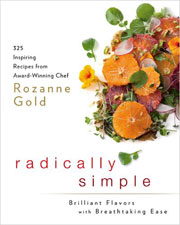 This crisp potato cakes recipe was fantastic! The recipe offers major bang for the buck with just three ingredients (five, actually, if you count salt and pepper). This cake was, as promised, crispy on the outside and creamy in the middle. TIPS: Boiling the potatoes first is a stroke of genius; the potatoes are ready when you can pierce one with a paring knife and meet with little resistance in the centre. Do be careful, though, that the skins on the potatoes are kept intact when boiling—one of my potatoes was a little too waterlogged to grate properly. I also found that tossing the potatoes and onions together with my hands helped keep everything in distinct pieces—and you do want the potato shards to keep their shapes so that the various edges of the grated potato get crispy. I added the oil and potatoes to the hot pan, then waited the prescribed time before turning the cake over, but it wouldn’t budge. A few more minutes fixed that. I guess it’s just like searing meat, in that it will release from the pan when it’s ready.

This crisp potato cakes recipe was a delightful version of a potato pancake. The exterior was crisp and browned, the interior light, moist, and fluffy. It just doesn’t get much better than that. I used a Yukon Gold-like, yellow-fleshed potato. I did add a bit more salt and pepper to the finished product, but my husband thought it was perfectly seasoned as it was. I could easily make a meal out of one of these when paired with a nice crisp salad.