This vanilla wafer banana pudding, which is actually a trifle, is easy to assemble with its layers of homemade pudding, crushed vanilla wafers, sliced bananas and pillowy topping of softly whipped cream.

Vanilla wafer banana pudding. Not a lot has changed since you last had this after-school classic. It’s still easy. It’s still quick. It’s still gosh darned comforting as heck. And here it’s better than ever before, made from scratch rather than from a box of instant pudding. One thing that has changed, thankfully, is the fact that there are now vanilla wafers on the market that don’t contain high-fructose corn syrup, trans fats, or any other multi-syllabic and mysterious-sounding ingredients that we stumble to pronounce.–David Leite 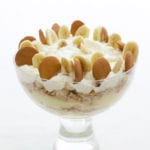 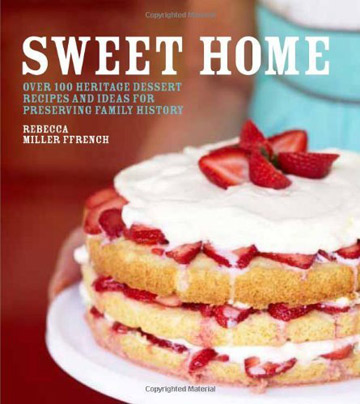 Yeah, you can make banana pudding with a box of vanilla instant pudding and a tub of whipped topping, but if you can spare the extra time and a little extra effort (and a few more dishes), this recipe is worth your while. The pudding is creamy and rich, the cream is lightly sweetened, and oh, the bananas are good too! To make things go a bit quicker, make sure the whole milk is at room temperature before making the pudding. I got a little too aggressive crushing the vanilla wafers and would have liked to have bigger pieces for a little extra texture.

This recipe was a blast from the past! Was it really that wonderful or was it the fact that it brought back memories of our childhood? Did it taste just like my mom’s? Since it has been at least 50 years since I’ve had vanilla wafer banana pudding, I can’t be sure. Nevertheless, it was delicious. The recipe was straightforward and easy to follow. I left the wafers whole, as my mother did, rather than crushing them, but I’m sure it made no difference in the taste. The pudding was creamy and delicious, with just the right amount of sweetness. I can’t wait to make this dish for my grandchildren.

In all of my years, I’ve never made pudding from scratch. I mean, I adore pudding and all of its luscious qualities. I simply haven’t ever felt compelled to make it. Let me tell you what: this is the best recipe for a first-time pudding maker. Seriously. This recipe came together so well and so easily that I think it would be fun to make with kids (if we had any). I wouldn’t change a thing about this recipe. Its creamy texture begs for a rainy day on the couch cause it’s all about comfort. On a side note, I managed to use the entire box of Nilla Wafers in this recipe by using all the remaining cookies and crumbs as garnish.

This vanilla wafer banana pudding was definitely a nostalgic dessert! It would be a perfect dessert in a trifle bowl, bringing back childhood memories. The pudding was a traditional one with cornstarch and egg yolks as thickeners. The pudding was creamy but the whipped cream put it over the top. We loved using crushed vanilla wafers (perfect use for the bottom of the box crumbs). Each bite had the perfect balance of creamy, crispy, and banana-y. I’ll keep this recipe around for all my Nilla Wafer pudding lovers!

This is a very good recipe for homemade banana pudding. It did take a little longer for my pudding to thicken than the 8 minutes stated in the recipe but it was well worth the extra time. I like the fact that the Nilla Wafers were crushed in the pudding. It made it much easier to serve because there are not whole crunchy cookies to try and break through. Everyone kept asking what extra spice I used and most thought there was nutmeg in the recipe. I can only think it was the use of lemon juice on the bananas that gave it that slightly different flavor. I had to show the recipe to prove there was no special spice added. Even though it takes longer than instant pudding and Cool Whip, the taste is well worth the time to make this recipe again and again.

Easy, delicious, and quite enticing! Flavor is spot-on and it is a really attractive spin on the usual banana pudding with the whole Nilla Wafers lining a bowl. This vanilla wafer banana pudding is an inviting, delicious way to end a great meal.

I served this to the extended family and everyone liked it. You need to like bananas because the flavor is evident. If you let the pudding sit in the fridge, the banana flavor permeates even more. Also, the longer you have the dessert in the fridge, the wafers may become softer. You could wait to put the decorative cookies on top right before you serve. Note that I used only 3 bananas (the number may depend on the size of the banana) and added more vanilla to the pudding portion because it tasted like it needed more.