Spicy eggs in hell, from Nigella Lawson, is a perfect solo meal for when you’re feeling like Dante’s inferno itself. The quick dish of tomato sauce, garlic, hot sauce, red pepper flakes, and Parmesan is guaranteed to perk you up. It can also be doubled or quadrupled to feed more than just your own gaping maw.

I feel I should address this recipe’s name, but I have nothing conclusive to offer you. The heat of the red pepper and the red of the tomato might more plausibly have led this to be called uova in inferno rather than in Purgatorio. [Editor’s Note: Uh, that means purgatory. Eggs in purgatory, given the recipe’s rather fire-and-brimstone-esque look.] Purgatory is the place where those who die in a state of grace but are not ready for ascension into Heaven must wait, in a long-suffering limbo. This, I do appreciate, is a simplistic categorization, but please: I’m writing an introduction to a recipe, here, not a work of doctrinal history. Besides, not being Catholic, all I know about purgatory I learned from reading Dante. So I particularly liked the hopeful literary attribution, which suggests that said dish of golden yolks rising out of Parmesan-hazy spicy tomatoes might be a reference to Dante’s having reached purgatory at dawn, and later hailing the advancing sun as the “cheeks of beautiful Aurora . . . changing into orange.” Yes, I know, I wouldn’t push it too far either, but you can’t blame a person for trying.

Let’s put questions of attribution and whimsical theories aside, for we have the pure and pleasurable physicality of the dish to consider. Now, normally I have an almost hysterically inflexible no-red-with-egg rule: I can’t bear to see so much as a blob of ketchup or broiled tomato near (let alone mixed with) an egg on someone’s plate. But these utterly challenge and overturn my previously rigid prejudice.–Nigella Lawson

How can I make this recipe for more than one person?

As to the cooking itself, if you use a little cast-iron skillet, only 7 inches in diameter, there is really only room for 1 egg; but generally, a small frying pan tends to come in at about 8 inches in diameter, in which case you can easily fit 2 eggs. Or you could always do 1 egg and drop the yolk of the second egg on the white of the first… Either way, this is so easy and speedy to make, you can find time to rustle it up for breakfast, brunch, lunch, supper, or late-night snack, whatever state you’re in. If solo salvation turns into brunch for a roomful of people, obviously use a bigger pan, and 2 cans of tomatoes would provide enough liquid—if there’s room in the pan—for up to 8 eggs.

What’s the benefit of cracking the eggs into a ramekin first?

Even a pro like Nigella knows that there’s nothing worse than cracking an egg into your dish and finding out that it’s not perfect. Aside from being able to see if there are fragments of shell, you can also be certain that your eggs are in good shape—fresh, with no imperfections. And sliding an egg out of a broken shell just increases the chance of breaking the yolk.

What’s the difference between eggs in purgatory, shakshuka, and huevos rancheros?

This recipe for Spicy Eggs in Hell is basically a riff on eggs in purgatory, a Southern Italian staple. Subtle variations are made around the world. Shakshuka, a Middle Eastern version, incorporates chopped peppers and loads of spices like harissa, cumin, and lemon. Huevos rancheros, from Mexico, uses salsa in place of the tomato sauce and is loaded with cilantro, avocado, refried beans, and warm tortillas. 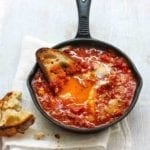 Eggs in purgatory is what to eat when you’re feeling like hell. I’m not saying that you have to have a hangover, but after an evening of carousing, eggs cooked in a fiery tomato sauce can feel like heaven.
Nigella Lawson
Prep 5 mins
Cook 10 mins
Total 15 mins
Breakfast
Italian
1 servings
315 kcal
5 / 3 votes
Print Recipe 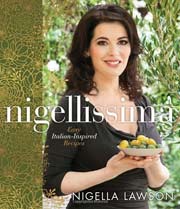 Do you want to know what I love most about this dish? It’s one of those that upon first description (and even first glance) totally underwhelms, but in the end, is a runaway hit so easy to make you could do it blindfolded. When I first told the kids that we were having Spicy Eggs in Hell for dinner, then explained to them what the dish included, I was greeted with a serious rolling of the eyes and a general look of disgust. “Why can’t we just have eggs like normal people?” Ugh.

I actually found the finished meal in the pan to be quite pretty—the bright yellow yolks peeking up from their bed of tomato sauce—but if their sneers were any indication, my resident food critics weren’t nearly as impressed. We dished ours up as finger food, spooning an egg and sauce onto grilled pieces of rustic bread that we had painted with garlic oil. One bite in and there wasn’t a critic left at the table. In fact, a race ensued to see who could be the first to get to the last few eggs in the pan.

And it couldn’t be easier. The simple tomato sauce comes together in minutes, and true to the recipe, the eggs were perfectly cooked with runny yolks at 5 minutes. We doubled the sauce ingredients to accommodate the 8 eggs, and the ratio seemed perfect. Be sure to break the eggs first into small individual ramekins or prep bowls to allow rapid, shell-free pouring into the sauce. The addition of various herbs or spices could enrich the sauce, but it was quite delicious as written, so such efforts should be viewed as completely optional. Wish I made more!

This Spicy Eggs in Hell is a nice spin on a favorite of mine, eggs in salsa. It really is the perfect meal for 1 or 2 in a hurry. I liked the taste of the canned tomatoes and fresh garlic, and using the red pepper flakes allowed me to control the heat.

I used a small 7-inch cast-iron skillet and the 14 ounces of tomatoes half filled it. By the time I added the eggs and sprinkled on the Parmesan cheese, the pan was pretty full. I had to cook it all at a low simmer so it wouldn’t bubble over. So all in all it took closer to 20 minutes from start to finish with being on the cautious side. The eggs were perfectly done with runny yolks and the whites were set. The Parmesan cheese blended into the tomatoes during cooking. With another sprinkle of Parmesan to serve it was a perfect meal for a busy Saturday.

When I make this again, I think a little basil sprinkled on top would make this perfect. I guess I have a new favorite.

This recipe couldn’t have been easier or more delicious. It fed 2 people for dinner (along with bread, salad, and an artichoke), but it could easily be whipped up for 1 person. As the recipe states, it really does only require 15 minutes, and I had every single ingredient on hand. In terms of the timing, I did find that you could simmer the tomatoes a bit longer if you used crushed tomatoes instead of chopped. I liked buying myself that added flexibility and I think that substitution and longer simmer resulted in a more flavorful and, well, saucy sauce. Not necessary, but nice to have as an option.

I also recommend using 2 cloves of garlic instead of just 1, as without that extra punch, I’m not sure the recipe warrants its “hell” title. Instead of cracking the egg directly into the pan, I suggest cracking it into a small bowl and then gently pouring the egg into a slight well in the sauce. This gives you more control and eliminates the risk of any shells finding their way into your dinner.

The recipe says to poach the eggs for 5 minutes. That worked perfectly for my taste, but the yolks had begun to set a bit. They were golden and oozy in the middle, but slightly firm around the edges. That’s exactly how I like them, but I think most people would prefer a slightly runnier center. Maybe start checking after 3 to 4 minutes. The drizzle of chile oil at the end was beautiful and added a nice punch. I placed the hot pan in the middle of the table with plenty of good, crusty bread to sop up the sauce.

This was quite good, although I’d like to add a bit more chili flakes since I enjoy things spicy. This was delicious with sourdough toast to dip in the tomatoey goodness. I used the optional extra Parmesan and chili oil and both added great flavor.

Spicy Eggs in Hell is a perfect quick and easy breakfast, lunch, or dinner, just as the author states. I think one can of tomatoes would easily feed 2 people although there was enough room for 4 eggs.

This recipe is so easy it practically makes itself. As long as you’re able to use a can opener and crack an egg, you’re assured of a brunch or dinner full of flavor. The bread for sopping up the liquid is certainly not optional.

A warm and filling breakfast, brunch, or lunch option for 1 or many. This dish is best accompanied by a really good loaf of bread, but given its use of pantry staples, don’t hesitate to make it even if your bread options are limited. Flavorful, mildly spicy, and quick to whip up, these Spicy Eggs in Hell are hearty and perfectly suited to a cold morning.