These spicy scrambled eggs, made with eggs, fresh green chiles, onions, tomatoes, and cumin, make for an unexpected and satiating stand-in for any time of the day. 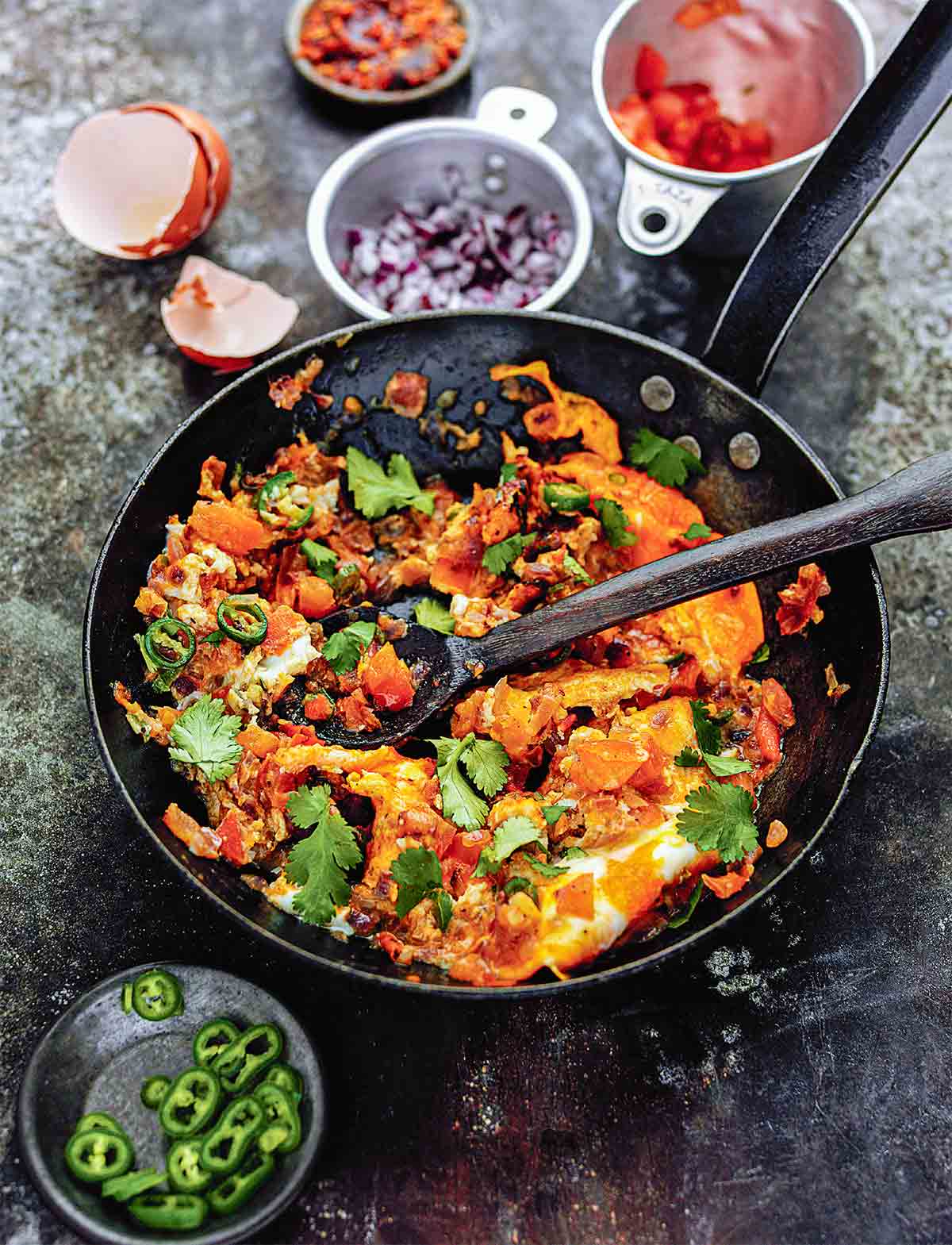 If you’re the sort who likes things spicy, even very first thing in the morning, then this spicy scrambled eggs recipe is for you. Depending on just how hot you want your eggs, you can choose from any of several chile peppers, and even opt to keep the seeds in if desired. What can we say? Some like it spicy.–Renee Schettler

Heat the oil in a large skillet over medium to medium-high heat and cook the onions, stirring often, until softened and golden, about 10 minutes.

Add the chiles and black pepper and cook, stirring, for 2 minutes.

Stir in the tomatoes and cook, uncovered, until the tomatoes have softened and reduced to a jammy consistency and the tomato juices have evaporated, 5 to 10 minutes more.

Meanwhile, beat the eggs in a bowl with the salt. When the tomatoes are softened and jammy, lower the heat under the skillet slightly and add the beaten eggs. Cook, without stirring, until the bottom of the eggs are set, 2 to 3 minutes.

Using a spatula, gently lift and flip a portion of the egg mixture. Continue cooking and folding or stirring the eggs once or twice more until the eggs are almost set, 5 to 10 minutes more. At some point during the cooking, sprinkle the cumin over the eggs and gently fold it through.

Remove from the heat and sprinkle with the cilantro. Serve with warm parathas, if desired. Originally published March 30, 2014.

These were a nice change for breakfast and a fairly easy preparation. I was concerned that it would pack a bit of heat since the recipe calls for including the seeds of the chile but I was pleasantly surprised by the mild heat it created. I used a jalapeno, so a different chile choice could definitely make it spicier. The cumin seeds and fresh cilantro brightened the flavor of the dish. Nice change of pace when you have a few extra minutes for some chopping in the morning.

I was cooking for one so I cut the recipe in half..

You will not find this for breakfast in a regular Indian restaurant, but this would be a staple in all the wayside diners called Dhaba all over the northern part of India. It is also a staple in many homes for Sunday brunch. It certainly was in ours.

Once all the veggies were cooked well, i added the eggs and followed the directions for the eggs. It was a very tasty unde ki bhurjee.

I usually like to add a pinch of garam masala to my eggs.

This isn't a *very* quick breakfast (it took about 30 minutes, start to finish), but it is easy to make and packed with flavor. I halved the recipe, as I was the only one eating, and, with other sides (bread, etc.), it would have been ample for two people. Needless to say, I ate the whole thing myself. Ahem.

The recipe calls for quite a lot of onion. My one large onion yielded two cups diced--and that was for a half-recipe. It does cook down quite a bit, but it's an oniony dish. Fine with me!
My local grocery store was inexplicably out of green hot peppers, so I went with one red jalapeno, and removed the seeds. There was a little heat to the finished dish, but not too much.

From the point of adding the eggs, the dish was done in seven minutes. I think mine would have been a prettier dish had I waited longer than three minutes to turn the eggs. I would suggest waiting till the bottom is fairly set, then folding gently, so that you have striations of egg and vegetables, rather than the mishmash I ended up with. So, mine wasn't as pretty as the picture, but with some chopped cilantro and a little bit of Sriracha squirted on top, this was a real winner.

I think the idea of Indian breakfast is fantastic. This was an easy and exciting recipe and should definitely be a part of everyone's repertoire. Fair warning, beware the fumes from jalapenos being sauteed over high heat! Nice flavor, which I'm sure could be played around with with parathas and condiments.

I used 2 jalapeno peppers, which I assumed would result in enough spice, and it did end up quite spicy, but if you REALLY like spicy then three would be fine.

Once I added the eggs, I gave them some time to set and then folded them gently into the mixture. This really became more of a stew, so the integrity of the eggs didn't really seem to matter after a while. All in all, I'd say they were done in about 5 to 10 minutes.

The spice and the flavor of this breakfast dish was a nice change of pace and didn't prove too difficult for a weekday morning preparation. This is a repeat recipe!

This made for a flavorful and fiery plate of eggs, but they didn’t look too pretty. The cilantro on top camouflaged the murky color somewhat. They served well for a lunch on a long weekend.

The prep time wasn’t too onerous, but I had more time to invest for lunch than breakfast. The total time involved ran past half an hour to about 40 minutes, but that included toasting and grinding cumin seeds. Obviously, commercially ground cumin wouldn’t have the depth of flavor of toasted seeds, but using that would cut the time involved a bit.

This was good served with some plain yogurt on the side to temper the heat from the chilies. Since no particular type of green pepper was specified, I used 1 serrano and 1 large jalapeno.

I used my largest skillet--and the next smallest would have been small for all of the ingredients--but it seemed too big for cooking the eggs properly. Even with six eggs, the egg layer wasn’t very thick, and with a lower than medium heat, it wasn’t cooking enough around the edges. It was difficult to do the initial lift and turn because the eggs were too liquid. After 3 minutes, it took another 2 until I was done adding cumin and folding, and the eggs were beyond set by then. And they were more of an unattractive jumble than a fluffy scramble.

This egg dish was delicious! The flavors were well balanced and pleasantly mild. I would imagine that the spiciness depends on the natural heat of the peppers that you use. The toasted cumin leant an intoxicating aroma as well as flavor addition to the eggs. I chose to serve this meal for dinner alongside warm corn tortillas and it was extremely well received!

I used 1 poblano pepper and 1 jalapeno pepper, both with seeds (approximately 1 cup chopped). Neither pepper was painfully hot or overpowering.

My husband and I managed to (easily) consume it all in one sitting. But we could have shared (maybe) with a third person.

I used one large red onion (3 cups chopped) and it was the perfect amount.

I will undoubtedly fix this dish again and will search for it on the menus of our favorite Indian restaurants.

I will start off by saying that I am not a huge fan of Indian food for reasons related to a severe illness while traveling in Nepal but this recipe had enough spice, I had the ingredients, and I have only recently discovered the unique flavors of roasted cumin and coriander seeds so I thought I would try it.

I know this says it's an Indian breakfast but it could just as easily be mistaken for a Mexican dish. Using 2 large red onions gave me almost 4 cups of diced onions. I thought that was a bit much so I started out with 2 cups. Once it cooked down though I was okay with adding the rest (actually, I sautéed them separately so I didn't overcook the first batch). Once I had my onions done, I added 3 jalapenos and then the tomatoes. I did have a thick jam-like mixture when it was done.

Since you add the eggs to an already hot mixture, the eggs cook quickly. Lifting and folding gently allows the eggs to fluff. I cooked them about 2 additional minutes before adding the cumin. As the eggs sat they firmed up even more. This is a definite re-make. I'm looking for hotter peppers next time, I wanted a bit more zip to the dish. I added green salsa to kick this up.

The dish was tasty and was quick and easy to make.

I used one bird eye chile pepper which is smaller and thinner and spicier than a jalapeno. It was a little hard to tell when the egg was cooked because of the slightly muddy color caused by the tomatoes and cumin.

This recipe took me by complete surprise. This is such an unusual combination of ingredients for a breakfast egg dish, it almost sounded unappealing. I am so glad that I decided to make this because my family gave this breakfast dish rave reviews and I will be making it again tomorrow morning.

Texturally, the eggs were almost meaty and all of the ingredients melded together to make a very tasty and hearty breakfast egg dish. Served with English Muffins and a dollop of sour cream, everyone including my teenager could not stop talking about this breakfast dish.

I was very hesitant to add 2 red onions to a breakfast dish of 6 eggs. did not want horrible onion breath first thing in the morning, so I used half of one large red onion (1 cup of diced red onion). When I make this again, I will use the whole large red onion because the onion really cooks down and in retrospect I would have liked more of the fried onion flavor.

I used 2 jalapenos with ribs and seeds removed. Next time I will use 3 jalapenos and keep a few seeds in for some heat.

After the stage of cooking down the onions and tomatoes, I would say jammy would describe the texture, all of the ingredients melded and cooked down together. I partially seeded my tomatoes and will do so again to help the final egg dish not exude any liquid.