This vegan baklava recipe shows you how to make the Greek classic with phyllo dough, agave nectar in place of honey, and not one but three types of nuts.

This vegan baklava may not be the classic ideal extolled in Greece, but it’s spectacularly close. It relies on a modest amount of agave syrup rather than copious quantities of honey for sweetness. What ensues is less cloying yet still altogether worthy of the gods. We daresay you won’t be disappointed. We certainly weren’t.–Renee Schettler 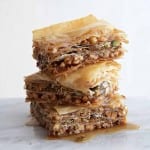 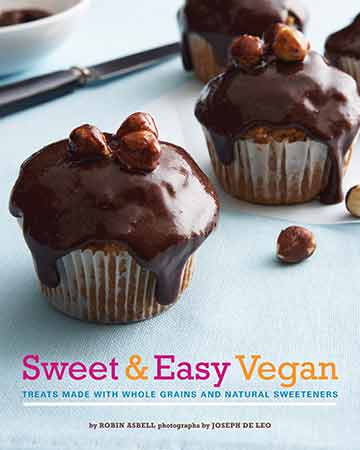 This is, simply put, OMG delicious. My friends and family loved it. Comments included, “Soooo good,” “OMG,” and “Can I get the recipe?”

Although not an authentic baklava, this can very well replace the classic. In today’s health-conscious world, I find this vegan baklava recipe to be the perfect fit. The use of the three varieties of nuts as opposed to all walnuts gives an added dimension and flavor.

I used shelled, salted pistachios and found the savoriness a great complement to the sweetness. I found all the ingredients in the local supermarket. I used agave, brown sugar, and phyllo made with wheat flour.

Cut it up, put a frilly toothpick in, and you’ll have the best dessert at any potluck or family gathering. Be warned, you’ll be making this again and again, so look into getting nuts in bulk. It’s that good!

This recipe is what baklava dreams are made of. I love baklava, and even without the butter, this reads authentic all of the way. I had so much fun making this recipe

and eating it! This was a dessert splurge I won’t soon forget!

I used honey instead of agave, and the syrup was quite lovely and not overbearingly sweet! I also loved the scoring technique, it worked perfectly!

My family nibbled on this all week. I store this in the covered 9-by-13-inch glass baking dish which I baked it in and it kept nice and

Another excellent recipe which I plan to make again!

This vegan baklava is delicious! While traditional baklava uses solely walnuts, the addition of pistachios and almonds adds tremendous flavor.

I used regular phyllo dough and light olive oil and loved the results. I found that I needed about 1/4 cup additional olive oil to complete the layers. I was tempted to use agave syrup as the recipe indicated, but in the end I couldn’t skirt tradition and had to use honey. Honey provides a gooey texture that agave syrup doesn’t seem to offer.

The baklava was simple to prepare, but the phyllo dough required quite a bit of patience. When I purchased the box of phyllo, I was concerned that there were 20 sheets, almost double what the recipe calls for, as I didn’t want to be wasteful. What I later realized, however, was that I needed almost all 20 sheets in order to get the hang of handling and assembling without massively tearing each sheet. Having extra sheets ended up being a good thing! I’m still not completely sure that I followed the cutting instructions correctly. The truth is, however, that it’s so good, nobody is going to even notice how it’s cut. So delicious!

I love baklava but never had the opportunity to make it myself. It wasn’t as complicated to make as I’d always assumed, it just took a bit of time and quality ingredients. I liked that this recipe was lightened up. I used half agave and half honey for the syrup, because that’s what my pantry dictated, and it was a nice balance of flavors and sweetness.

And how clever to use three different variety of nuts here! I liked the variation and the flavors of these three nuts in the dessert. To tell you the truth, I didn’t think there would be enough of the gooey, honey-flavored sauce when I was pouring it over the top of the baklava, but after it sat in the fridge for a while, the sauce soaked into the different layers and oh my, it was crisp on top and each layer of nuts was perfectly flavored.

I truly enjoyed making this classic confection and will keep this recipe tucked away in my recipe folder to make again soon!

I make baklava a few times each year, but as with any recipe, I always enjoy finding a better-tasting version or a simpler process. This is definitely simpler than my current recipe and was equally well received. The final product was also not at thick as my usual recipe, which made it a little easier to eat.

The flavor combination of the three nuts was great, but next time I think I’ll just mix the nuts together in order to have fewer dirty dishes and steps. I’ll also toast the nuts first, and I may even add a tiny amount of butter to the nuts to help them bind together more.

We followed this recipe closely, using olive oil to brush whole wheat filo and honey instead of the agave syrup. The final dessert is deliciousness with lemon and toasty nuts and honey. Fun and easy to make with a child.