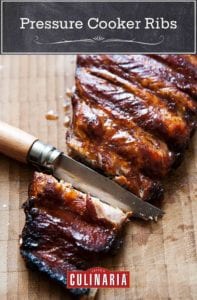 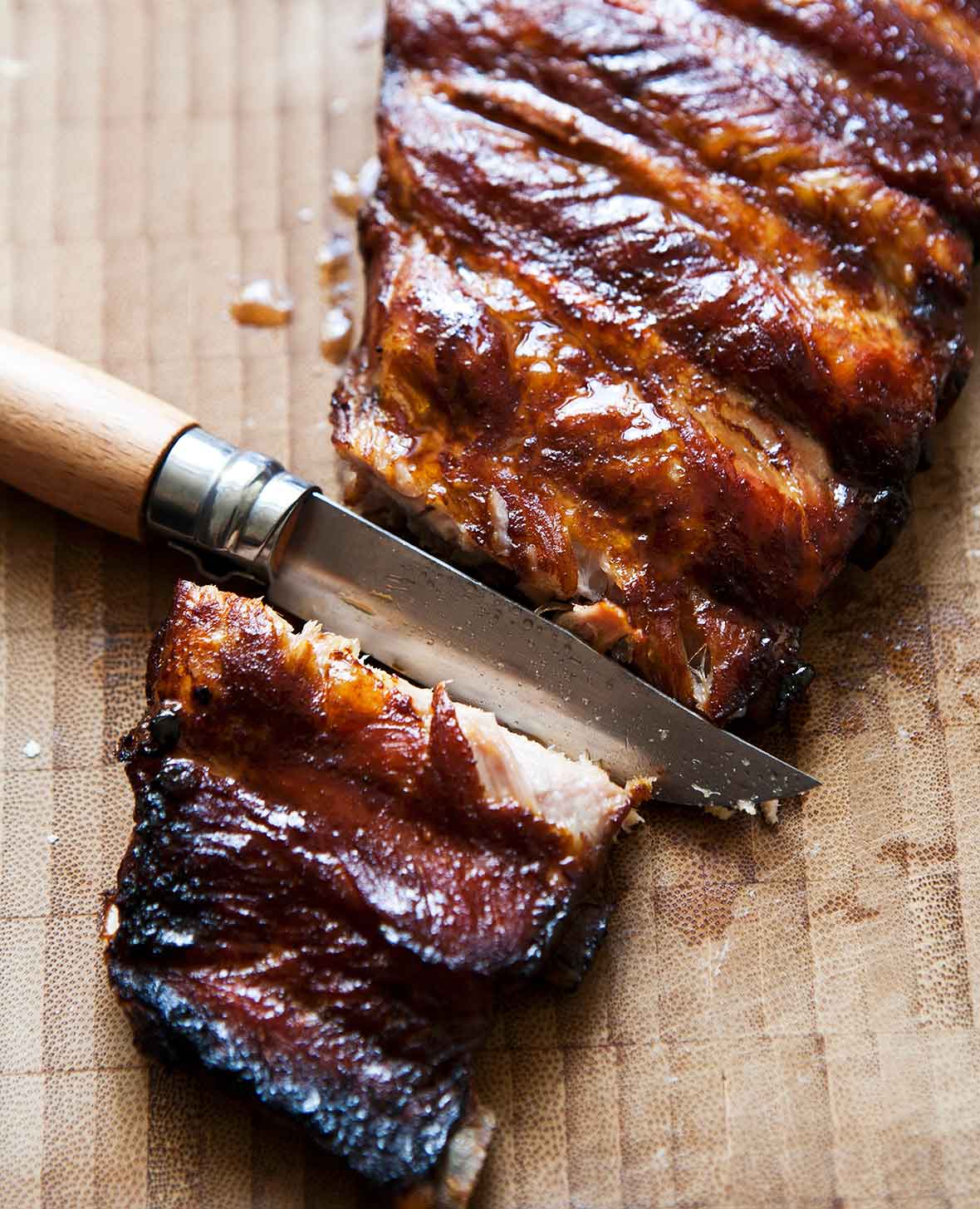 *HOW TO REMOVE THE MEMBRANE FROM RIBS

To remove the membrane or silver skin from a rib, use the tip of a small knife to loosen a corner and then grab the membrane with a paper towel and slowly pull it off. 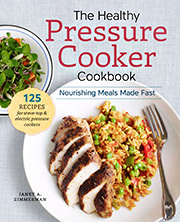 Cut your 1/2 rack of spare ribs into 2 or 3 pieces so all the ribs will fit in the pressure cooker. Sprinkle the ribs on both sides with the kosher salt and season with pepper. Pour the beef stock into the pressure cooker and place the steamer insert in the cooker. Place the ribs on the steamer insert. Rather than stacking sections of ribs, place the rib sections on end and sort of curl them around the pot so the pieces aren’t touching to ensure even cooking.

Lock the lid in place and bring the pot to high pressure (15 psi for stove top or 9 to 11 psi for electric). If using a stove-top pressure cooker, maintain the pressure for 20 minutes for tender ribs or, if you prefer that the ribs be falling-off-the-bone tender, cook for 30 minutes, adjusting the burner as necessary.

If using an electric pressure cooker, such as an Instant Pot, cook at high pressure for 20 minutes for tender ribs or, if you prefer ribs that are falling-off-the-bone tender, cook for up to 30 minutes. When the timer goes off, turn the cooker off. Do not let the pressure cooker automatically switch to the “warm” setting.

Use the natural method to release the pressure in the cooker. Unlock and remove the lid. Using tongs, transfer the ribs, bone-side up, to a rack placed on an aluminum foil-lined sheet pan. Let the cooking liquid in the pressure cooker rest for several minutes to allow the fat to rise to the surface.

Meanwhile, preheat the broiler and adjust an oven rack to the top or second position.

While the broiler heats, spoon off and discard the fat from the surface of the cooking liquid. Place the stove-top cooker over medium heat or turn the electric cooker to “brown” and bring the stock to a vigorous simmer. Cook until the stock is reduced to 1/3 of the original volume, 8 to 10 minutes.

Stir in the mustard and brown sugar, and continue simmering for about 6 minutes more, or until the sauce resembles a thick syrup. Remove from the heat.

Baste the bone side of the ribs with some of the mustard sauce. Slide the ribs under the broiler until the sauce is bubbling, about 4 minutes. Remove the sheet pan from the oven, turn the ribs over, and baste with the remaining glaze. Return to the broiler until warmed through, about 6 minutes. Cut the ribs into 1- or 2-rib sections and serve. Originally published December 4, 2015.

How To Make These Ribs Using Your Own Barbecue Sauce

Ribs are generally relegated to the weekend when we have enough time to complete the arduous task. No more! I've tried many methods and recipes for preparing the perfect porcine delight. Smoking, oven-roasting, and on and on and on. These ribs are as fine as any that I've made. The most exciting thing? I can roll in the door at 5:30 p.m., hit the shower, and still have amazing ribs on the table by 7 p.m.!

Spare ribs are exactly the kind of food I'd really rather eat at home, where one can unabashedly eat with one's hands and lick one's fingers, but this never happens at our house—too much epic prep and time for 2 people—so I eagerly accept invitations for BBQ ribs from friends with smokers and maybe some Texas experience. While I was excited to see this recipe for pressure cooker ribs, I was also skeptical that such a simple approach would work.   With the confidence of my pressure-cooker-loving spouse, we took this recipe on.

What I love about this recipe is that while it may not be something you always want to do on a weeknight, these are short-timeline spare ribs, and the recipe works for just 2 people! We actually made it twice. Batch one was strictly according to the recipe and at the low end of the time at just 20 minutes under pressure (2 rings on a 7 liter Kuhn Rikon stove-top pressure cooker, using induction hob).   For the second batch, we extended the pressure time to 30 minutes. The second batch was also from the larger, fleshier end of the rack and gave off a bit more fat. At 30 minutes, you have fall-off-the-bone meat, followed by just-short-of-blistering charred crispness from the broiler. If you can leave your oven door open when your broiler operates, you will do well to stand right there and monitor it.

"Is that that crazy Instant Pot thing?"

I don't know if our success was due to Janet Zimmerman's excellent directions (other pressure cookbooks, especially Instant Pot tomes, have proven a bust for me), or perhaps I'm starting to get a handle on this Instant Pot Headache contraption. Or a little bit of both.