These rosemary apple hand tarts make individual apple pies that are simple, subtly flavored, and sophisticated. Even better, you don’t have to share yours. Not with anyone.

Rosemary apple hand tarts are essentially individual apple pies that are nestled in a rich, flaky pie crust. A hint of rosemary in the tartly sweet filling and the refined smokiness of lard in the flaky crust lend a subtle savory note to the tarts. The best part? You don’t have to share yours. With anyone.–Angie Zoobkoff 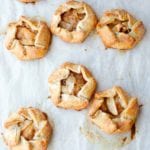 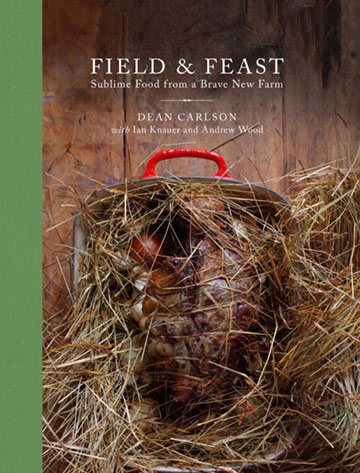 For the apple filling

These adorable rosemary apple hand tarts are, for me, the epitome of autumn—rustic in nature but elegant enough to be a show-stopping dessert at a dinner party. It was the smaller details of the recipe that drew me in and the combination of these unique details made for a really terrific final product. The details I’m referring to are the use of lard in the tart crust, the hint of rosemary in addition to traditional warm spices, and the dash of Angostura bitters in the apple mixture. The lard not only gave the crust a nice flaky texture but a hint of savory flavor as well. I decided to go with Golden Delicious apples because I find them to be great for baking in general. They have a sweet but mellow flavor and they cook down very well in a pie or tart. My only suggestion for the filling is I think the apples needed more liquid to cook in or perhaps a pat of butter. (The mixture in the saucepan was a bit dry and I was afraid the spices might burn so I added 1 tablespoon butter as well as a little water.) The smell of the apples cooking with the spices, the rosemary, the lemon, and the dash or so of bitters was divine. The apple mixture alone would be grand with a grilled pork chop or cooked further as an apple sauce. This made 6 tarts although I had a bit of the lovely apple filling left over. No worries! The extra filling was enjoyed over oatmeal this morning. The crust on the tarts was a lovely golden brown and flaky. I didn’t serve them with ice cream, although a small scoop of vanilla would be great. Or maybe even a dollop of mascarpone or creme fraiche. Overall, this dessert was chic, tasty, and fun to make!

Delicious. I used Honey Crisp apples in these rosemary apple hand tarts. The dough came together nicely and was really flaky. The first time I made these they weren’t at all bad but just a tad too sweet for me. I made the rosemary apple hand tarts a second time and doubled the amount of rosemary from 1/2 teaspoon to 1 teaspoon, sprinkling 1/2 teaspoon on the tarts after they had baked. I also cut the sugar down to 1/4 cup and I was much happier. They make a great dessert to take to a potluck. I put the sugar on at the last minute so it was still visible when people picked them up.