Say hello to this sweet potato purée with marshmallow, your newest go-to side dish, and not just on special occasions. Mashed sweet potatoes are topped with homemade marshmallow topping (or store-bought mini-marshmallows) and slid beneath the broiler until bubbling and toasted. Buttered toasted pecans add crunch.

You may think, at first glance, that this is the same old sweet potato and marshmallow casserole you grew up eating each Thanksgiving. And you’d be partly right. It’s definitely inspired by that American classic. Yet there are critical differences that make it an undeniably grown-up offering. First, it doesn’t take up valuable oven space while you’re juggling 14 other things that need the oven on the busiest cooking day of the year. Second, it relies on actual sweet potatoes that were dug out of the dirt locally rather than mushy, tin-tasting canned sweet potatoes. Third, it’s quick and easy enough to throw together for a side on any given weeknight. If you really want to impress anyone, including yourself, you can fancy it up by making the marshmallow topping from scratch. But store-bought mini marshmallows do quite nicely. As with most adult things, that’s up to you.–Angie Zoobkoff 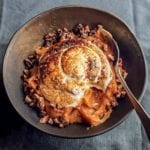 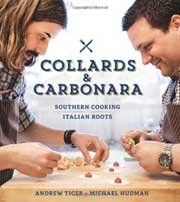 For the sweet potato purée

This sweet potato purée with marshmallow makes a subtly sweet side dish good enough to grace any holiday table or weeknight meal. The resulting dish was delicately spiced and slightly sweet. It was certainly a big hit with the family. Since it was fast and easy I’m sure it will be making more frequent appearances for weeknight and holiday dinners.

The sweet potatoes were quickly peeled and boiled while I made the pecan topping. I had to stop the food processor several times to stir so I could get a smooth purée. As this was part of a weeknight meal, I chose to use mini marshmallows for the topping. The purée was put into a shallow baking dish and after topping with the marshmallows I broiled it for a few minutes to get it golden brown.

The only criticism is that the food processor makes the purée too smooth. We seem to prefer a more rustic sweet potato mash. I think next time we’ll mash it by hand and add in the rest of the ingredients before adding the marshmallow and pecans.

You may think this sweet potato purée with marshmallow is just the same-old sweet potato casserole and yes, you’d be partly right. But it is a grown-up version for sure. First, the sweet potatoes have only a tablespoon of added sugar and trust me, the sweet potatoes are sweet enough on their own, so you won’t miss all the sugar usually called for. And the marshmallow topping isn’t any topping, but hand-crafted, hand-piped marshmallows! These make for such better flavor and are lighter and more elegant looking than what you can get from store-bought marshmallows.

When I made the marshmallows, I couldn’t find leaf gelatin, so I substituted 2 envelopes of Knox gelatin and followed the rest as instructed. There was more than enough marshmallow, even when I doubled the sweet potatoes, which I would recommend if you’re feeding a holiday crowd.

I also baked a smaller portion of the sweet potatoes in a smaller casserole without the marshmallow topping (though I wouldn’t dream of skipping the sprinkled pecans!) for those guests who wanted to avoid the extra sugar and I think it was nearly as popular.

If you’re disinclined to make the marshmallows from scratch, rest assured the sweet potatoes are perfect on their own and would probably do just fine with store-bought marshmallows. Either way, this dish could be ready in under 20 minutes.

Finally, as a last selling point, this recipe was easy to make ahead and finish at the end with the marshmallows. I heated the sweet potatoes nearly to temperature before piping on the topping and then finished it up under the broiler.