We could list the many, many things we adore about this chocolate chunk skillet cookie. But if you’re anything like us, you don’t need any persuasion to partake of a ginormous, gooey, chocolatey chocolate chunk cookie straight from the skillet. And you’d be annoyed if we waste any more of your time before you get to the recipe. (Correct us if we’re wrong.)–Angie Zoobkoff 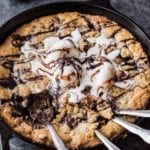 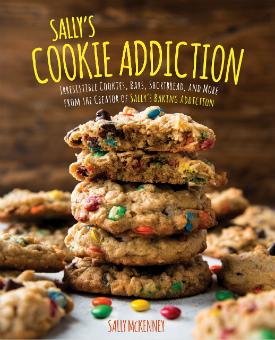 What’s not to love about a skillet cookie!!?? Melty and gooey yet crisp and warm. It’s like eating just baked or raw cookie dough. It’s a cookie, so it’s sweet, but thanks to the sprinkling of coarse sea salt, each bite is nicely balanced.

Honestly, the most challenging part of this recipe is remembering that you need room-temperature ingredients and a preheated oven. Or, in my case, purchasing a 10-inch oven-safe skillet. (I had been on the lookout for a nonstick 10-inch skillet for frittatas forever.) Other than this, the ingredients and preparation time makes a no-excuse, easy-bake dessert. Also, very little clean up!

I prefer dark brown sugar and bittersweet chocolate in my baked goods. The only part I would do differently next time is coarsely chop a chocolate bar instead of using morsels so the chocolate shards melt unevenly throughout the cookie. I found the chips to glob together when melted. I also like to use vanilla bean paste (Heilala brand) instead of vanilla extract in all my baked goods. The finished dough was stiff and pliable but not sticky. It served 6 people generously.

Scoops of good vanilla ice cream hit the spot. We had chocolate syrup on hand but we didn’t use it. The next morning, the remaining half of the cookie was eaten with ice cream by my teenagers. They generously left me a small nub to go with my coffee. The cookie texture was chewier and tasted less sweet than when it was fresh out of the oven. In both cases, yum!

I loved that I could prepare this dough over the weekend and then use it to make a quick and delicious treat for my family during the week. The kids loved it and the leftover cookie was a great addition to the next day’s lunchbox. (It was firm the next day but still tasted good.)

My cookie took 30 minutes in the oven; however, I had chilled the dough. I left it on the counter to come to room temperature for around 20 minutes. (It was still cool to the touch, which increased the baking time.)

This was an excellent sweet treat that I would absolutely make again. It came out of the oven smelling and looking like a giant warm chocolate chip cookie. The pan also cleaned up easily, which was a bonus.

I used light brown sugar and semisweet chocolate chips. The finished dough was softish but still held its shape. It was firm enough that it was hard to stir chips into it. It was a little sticky but not a lot. It would have been a perfect consistency to go into the oven at that point but I needed to delay making it until later. It went into the refrigerator for 2 3/4 hours and then needed another 1 1/4 hours to get back to room temperature. (My timing could have been better on this and it wouldn’t have needed to be be refrigerated at all. But refrigerating and then bringing back to room temperature worked.) I added several pinches of Balinese coarse Kechil sea salt on top.

After 25 minutes it came out smelling and looking like a chocolate chip cookie—light brown all over and slightly browner on the edges. The middle was still a little soft but done through. So 25 minutes was the perfect time.

It was fairly easy to cut the cookie into wedges in the pan to serve, but just gooey and crumbly enough for an extra bit of decadence. Pieces pulled away with no problem from the buttered cast iron skillet. We didn’t adorn it with anything else and it didn’t need it.

The remainder of the pieces went into the refrigerator, sealed up tightly. The next day, after it had been out about a half hour at room temperature, we had a piece and my husband preferred it to the gooey warm version. It was much more the consistency of a standard bar cookie. In addition to the difference in texture (firmness), the salt was more prominent in the cooled version. A satisfying chocolate cookie either way.

I have made a number of skillet cookies in my time using all manner of cast iron skillets. The biggest problem I’ve encountered with most recipes is that the edges get too crisp before the interior is cooked through. However, this particular dough is a little drier than most that I’ve tried and I found that it cooked well throughout without losing the edges to inedible charcoal.

I used a mixture of semisweet and milk chocolate in order to give it a little more depth of flavor. The dough was soft and fluffy but not particularly sticky. I did find it drier than I expected.

The flavor is excellent and, despite its size, it remains chewy and tender throughout.

Who can resist warm cookies straight out of the oven? Not me, that’s for sure! So I certainly couldn’t resist this recipe.

I didn’t have a cast iron pan of the correct size so I used an anodized aluminum pan instead. I think this may have caused me to underbake the cookie a little more than I would have liked, so next time I would bake it for 30 minutes and let it cool a bit longer in the pan—maybe 10 minutes. Even though the cookie was a little underbaked, we enjoyed the gooey, melted chocolate and caramel notes. I will definitely make it again. It will be a great way to serve warm cookies to a group of people for a dinner party or other gathering.

I didn’t top it with chocolate sauce or ice cream and it didn’t need either, in my opinion, but I think the contrast between the cool and the warm would add another irresistible element to this dessert.

I don’t have a 10-inch cast iron pan so I used an anodized aluminum pan of this size. I’m not sure if that had an effect on the outcome, but it is possible since cast iron holds heat well, the cookie would have cooked a little more while cooling in the pan than the one I made. As it was, the cookie was underdone in the middle after 25 minutes. I let it go a little longer, but I was afraid of overbaking it so I took it out at 28 minutes. It was still very soft in the middle after 5 minutes of cooling. Had I been serving it to others, I might have put it back in the oven to bake a little longer, but since it was just me and my husband, I decided to try it anyway.

It was overly soft the first day, no doubt about it, but once cooled, it had the consistency of a soft, chewy cookie that seemed perfect. We enjoyed it over the course of several days, heating it up for a short time in the microwave to get the warm, gooey effect after the first night. It was just as good several days later. Actually, I liked the consistency better on subsequent nights.

We ate it unadorned and I wouldn’t change anything about that, even though ice cream would probably be a good contrast to the warmth.