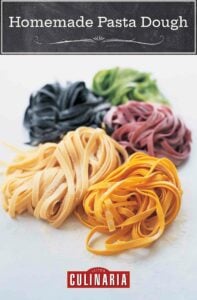 This homemade pasta dough is foolproof and easy to make by hand or with your stand mixer with just eggs, flour, olive oil, and salt. Italian through and through. Here’s how.

Homemade pasta dough—we’re talking the fresh stuff made from scratch in your own kitchen according to Italian tradition. It has a taste and texture that’s every iota as spectacular as you’d imagine. There are countless variations on how to make fresh pasta. Some more complicated than others. Yet this straightforward recipe relies on just flour, eggs, salt, and olive oil. Authentically Italian through and through. And lovely and tender enough to make you weep.–Renee Schettler

The magic of this particular recipe can be found in its mixture of 50% Italian “00” flour* (which is lower in gluten than most American flours, it’s an exceptionally light, almost powdery flour that yields dough that is softer and suppler and easier to work with) and 50% Farina di Semola (finely ground, pale yellow, hard durum wheat flour for making pasta and some bread). It can be a little tricky to find 00 flour in some regions but chances are you’ll find it at most specialty stores, some grocery stores, and, natch, online.

Do I need to knead pasta dough?

The homemade pasta dough that results has just the perfect firmness—kindly note that the pasta dough should require some serious effort when kneading. When kneading or rolling the dough, be careful not to add too much flour, or your pasta will be tough and taste floury.

If I wanted to make just one portion of pasta, how much flour and how many eggs should I use? 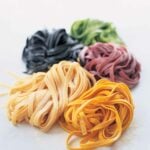 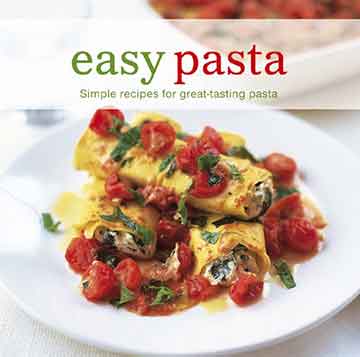 Pass the homemade pasta dough through the pasta machine

How to color Homemade Pasta Dough

This is a straightforward, lovely, easy, basic homemade pasta dough recipe. I made it with my 9-year-old granddaughter, who became a master of cranking the pasta machine.

I hunted down the Italian 00 flour and the farina di semolina so that we could test the proper flours. I also used large eggs instead of medium. It took only 1 to 2 minutes of kneading the dough. We made the basic medium-wide noodles and will make the pasta dough again to try some of the other shapes. All in all, it was a great hit for dinner with a hint of butter, chopped Italian flat-leaf parsley, and freshly grated cheese. It’s definitely a keeper.

This is a homemade pasta dough recipe that works.

I used a 50/50 mix of Italian 00 flour and semolina. I also used large eggs. It took some kneading to get the dough to come together at first, so I can see how one might need extra water if medium eggs are used. I only kneaded it for 5 minutes and after that, the dough was stiff but cohesive—there were no hanging straggly parts or anything like that. I find pasta dough benefits hugely from rest so I didn’t knead it any further. This is also the first time I’ve seen the suggestion of rubbing olive oil over the dough before resting. I don’t know if that’s what made everything nice and soft, or if it was the rest itself, but the dough ended up smooth and supple.

I did have to use the thickest setting of the pasta roller for the first pass (I used my KitchenAid attachment, not the manual crank one), but after that, the homemade pasta dough rolled out very nicely, even when using the second-thinnest setting. I cut half the pasta into fettuccine using the attachment, while the other half I hand-cut into tagliatelle. The sheets seemed to dry faster than I’m used to, but that could’ve been due to the weather, as it was a little warm and dry in the kitchen.

The recipe headnote says that for every egg used, you’ll end up with about 1 entree portion of pasta. I ended up with enough pasta to serve 4 people—and we were hungry! It took 2 minutes for the noodles to cook al dente after the water came back to a boil.

Fresh pasta is always great, and this didn’t disappoint. There’s a nice bite to the noodles, and they’re not heavy on the egg flavor. It’s the first time I’ve made pasta using the flour-well method (I usually whiz it together in a food processor) and it worked really well. We ate some of it buttered with Parmesan and some with spinach and cream.

I didn’t have 00 pasta flour on hand, so I used regular AP flour and large eggs. My pasta dough was initially very dry and wasn’t coming together very well. With the addition of a few drops of water at a time (about 1/4 cup total), the pasta dough finally came together. I kneaded it for about 5 to 7 minutes and still wasn’t sure if the dough was going to be too dry, but I massaged the outside of the dough with a little olive oil and popped it into a resealable plastic bag. Half an hour later, I had a mound of homemade pasta dough that felt ready to work with. The rest time really did help.

This homemade pasta dough recipe was my first attempt at semolina pasta made from scratch and I was very pleased with the results.

I used half 00 flour and half semolina and adjusted the recipe for flavored pasta. I added 2 tbsp pureed carrots and it was delicious with spicy sausage and a creamy tomato sauce. The pasta dried much more quickly than egg pasta, which made cutting it into linguine much easier as there was no sticking. I can’t wait to try other flavors!

The homemade pasta dough came together beautifully, though next time I’d omit the oil. After a 5-minute knead, the dough was smooth and elastic but needed a little rest. When I rolled it out in the pasta maker, it was beautiful to work with.

Though the recipe suggests you send the whole thing through the machine at once, I found it much easier to divide the dough into 6 walnut-size pieces. I then cut the sheets into pappardelle, but when cooking I pulled the noodles out before they were ready, at about 5 minutes, then sautéed them in a pan with ramp bulbs, butter, and a bit of the cooking water. I served this with toasted bread crumbs and loads of cheese.

I’d totally make this again—this homemade pasta dough was so effortless that I’d only bother freezing this if I was making stuffed pasta, like ravioli. In my testing, I doubled the recipe and used half semolina flour. I also had some ramps, so I blanched the greens and used them like you would in the recipe’s spinach variation. The amount of ramp greens I had was well under the 3 to 4 cups of spinach called for, but the bossy flavor of the ramps more than made up for it. The color was pale mint green with flecks.