Braised chicken with cinnamon takes its hue from saffron and can be made ahead of time for the best flavor. Perfect for entertaining. Serve over rice, mashed potatoes, couscous, or polenta.

This lovely braised chicken with cinnamon dish, as contemporary as it sounds, is inspired by an Andalusian cookbook dating back to the 13th century, offering insights into the manner in which spices were used in Islamic Spain, explains author Deborah Krasner. And making us think they dined better in the Middle Ages than we’d ever imagined.–Renee Schettler 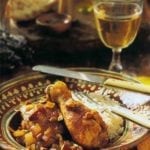 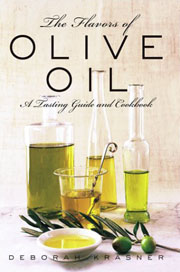 This recipe’s long list of small amounts of ingredients had me wondering if they were all necessary and worth the bother (though only the lavender buds took any effort to track down). The resulting aromas and complex flavors of the dish convinced me that I wouldn’t have wanted to leave out a thing. I was unable, however, to verify the headnote’s contention that the dish improves over time because there was not a morsel left over. This is definitely going on my short list of potluck dinner dishes.

The divine medley of tastes from this dish is still sumptuously smacking on my palate. Tender chicken that succulently falls from the bone, boldly flavored with a unique spice blend and enlivened by the sweet toasty crunch of the honey and almonds, it brings to the table a very surreal and ultra-satisfying dining experience.

I served this for a small dinner party with a spinach and dried cherry salad, crunchy baguette with an herbed compound butter and a toasted-almond banana ice cream. My appreciative sated guests swooned. This dish is undoubtedly in the top ranks of my frequently made recipe list.