I learned how to make this classic Chinese dish in Beijing. On a snowy winter’s morning I took a cab to a traditional Chinese home in the north of the city to do some cooking. The taxi driver dropped me off and I walked along the narrow streets, shivering, looking for the right house, which turned out to be a few tiny rooms around a courtyard. So in a freezing kitchen, my host, the cooking teacher Cheng Yi, and I made a superb lunch, including this fiery, warming chicken. A good meal in China is always followed by tea, so after we’d eaten we sipped on a lovely hot brew and watched the snow fall thickly in the stone courtyard outside, like a scene from the film Crouching Tiger, Hidden Dragon.–John Gregory-Smith

Okay, here’s how we understand the relationship between Gung Bao and Kung Pao chicken, aside from the fact that they rhyme. The former is an authentic Szechuan recipe, a classic stir-fry consisting of chicken, chiles, Szechuan peppercorns, and peanuts. The latter is the bastardized, er, Americanized rendition of the former containing less spice but more vegetables and beloved by “Chinese” takeout mavens across this country. This recipe is–you guessed it–the former. 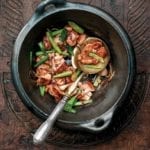 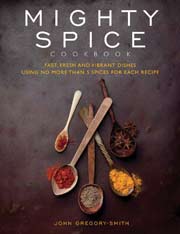 This recipe exceeded all my expectations. I have been disappointed in the past with making Chinese food at home, because it doesn’t measure up to what I have had in a restaurant. This recipe had it all: a few simple ingredients that were quickly put together and a very tasty result. I was concerned that the thinly sliced ginger would be overwhelming (I usually grate it) but in combination with the Szechuan peppercorns, chiles and garlic, the flavor was a little hot, a little spicy, but blended wonderfully, so that each ingredient contributed flavor but didn’t overwhelm. The crunchiness of the peanuts was a perfect foil for the softer chicken, and the scallions added just a touch of onion flavor. My testers loved it, and I will definitely make it again.

I love Chinese food (used to teach it) and am always willing to try a new Chinese recipe. This dish was definitely a winner. I substituted boneless chicken thighs for the breasts ,simply because I already had them in my freezer. The dish was easy to put together, and my only regret is that I didn’t double it. Everyone I served it to would have liked more. I would have liked a little more sauce, and next time I’ll double the sauce ingredients. Also, I would highly recommend putting the Szechuan peppercorns through a pepper grinder, because it can be annoying to bite into them when eating the dish. I would also recommend sautéing both chili peppers but add only one to begin with. Then, when tasting the dish, you can add another if you want more heat. If you add both peppers and it’s too hot for your taste, there’s little you can do about it. By the way, I recommend doing this with any dish calling for hot peppers.

I love how quick, easy and flavorful this dish is. It had just the right amount of heat and was on the table in a flash. One testing note: the recipe calls for one teaspoon of Szechuan peppercorns. I had to assume that the author want them added whole. I did. I recommend grinding the peppercorns to reduce the textural presence in the dish.

This is a solid version of Gung Bao Chicken, which is particularly easy to make, because this recipe does not have you partially cooking the meat first and then removing it from the wok. Because the garlic and ginger are added near the end of cooking, they stay “hot” — the flavor is not mellowed by longer cooking. So there is a definite bite to it. I used Tien Tsin chiles for this, crumbled along with their seeds. I used one extra chile, which made the dish spicy, but not overly so. In the future, I would choose to make this with chicken thighs instead of breasts — just a matter of personal preference.

This stir-fry was a big hit in our house. Not only was it very quick and easy to make, it was also quite flavorful. Despite the chopped dried chiles and peppercorns, it was not very spicy. We served it with simple sides of steamed rice and steamed broccoli. I would definitely make this again, because it is so easy to make on a weeknight for dinner, and we usually have all the ingredients on hand.

Delicious, easy and fast. Great for a quick weeknight supper, since I always have boneless chicken breasts on hand. Next time I might add a vegetable like zucchini, but it’s great as is. This is a keeper!

This is a quick, easy and authentic Chinese recipe that everyone should have in their culinary repertoire. Oh, and I should mention that it is absolutely delicious too. With just a handful of ingredients that you may already have in your pantry, this may become a weeknight staple for your family.