This baked chicken with cinnamon butter is an incredibly easy dish made by rubbing a whole hen with cinnamon, garlic, and peppercorn compound butter and roasting until tender.

Make the cinnamon butter in larger quantities and store it in the freezer, keeping a small jar in the refrigerator for current consumption. A simple green salad with a very light dressing is the best accompaniment.–Elizabeth David

What else can I use this compound butter on?

The butter also works well with pheasant. (For a young bird of about 1 3/4 pounds, the timing and temperature are the same as for the chicken, but the pheasant should be wrapped in well-buttered parchment paper or foil.) We think that it would also be incredibly good on steak.

What can I substitute for brined green peppercorns?

Simply underripe black peppercorns, the brined green variety is made from fresh, rather than dried, peppercorns. You can substitute crushed green (or even black, pink, or white) dried peppercorns. Be aware that black will be quite a bit hotter and the pink and white will be milder so adjust to taste. You can use capers for the salty, briny flavor but otherwise, the taste isn’t all that similar.

I don’t like cinnamon. Is there any other spice combination I can use on this roasted chicken?

Ground coriander, cumin, and/or ginger can be combined with the cinnamon or used in place of it, and the proportions can be increased or diminished according to taste. 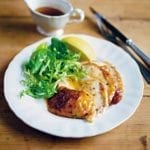 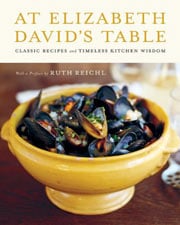 For the cinnamon butter

The combination of green peppercorn and cinnamon is an intriguing twist to your usual baked chicken. I was a bit skeptical at first, but this recipe proved me wrong. I’ll definitely make this delicious chicken again.

Do let the chicken sit on the kitchen counter all buttered and spiced, as suggested. It brings the bird close to room temperature, which cuts down the baking time, leaving the chicken moist. It also gives the salt and spices time to permeate the meat.

For “a shallow baking dish into which it [the chicken] will just fit,” I used a 9-inch deep-dish ceramic pie pan and it was just right for my 3-1/2-pound bird. For the side I cooked some long-grain rice and folded in some fresh cilantro; the pan juices from the chicken were fantastic on it.

I couldn’t find jarred green peppercorns, so I used dried ones. I ground the spices just before making the chicken, and the fragrance of the peppercorns and cinnamon was just wonderful. My husband walked in and commented on how good it smelled, and all I had done was grind two spices in a mortar and pestle!

I cooked a chicken just a bit larger than the three and a half pounds called for, and an hour and a quarter was perfect timing for a very moist, juicy bird. This isn’t a strong-flavored dish, but very aromatic. There was quite a bit of butter in the pan juices, so I dressed some greens with just a drizzle of the butter & juices and a squeeze of lemon. It all made a very simple, yet delicious meal.

This is perhaps one of the nicest ways I’ve prepared chicken in a while. The hardest part was finding the green peppercorns. That involved a trip to a couple of stores before I was able to locate them. After that, it really was a breeze. I used the chicken I had on hand, which was two whole chicken breasts, bone-in and skin-on.

Using a mini chopper, I put the two teaspoons of drained peppercorns and one half of a garlic clove into the bowl and gave them a whiz to roughly chop. I added in the cinnamon and whizzed again to a purée. I put the three tablespoons of butter into a small bowl and mixed in the contents of the mini chop bowl. Since I used salted butter, I didn’t add any additional salt to the chicken flesh, however, I did give a dusting of freshly ground salt and pepper to the skin before putting it into the oven. I put two bay leaves under each breast.

I allowed the roast chicken to rest while I finished preparing a simple salad. This chicken was flavorful, juicy, and tender, a real achievement since the breasts can get dry and stringy with roasting. I’ll happily make this again. Next time, I might change the cinnamon for five-spice powder and add some ginger in addition to the garlic. Cilantro, ginger, garlic, and lemon zest might be good too.

I loved the chicken, the taste, the combination of flavors. The recipe forgets to tell the reader to truss the chicken or do something with it after applying the compound butter. Otherwise, it is just splayed there in the baking dish. I baked it un-trussed. Not pretty, but absolutely delicious. Loved the flavor combination of the cinnamon and green peppercorns.

WOW! This chicken was wonderful in an odd way, almost too hard to put into words. I should start by saying I did chicken breast without the skin. I basted both sides of the chicken with the butter mixture (which I made in my little hand chopper—the kind you can use to take out your frustrations).

I was so sure this odd combination was going to be poorly received by my family that I had a backup dinner plan and made an extra side dish. When the chicken was ready, I served each plate and waited for someone to say something, but the dinner table was silent and the chicken was disappearing faster than I could have imagined. My husband called it “savory cinnamon toast chicken,” and I guess that is as close as I can put into words.

It is savory, but with a definite cinnamon flavor. It was like no other chicken dish I have ever made before, but so easy and so good. I didn’t add the optional cumin, coriander, or ginger because I wasn’t sure what the chicken would taste like alone, but I am tempted to try some other variations soon. A great recipe for something very different, but amazing.