“I come from a long line of awesome ladies. This recipe was passed down from one of them.” So reads the original headnote to this recipe. We can only imagine how awesome all of the baking recipes from these ladies must have been based on the response to these bars, which also go by the name “Yum-Yum Squares.” Yum, indeed.–Renee Schettler Rossi

What is the difference between sweetened and unsweetened coconut?

This recipe calls for sweetened or unsweetened coconut – but it’s important to be wary of the difference. Your end result may have a different flavor or texture, depending on which you use. The difference between the two is more than just sugar content. Sweetened coconut is typically soaked in sugar or corn syrup, making it moist and heavy, while unsweetened coconut is dry and light. If you plan to use the unsweetened variety, you’ll need to add a bit of moisture to your coconut with water or oil. For each 1/2 cup of coconut, use either 1 tablespoon of hot water OR 1.5 teaspoons of oil +1.5 teaspoons of hot water, then allow your mixture to stand for ten minutes before adding to the rest of your ingredients. If you’re using unsweetened and also want to boost your sweetness level – just add a tablespoon of powdered sugar per 1/2 cup of coconut.

Coconuts are extremely beneficial and are a healthy source of fiber, iron, and protein. They’re a great way to add natural sweetness and texture to granola, oatmeal, and your favorite cookies and cakes. That said, as with all good things, moderation is key. 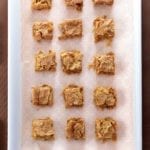 These coconut blondies, also known as yum-yum squares, are made with vanilla, coconut, and walnuts. They are obscenely rich, fudgy, and every bit as impossible to stop eating as the name suggests.
Prep 15 mins
Cook 20 mins
Total 35 mins
Dessert
American
16 squares
129 kcal
4.50 / 2 votes
Print Recipe 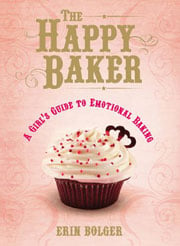 Everyone who takes a bite of these coconut blondies immediately makes the noise “yum,” you just can’t help it! I have made this coconut blondies recipe 4 times in 2 weeks because they are now what my family suggests when I need to make a dessert.

These were delicious and like an easier version of Congo Bars. I particularly liked that they did not use sweetened condensed milk. Though the recipe didn’t specify, I used sweetened coconut with good results, though I would be able to eat more in one sitting if I had used unsweetened coconut.

Everyone I had taste this recipe rated it anywhere from an 8 to a 10. It’s a very quick and easy dessert to put together.