This banana cream pie from Marie Howard is as classic as they come. Buttery crust, creamy banana custard, and pillowy meringue make this an enduring favorite.

Adapted from | Making Piece: A Memoir of Love, Loss and Pie | Harlequin, 2012

This is the banana cream pie recipe that prompted my parents’ marriage proposal, the pie that is the reason I was born.–Beth M. Howard

Beth M. Howard has every right to call this banana cream pie recipe her own, for many, many reasons—all of which are explained in the beginning pages of her memoir, Making Piece. Although after you make her mom’s banana cream pie, we think that you, too, will consider it your own. Pie oh my. Um, pie o’ mine? 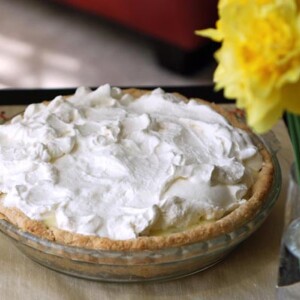 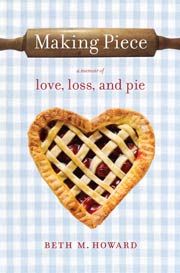 Banana Cream Pie is just about the best dessert on the planet, in my book, so I was anxious to test this recipe. I also have never thought I was very good at making pastry, although I keep trying. This may be the best pie crust I have ever made. I only added about 2 tablespoons of water and I think that made a big difference in the crust. Also, I grated the butter and the shortening after placing both in the freezer for 20 minutes. By doing this, I didn’t work the dough much at all. I also refrigerated the dough before rolling it out. I refrigerated the dough for 30 minutes before baking. The filling came together as written. I also topped the filling with the meringue while the filling was still warm, as I think this helps to somewhat cook the meringue on the bottom while the top is browning. All in all ,this is a very good banana cream pie and I will be making it again!

This Banana Cream Pie recipe is an easy one—and one that can be adapted to make almost any cream pie that you crave. The filling is not flavored by the banana, so you could use just about anything you please as the fruit to line the bottom of the pie shell. It took my filling about 8 minutes on the stovetop o come to the thick and bubbly stage. I did not need any of the reserved flour to thicken it, it did a fine job all by itself! The pie crust recipe is just enough for one shell. I used half butter and half lard and it yielded a flaky, delicate, delicious pie crust. It’s a beautiful pie—that meringue was noteworthy! I had so much left over even after piling so much of it on the top of the pie that it resembled something atop a mountain in Austria. I used the rest that I had left over for some meringues. Good, comfort food, sweet stuff!