The secret to these pan seared scallops in butter is to cook them in a hot skillet with ripplingly hot oil and occasionally baste them with butter. That’s it. Simple, quick, and impressive. Twenty minutes from fridge to table.

Look no further for how to make perfectly seared scallops that turn out perfectly golden brown on the surface, ever so slightly wobbly on the inside, and sweetly supple through and through.–Renee Schettler Rossi

What kind of pan is best for cooking scallops?

A cast-iron skillet. No doubt. The sturdy metal not only retains heat well, but it also heats evenly. That results in that beautiful golden brown sear that we so covet on our scallops, chicken, pork chops, steaks, and more. You’ll often see recipes call for nonstick skillets to sear food to avoid sticking. But they’re made of flimsier metals, which means they throw heat less efficiently, ergo a less lovely sear.

How do you prevent scallops from sticking to the skillet?

The secret to preventing scallops (or any protein) from sticking is simply to be patient. Rather than nudge and poke your them worrying about them sticking, trust that when they’re properly seared, they’ll release from the skillet. If they don’t, then it’s not ready yet. Try again in a few moments. When it’s had enough time, it’ll let go. 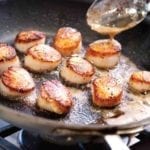 The secret to these pan seared scallops in butter is to cook them in a hot skillet with ripplingly hot oil and occasionally baste them with butter. That’s it. Simple, quick, and impressive. Twenty minutes from fridge to table.
America’s Test Kitchen
Prep 10 mins
Cook 5 mins
Total 15 mins
Mains
American
2 servings
194 kcal
4.95 / 18 votes
Print Recipe 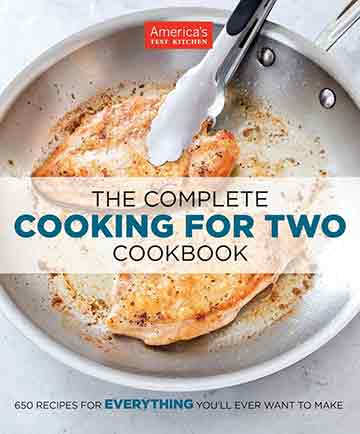 Seared Scallops with Lemon Brown Butter Cook the scallops as directed above but serve with this sauce on the side: Cook 2 tablespoons unsalted butter in a small saucepan over medium heat, tilting the saucepan constantly, until the butter turns golden brown and has a nutty aroma, 3 to 4 minutes. Add 1 minced small shallot and cook until fragrant, about 30 seconds. Remove the pan from the heat and stir in 2 teaspoons minced flat-leaf parsley leaves, 1/4 teaspoon minced thyme leaves, and 1 teaspoon fresh lemon juice. Season with salt and pepper to taste.

Loved, loved, loved this scallop recipe—so much so that I wanted more after eating them for dinner, woke up thinking about them and decided that they would be dinner that next night, too. We even scrapped plans to go out to dinner in order to eat these again. And you know how sometimes when you have something again, it doesn’t live up to what you experienced the first time? Didn’t happen here.

I should have prefaced this by saying that I like scallops that are allowed to shine on their own. These do just that. I also believe in using a cast-iron skillet to sear mine. I just couldn’t use a non-stick skillet. The technique of adding the butter and basting the scallops as you cook them is fabulous. No burned or blackened butter. No over-done scallops. Just succulence.

And the butter that’s left in the skillet? Pour it over the scallops. We dipped them in that butter. We also dipped a marvelous green rice that I had made to accompany. Oh, so delicious.

While I’m waxing poetic, I’m going to mention that that these sea scallops are so very quick and easy to make. You want something really good that will cook in no more than a few minutes? This is it. You can’t heat up prepared food, whether fresh or frozen, this fast. You can’t get take-out or delivery this fast.

I will also mention that even though previously frozen scallops are not ideal, you can definitely use them and get them to sear. (Scallops that are not previously frozen can be extremely difficult to find. I decided a while ago not to let that stop me. I defrost the scallops with paper towels under them as well as over them. I do need to change the paper towels a few times till they are defrosted and “dry.”) I’m now able to achieve beautifully seared scallops that I can enjoy even when fresh aren’t available. Wouldn’t want to be scallop-deprived.

These scallops are easy and delicious. What more can one ask from a simple Sunday dinner? This was my first time making seafood from beginning to end, and I have to say, it’s definitely a recipe I’ll make again.

I used a cast-iron skillet to sear the scallops, and I had no problem with the butter burning. The sauce became nicely brown, and the timing worked out perfectly.

And even with the absence of lemon wedges that my mom forgot to buy, the scallops were still amazing. For the rest of the meal, I prepared a fresh green garden salad with bacon and I served the scallops on top along with their buttery sauce.

This seared scallop recipe was a real treat. I used a stainless steel pan. After the first side was seared, I added the butter, flipped the scallops, and turned off the flame. They were done perfectly in less than a minute.

I made the lemon browned butter variation, which I prepared ahead of time and added to the skillet just before the scallops were done, and this was a very special splurge for a weekday supper!

If you follow the instructions in this recipe, you’ll get perfectly cooked scallops with a nice, crisp crust. Butter-basting is a technique used by restaurants that evenly sears the scallop while imparting flavor. The technique isn’t a new one, but it works well, and adding the butter in the second half of cooking prevents the butter from burning.

Be sure to follow the advice in the recipe and use only “dry” scallops. Also make sure they are completely dry before searing them. Also make sure your pan and your oil are very hot. I agree that the oil shouldn’t be smoking hot, but rather good and hot, which is indicated by the oil shimmering in the pan.

I didn’t want to take a chance with a nonstick pan, so I used a cast-iron pan. I knew this would give the best possible crust while allowing the center to cook to the perfect degree of doneness. I turned down the heat when I added the butter to ensure that the butter would brown rather than burn. I made the variation with the lemon browned butter, which is a classic combination with the scallops.

These seared scallops were sweet and delicious and simple.

My butter got very, very brown. Next time I’d probably take the pan off the heat after flipping the scallops, and just baste them and finish the cooking off the heat. I transferred the them to a plate and squeezed some lemon over them. The scallops were nice and brown on the outside and tender and juicy on the inside.

These were fabulous—nicely browned and perfectly done. I followed the instructions as written using an All-Clad nonstick skillet, but only turning the heat to medium because my stove and skillet both get really hot. I cooked the sea scallops for 90 seconds per side and was pleasantly surprised that they were done and opaque in the center. The butter baste helped the browning and gave the scallops quite a nice flavor.

This recipe was a home run. This is truly a recreation of what would be served in a fine restaurant and, if you’re using gas, it works well for adapting to the lower BTU temps of a home stove. My stove is electric and can achieve much higher temps.

There’s a difference in the types of scallops mentioned and the quality is very noticeable. I found wild scallops were superior to the ones at the local fishmonger so I opted for them. They were all natural, very pink, and also a nice size. It’s very important that there is very little moisture in them or they’ll steam before they sear. A good gentle squeeze between paper towels will do it.

This dish was incredible and made a nice presentation. My tasters (that is, my family) loved it. This will be made again for sure. The timing will have to depend on the size of the scallops, because it took more than double the noted time for the scallops I had. In addition, especially if you’re using a cast-iron skillet, remove it from the heat for a minute before adding the butter, then return it to the heat so the butter doesn’t burn.

I personally am not particularly fond of sea scallops, but my other half is, and as a treat I made this for her. As a result, I’m a convert. I found this to be a fun recipe, and there’s room to play since the basic recipe allows for a creative approach.

Some high-quality scallops and just a couple minutes produced a really delicious meal for the sea scallop lover in my family.

I used my cast iron enameled skillet and found that when I went to turn the scallops the crust had stuck to the pan on most of them. I suppose it meant that they were not quite ready yet. Those that kept their crust had a beautiful color. I turned down the heat as I basted it with butter and had to watch carefully as the heat quickly browns the butter. They were perfectly done when I served them.

The cooking technique led to a significant cooktop clean-up for the person who cleans up after dinner…ok, that’s me. I assume that the splatter that was on the cooktop, backsplash, and floor indicated that I had not dried my dry scallops sufficiently.