These carnitas tacos are made with moist, tender pork shoulder, avocado, onion, tomatillo salsa, lime, and cilantro. Great party food for a crowd, a weekend dinner, or outdoor entertaining. 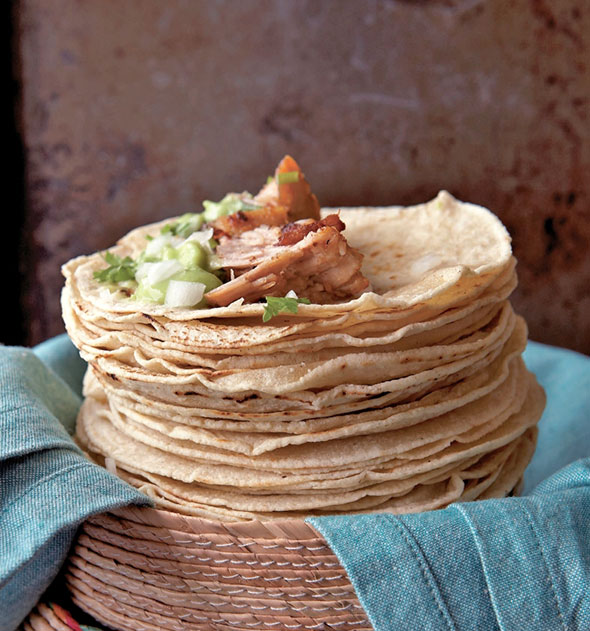 You’re strolling down the streets or through the markets in Mexico, and the aroma hits you. Immediately, hunger strikes. A minute later, you’re eating a little pile of tasty meat cushioned by a warm tortilla and electrified by a little salsa: carnitas tacos. Life is good.

My way to serve tacos at home is to set out a pile of carnitas or sliced steak or shredded roasted chicken, warm tortillas, a few bowls of salsa (if you’re ambitious, try spooning a couple contrasting salsas on a single taco), chopped white onion, cilantro, and lime wedges. Letting your guests make the tacos themselves, rather than assembling them beforehand, ensures the tortillas will stay warm and won’t get soggy. Originally published May 2, 2015.–Roberto Santibañez

Not just any tortillas will suffice for these standout carnitas tacos. You want the best tortillas you can make or find. Sometimes that means swinging by the store on the way home for whatever you can find, but sometimes, suggests author Roberto Santibañez, that means seeking out a local tortilla factory (you’d be surprised at how many there are, says Santibañez) or asking a local restaurant if they’ll sell you some of their freshly made tortillas or tortilla dough. For more tortilla tricks and techniques, check out the note below the recipe on how to best warm and store tortillas, whether you’re making tacos for yourself or for a crowd.

To whip up these carnitas tacos, set out everything on a table—the pot of hot carnitas, the stack of warm tortillas wrapped in a towel, the bowl of salsa, a dish of chopped onions, a mound of cilantro, and some lime wedges. Let everyone have at it, creating his or her own tacos by plopping a couple spoonfuls carnitas onto each tortilla, heaping on toppings as desired, and then adding a squeeze of lime at the end. Restraint is actually a good thing in terms of not overloading the tortillas, which can easily turn soggy and floppy. That’s why this recipe makes so many darn tacos—rather than getting greedy with the goods on a single taco, simply make yourself another…and another…and another.
Print Recipe

*How to Warm and Store Tortillas Note

I love this Mexican classic, and this carnitas tacos recipe creates exactly what I was looking for in terms of taste and texture. The fresh tomatillo salsa was delicious, creamy, and added a nice balance to the rich meat.

Does it get any easier than these carnitas tacos? I don’t think so. This recipe worked exactly as written and produced an incredibly great-tasting pork that is fantastic in tacos.

This carnitas tacos recipe is quite the little ace in the hole. It’s so easy yet yields so much flavor. A little bit of prep work, then throw it in the pot and go about your other kitchen tasks—like making tomatillo salsa. There’s a little checking and stirring here and there, but the dish practically makes itself. Don’t forget to keep the lid off while simmering away.