While these mushroom mashed potatoes are good with meat, they also make an outstanding accompaniment to fish. It’s an unexpected pairing but one that you’ll find satisfying.

The flavor of these chanterelle mashed potatoes is simply a delight. It is great served with meat. A rather unfamiliar pairing that is common throughout Nordic countries—and one I have been forced to come to terms with—is mushrooms and fish. Try it for yourself.–Simon Bajada

With just potatoes, milk, butter, thyme, and mushrooms in this chanterelle mashed potatoes recipe, you’re going to be tasting some earthiness. It’s a good thing if you’re into mushrooms. Heck, it’s a phenomenal thing if you’re into mushrooms. Just saying, with the chanterelles definitely the alpha ingredient, this recipe probably shouldn’t replace your classic mashed potatoes at the traditional Thanksgiving table. Though it could definitely make an admirable stand-in should your family be the sort that welcomes a little lawlessness. 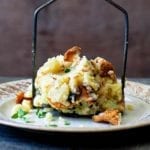 While these mushroom mashed potatoes are good with meat, they also make an outstanding accompaniment to fish. It's an unexpected pairing but one that you'll find satisfying.
Prep 10 mins
Cook 25 mins
Total 35 mins
Sides
American
6 servings
225 kcal
4 from 1 vote
Print Recipe 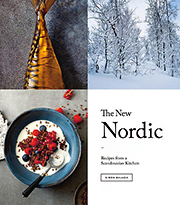 Wow! These chanterelle mashed potatoes are delicious. A refined, fancy, gourmet wonder. They take no more time than regular mashed potatoes, but they deliver so much more! I usually prefer Yukon Golds for mashed potatoes, but I wanted to see how russets would work. When I make this recipe again, and I will be making it often, I will try Yukon Golds. However, the recipe didn’t suffer at all being made with russets. While the potatoes cooked, I sautéed the chanterelle mushrooms. Refrain from trying to get them to become golden. Just cook them till they start to soften and have released some of their liquid. Then put the pan aside. I used a potato ricer to get the potatoes mashed and fluffy. I put the milk and butter into a Pyrex measuring cup and warmed the mixture up in the microwave. That saved a pan to wash and also made it easy to pour the mixture into the potatoes. I used up all of the buttery milk mixture because we like our mashed potatoes creamy. I then mixed the sautéed chanterelles into the potatoes. The combination was divine. This recipe, with the thyme and the chanterelles, is a true winner. Don’t be tempted to use a cheaper mushroom. The chanterelles make all the difference. I’m planning another meal just so that I can make these potatoes again. I served this first batch with a gorgeous, medium-rare bone-in rib eye steak. A perfect match.

You can never go wrong with serving mashed potatoes as your starchy side at dinner. But creamy mashed potatoes studded with meaty chanterelle mushrooms?! Quite unique! I was unsure if I would be able to find these lovely mushrooms, but alas, was pleasantly surprised when I did. Such a lovely shade of tan, these large meaty mushrooms really benefited from the quick sauté in a touch of oil, butter, and fresh thyme.  On their own, they’re fragrant and yummy, but stirring them into creamy mashed potatoes was decadent and enjoyed by all. This recipe would definitely work with any other kinds of mushrooms you can get your hands on—creminis would be nice, or maybe even wood ears or shiitakes? Or a mix? In terms of the recipe itself, I used Yukon Gold potatoes here and quartered each of them before boiling. It took approximately 15 minutes until they were knife-tender.  (I didn’t use white pepper here, just regular black pepper, as I find white to be a bit overpowering.)  I mashed my potatoes until smooth with a potato masher. I only used 1 cup (8 ounces) whole milk, and they were perfectly creamy. I served these lovely spuds alongside a traditional meatloaf and roast broccoli with lemon—a comforting dinner in which the chanterelle mashed potatoes were the star of the show!